Part 1 and 2: At COP 27, The World Called Out for Climate Justice

On Saturday November 12th, a few of us gathered early at Matt Cohen Park, Spadina and Bloor, on Dish with one Spoon and Treaty 13 territory, to prepare for the "At COP 27: The
World Calls out for Climate Justice” event. Folks worked on setting up a live video feed, unfurled and admired the beautiful hand painted banner, wheeled in the sound system, handed out megaphones and checked in with presenters. One by one and in small groups, others arrived until we had a sizable crowd and the first speaker breezed in, right on cue!

At the same time, on the ground in Egypt at COP 27, where governments from across the world met to decide what steps to take in response to our disintegrating climate, severe human rights violations made it dangerous for civil society to monitor and protest the actions of a corrupt government.

Yet, the work and full, free participation of civil society is essential to counter the ongoing power and profit motives that harm both people and the environment. In response, Egyptian and African civil society groups called for a “COP 27 Global Day of Climate Justice.”

Climate justice does entail reducing emissions rapidly (which many countries are failing to do), but it is also about equity and human rights. At COP 27, fair share climate funds and “loss and damage” for poorer countries who are the least responsible for climate breakdown but suffering the brunt of it, were central.

Rich countries like Canada need to repay their climate debt and heed the calls of the Most Affected Peoples and Areas. 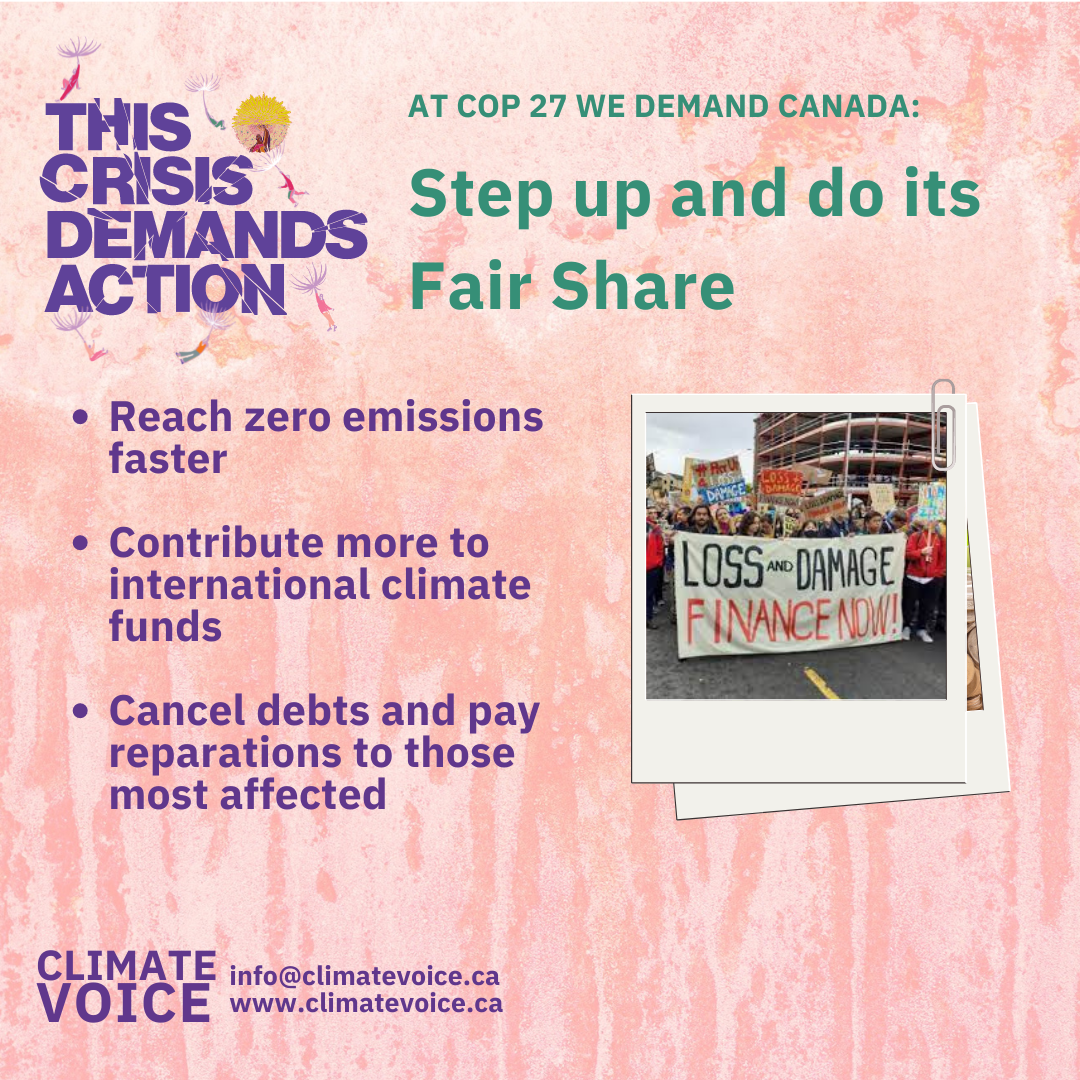 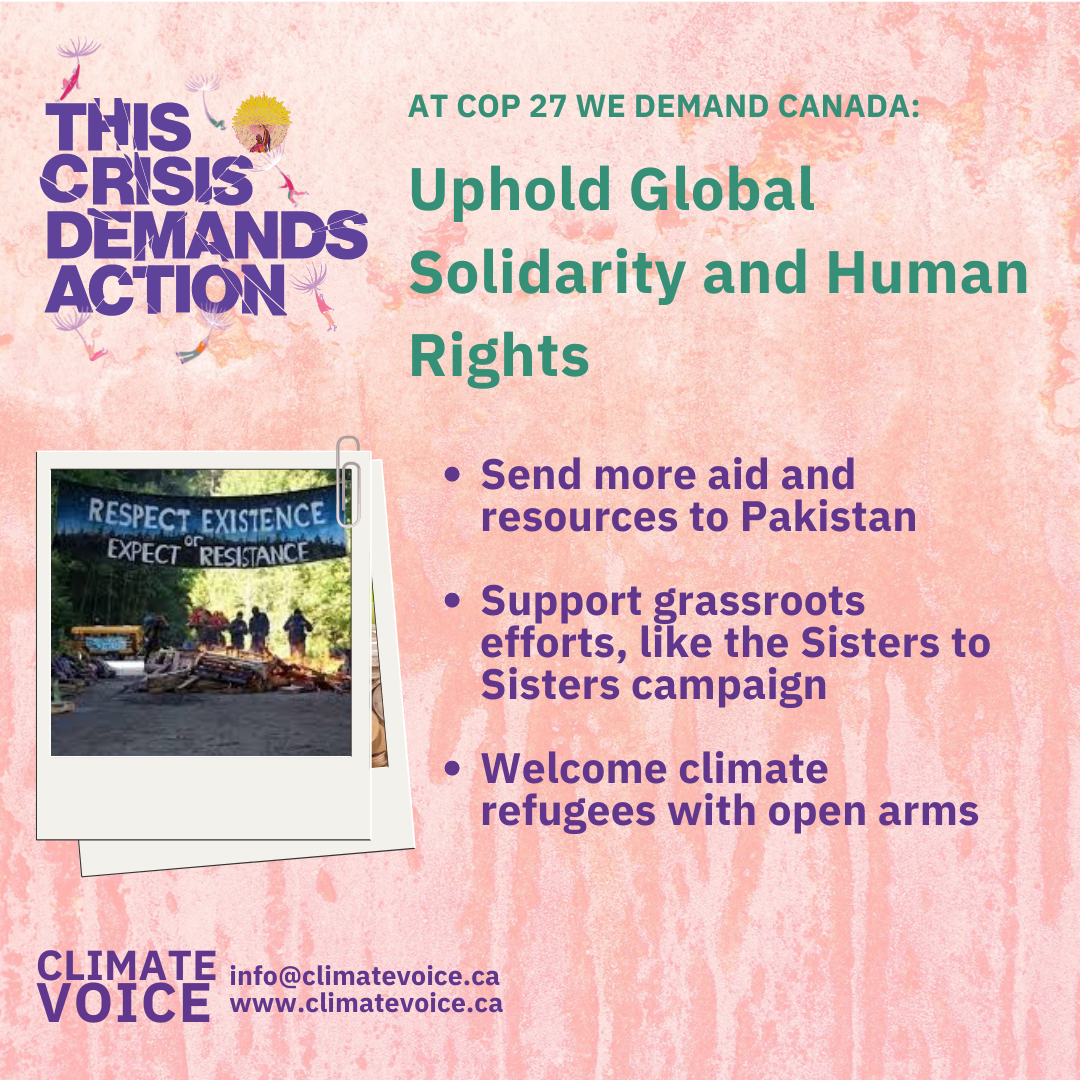 One of the countries most impacted and currently going through devastating floods, is Pakistan. At least 33,000 million are displaced. For comparison, the entire population of Canada 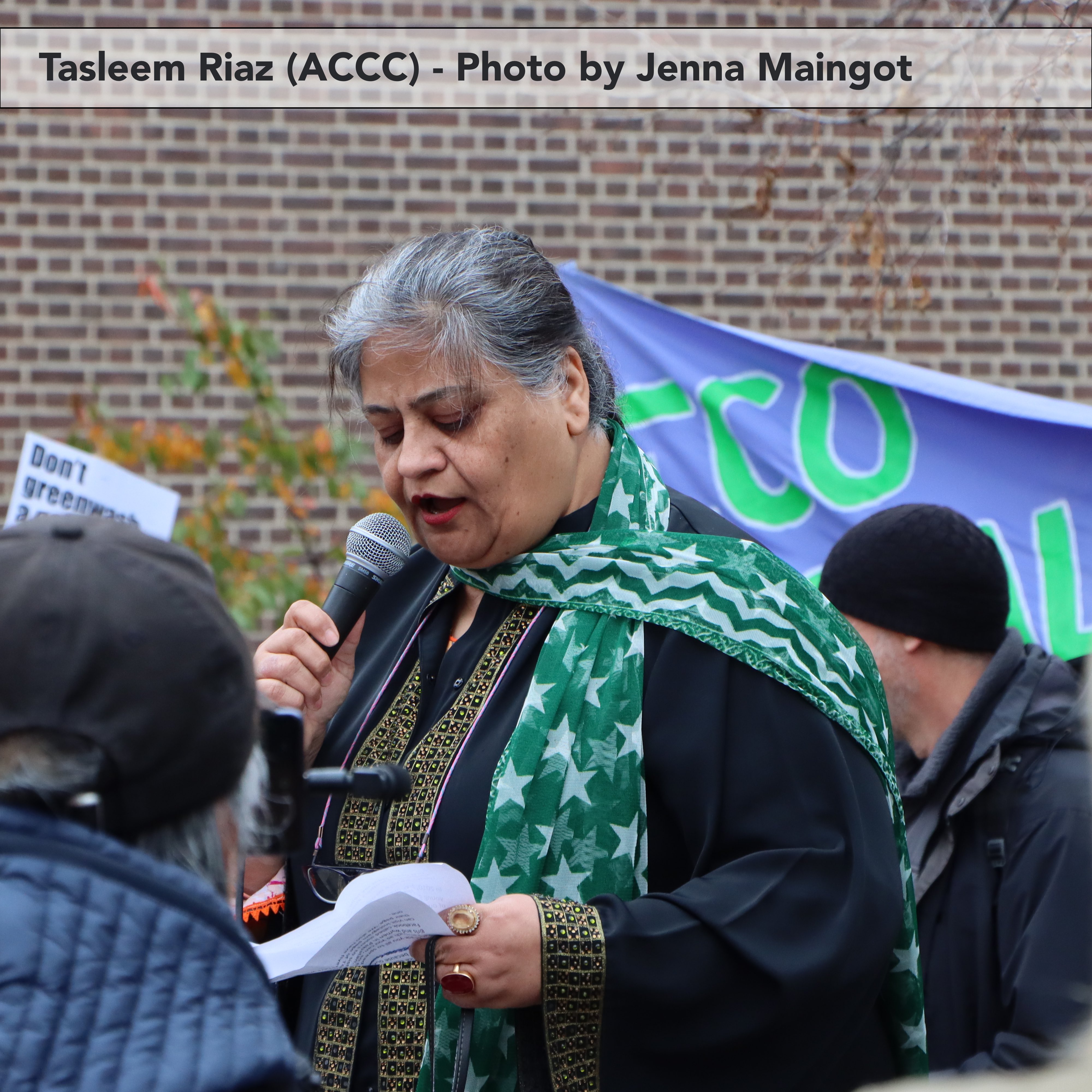 The first rally speaker, Tasleem Riaz, co-founder of ACCC, stepped onto the marble domino sculptures and backed by Pakistani flags, spoke of the Sisters to Sisters initiative to provide supplies to remote regions in Pakistan.

She explained that in 2010, PCC and ACCC “....provided flood relief to 10,000 women and girls. All of the world at the time reached out to help Pakistan but being a woman I understood that needs of women are different than needs of men….This was the [reason for the campaign] to help this segment of society whose needs are often overlooked during natural disasters.”

She finished by saying, “once again, ACCC has initiated the Sisters-to-Sisters campaign…I ask you all to spread the word of our campaign and help us as much as you can so that we may once again help young girls and women in Pakistan.”

Pakistan is responsible for less than 1% of global emissions. As Atlas (Climate Justice UofT) one of the event MC’s articulated, the climate impacts endured there are “fundamentally unjust….this flooding was not a tragedy or a quote unquote ‘natural disaster.’ No, this was a crime and it was perpetuated by nations of the Global North who are…historically responsible for over 90% of all carbon emissions….”

With those percentages in mind, it doesn’t require major math skills to calculate that Canada’s fair share of climate action is much greater than Pakistans. Those in attendance at the rally - teachers, United Steelworkers, Indigenous folks from various Nations across Ontario, environmental activists, to name a hand full - marched to call attention to this need for climate justice. 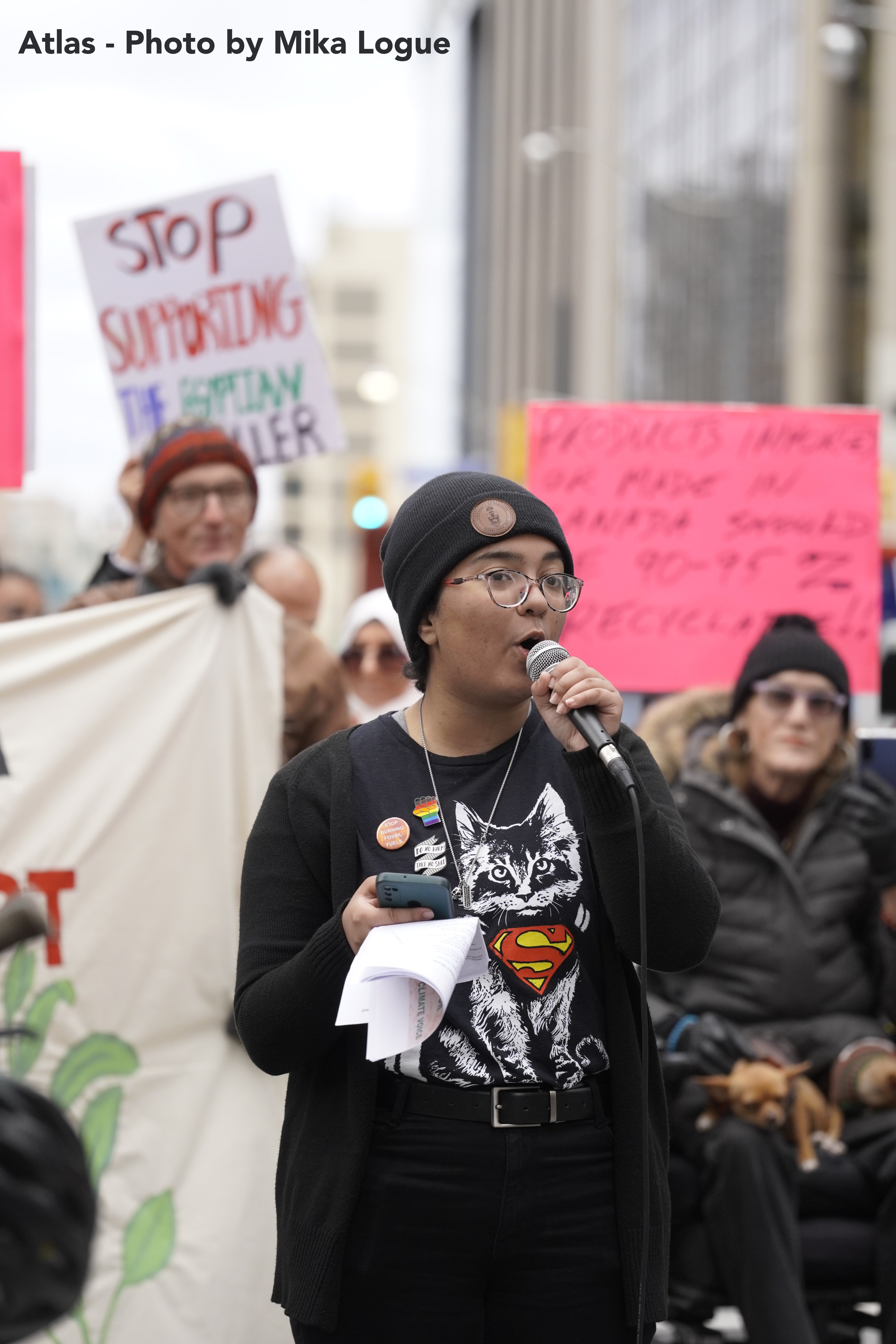 The November 12th rally for climate justice called out COP 27’s host Egypt as a police state and highlighted the danger of COP 27 greenwashing the dictatorship’s actions.

Atlas situated the need for human rights within Canadian borders as well, saying, “repression…is not something that’s limited or unique to Egypt or regimes of the Global South. In fact if anything, Canada could be considered a pioneer and a champion when it comes to human rights abuses, oppression of marginalized people and colonial violence. No one is doing it like Canada, no one has done it like Canada.” They made the point that the Global North enables undemocratic regimes for the sake of profit and many would not continue to exist without that backing.

Chanting, “What do we want,” “Climate Justice,” “When do we want it,” “Now,” the crowd, growing and ready for movement, marched down the road a short block or two, to Christia Freeland’s office. There, Hossam Almotaim (ECCD), took to the podium.

He began by saying that “we are the hope against all the corruption…we are the hope for justice…I wish that our words and our march….wish our message will be [strong] enough to change their reality….Egypt is full of human rights violations, human rights is dismissed there in Egypt.… A lot of people are forced to disappear, a lot of people are living their life in oppression.”

The work and full, free participation of civil society is essential to climate action and a just transition away from fossil fuels. Climate Justice is social and economic justice. 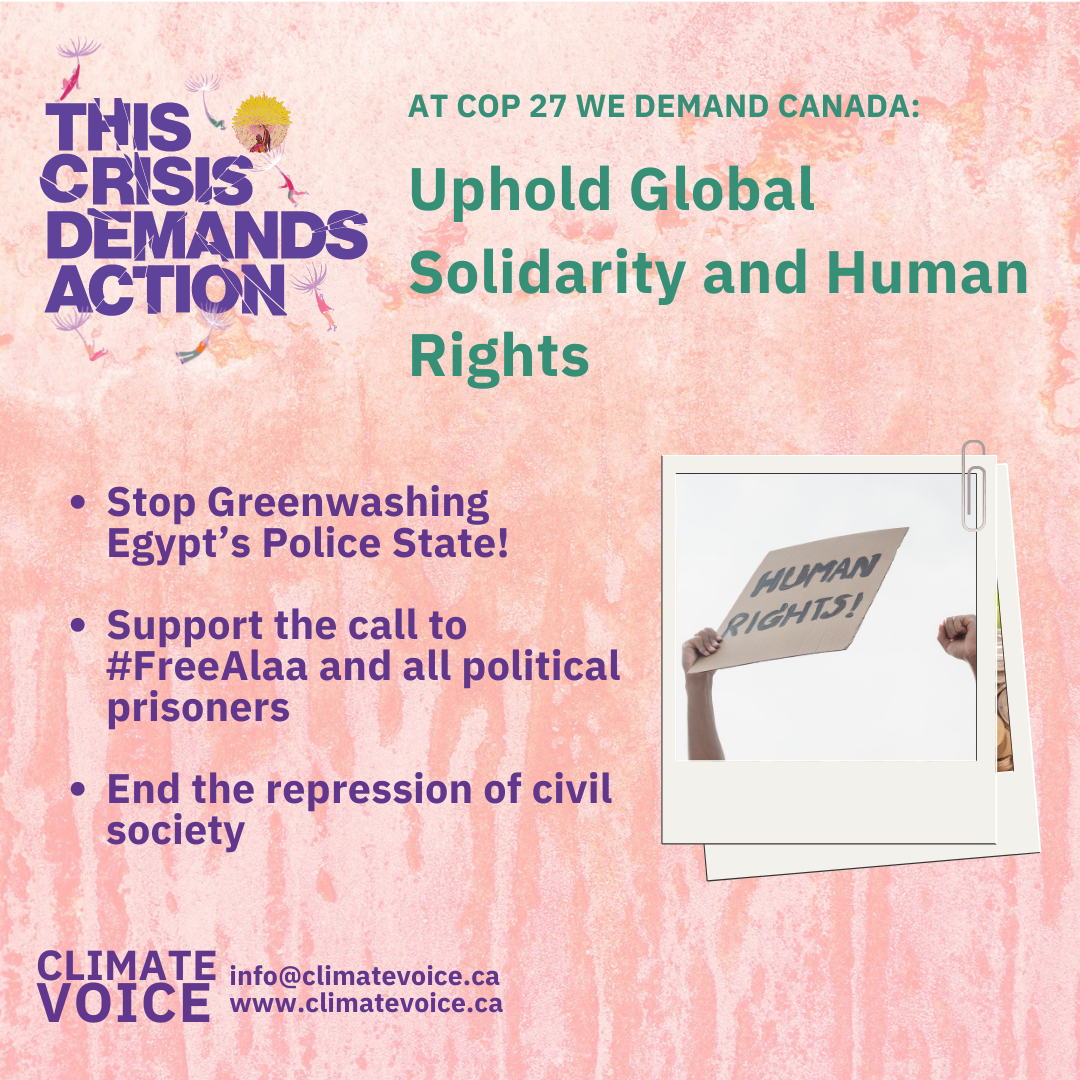 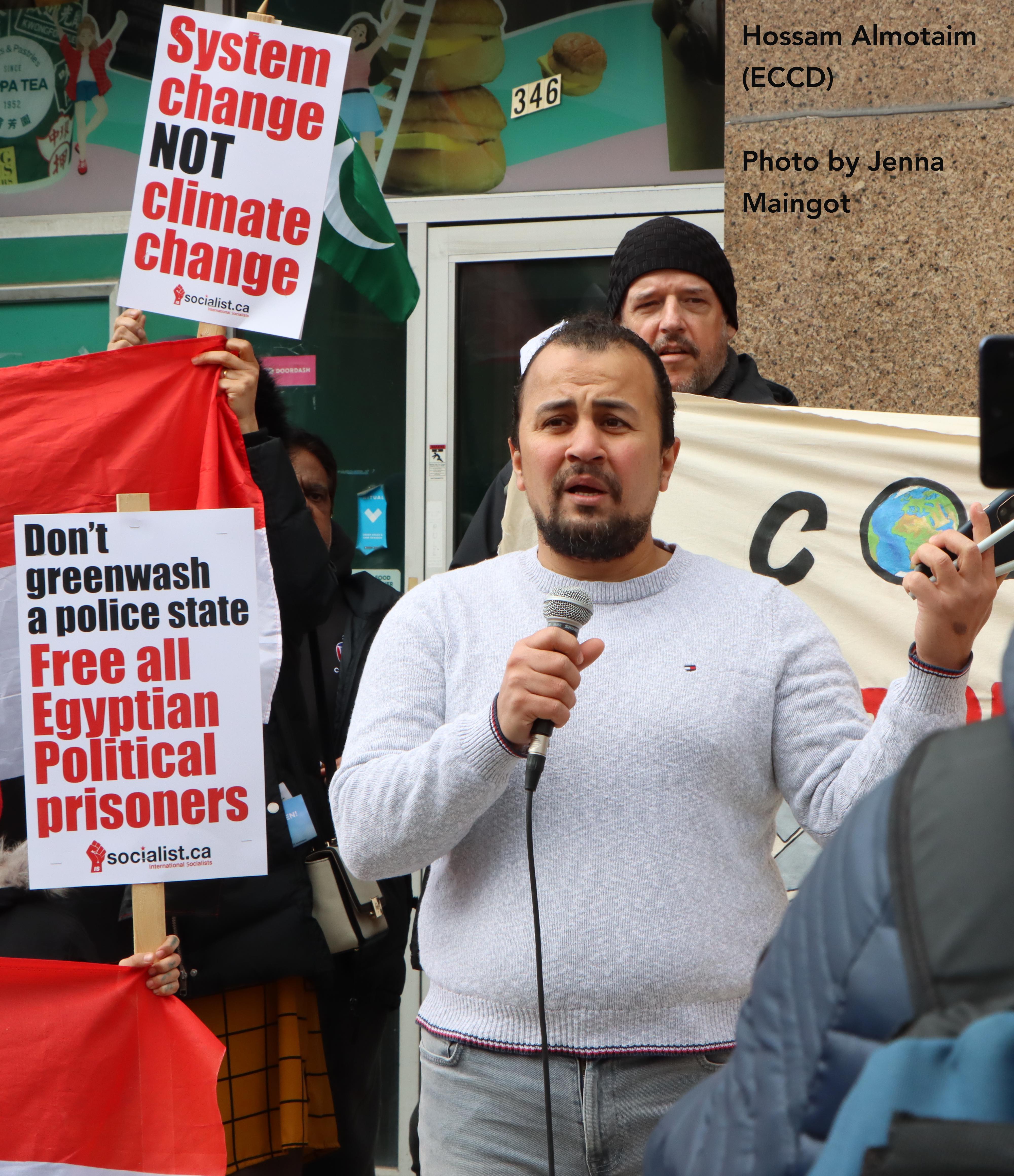 Continuing, he shared, “Right now, when I was driving to this march, my mom told me that her neighbour just passed away two days ago because she was attending at court for her husband and her husband got another 5 year sentence. He is a very innocent guy which made me very, very sad because this is not only just one, it's about 60,000 prisoners in Egypt… all of them, they are innocent, it's just that they are activists, they are looking for their freedom….So it is very [shameful] that the world leaders are okay with what’s happening now in Egypt.”

He said that “a lot of families, they don’t know where [their] father or mother or sisters or even young kids [are]….a lot of women are in prison, women in Egypt are very innocent people, they can not do a lot of stuff, it's not like Canada, but still Sisi sees them as [criminals] and give[s] them, some of them, a death sentence, which is a shame and unbelievable.”

“Egyptians themselves, they can not speak up, they can not say anything about the government or about…basic rights…A lot of people … they will be shot dead for protesting or will be arrested for unlimited time. The news of this, or of the death of political detainees due to lack of political care has become a daily norm for Egyptians.”

He voiced the ECCD’s support for the rights of all Egyptians to protest, to reject Sisi’s rule and to call for the release of political prisoners and demanded the same support from world leaders, asking that they put pressure on the Egyptian regime. 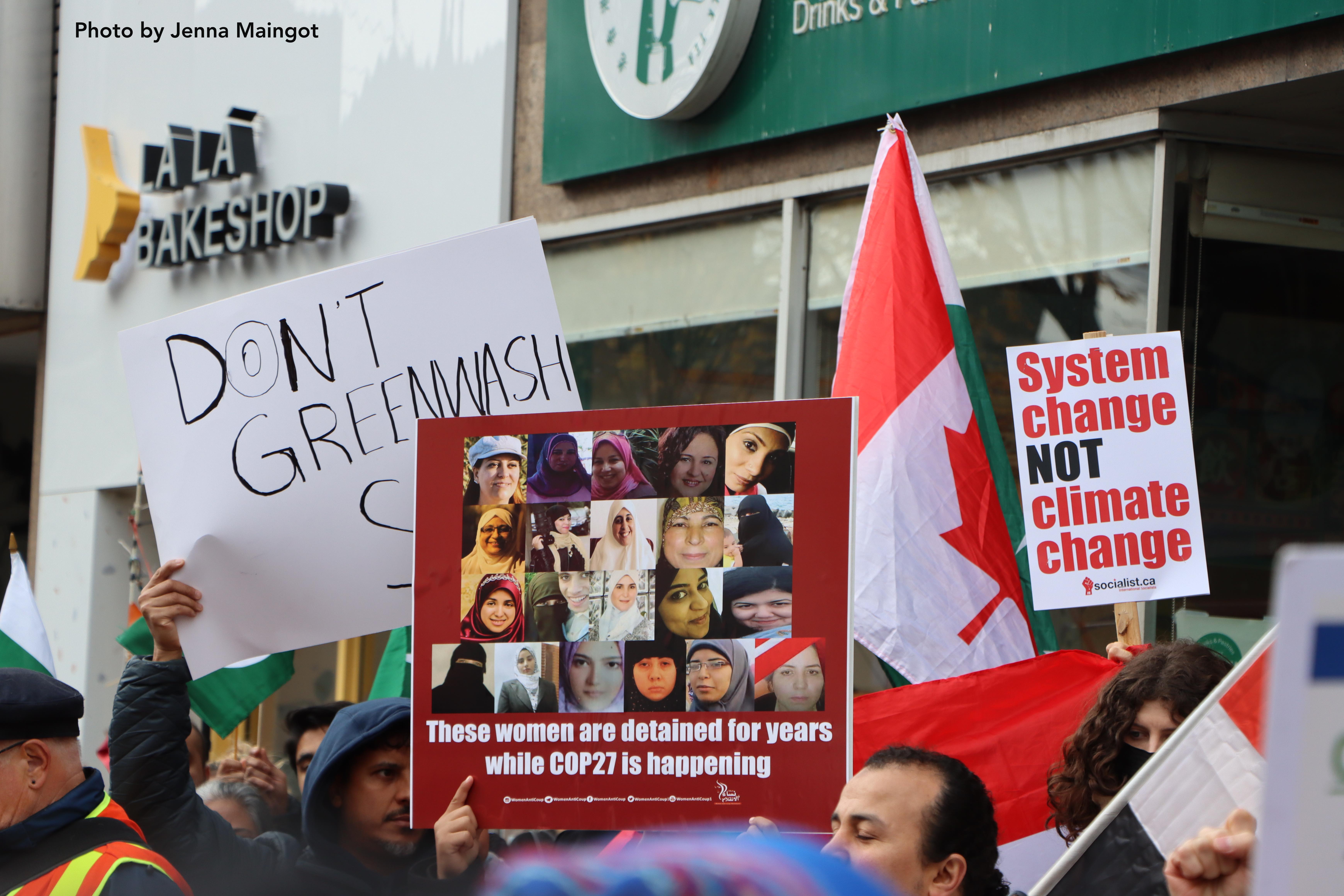 Finally, he declared that “[j]ustice in our view is one piece that includes all aspects of life, just like principles. It cannot be divided.
When a person is insulted and deprived of his freedom and all his basic rights, or [imprisoned], expelled and exiled from his land, you can feel that the earth is about to [explode underfoot]….We all must intervene and raise our voices with the highest power to tell everyone involved: enough is enough for all injustice and destruction.”

Human rights and climate justice are inextricably linked. Without them, we have little chance to make the global shifts needed to keep our planet at all livable - for everyone, for anyone. It’s the deepest hypocrisy for world leaders to meet in Egypt, professing to work on climate justice without calling out the repressive regime loudly and clearly.

After Hossam’s speech, the crowd of about 500, including families and dogs took the street again, joining Hossam in a chant: “Down Down to military coup, down, down Sisi regime, Canada, Canada, can’t you see, Sisi killed democracy.”