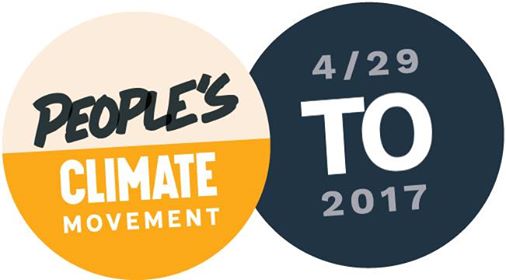 oin the People’s Climate Movement this April 29th in Toronto and around the world to stand up for our communities and climate.

Plans are underway by labour, environmental, indigenous, and social justice groups for a People's Climate March in Toronto on April 29th. This will form part of a North American Day of Action initiated by The People’s Climate Movement. The U.S coalition is calling for a massive march in Washington D.C and sister marches across the world, and the Toronto organizing groups have coordinated with the Climate Convergence in Vancouver and other organizations across the country. We are organizing the march to be the anchor event to a week of education and mobilization in April and a week of actions in May.

On April 29th we will be in the streets across Canada to show the world and our leaders that we will resist fossil fuel projects and policies that attack our people, our communities and our planet.

We invite you to join the Peoples Climate Movement on Saturday, April 29th as we march to:

• Advance solutions to the climate crisis that are rooted in racial, social and economic justice and committed to protecting front-line communities and workers.

• Protect our right to clean air, water, land, healthy communities and a world at peace.

• Demand recognition of Indigenous Sovereignty, respect for existing Treaties and the right of First Nations to Free, Prior and Informed Consent for all projects on their traditional and unceded territories.

• Immediately take steps to support immigrants, refugees and communities of colour and LGBTQ2I communities impacted by the attacks on them south of the border and by the dislocation caused by global climate change

• Ensure public funds and investments create good paying green jobs that provide a family-sustaining wage and benefits and preserve workers’ rights, including the right to unionize.

• Fund investments in our communities, people and environment to transition to a new clean and renewable energy economy that works for all.

• Protect our basic rights to a free press, protest and free speech

March with us on April 29th as we come together to resist and march for our families, our communities and our planet.

We will be holding a series of educational activities in the week prior to the April 29th rally/march, and using the energy generated by the March to direct people into a week of coordinated actions to create lasting change for all.

Use the hashtags #KeepItInTheGround #RespectTheTreaties #TakeToTheStreets #WaterIsLife #PCMToronto #ClimateJustice when posting about the March, or related events!

To get involved in organizing, or for more information contact: