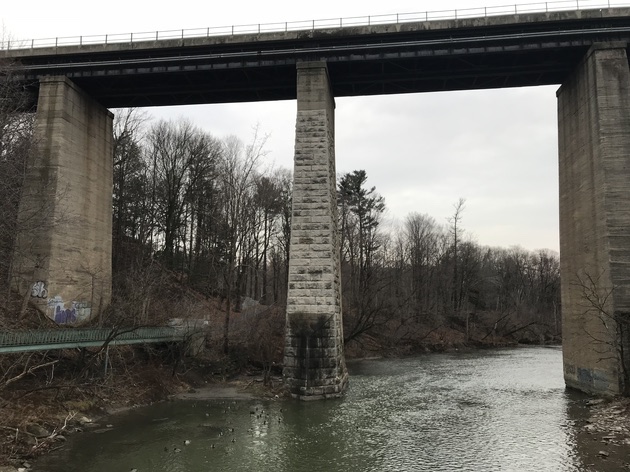 As the IPPC report, the recent Lancet report on health and climate change and others show, we are in a climate emergency and have very few years left to act, to keep global temperatures from warming over 1.5°C. Every incremental temperature increase matters, bringing with it more disastrous effects, such as life-threatening heat waves and extreme weather. As the environmental commissioner writes in her 2018 report, Climate Action in Ontario: What’s Next (ER Report), ”if we continue at current global emission rates, the toddlers of today will see severe, widespread and irreversible impacts, far beyond what they may be able to adapt to….Every tonne counts, and every action matters.”1

However, the new “Made-in-Ontario Environment Plan”2 states that we’ve done Canada’s “heavy-lifting” and cuts ambition by about 30MT, the same as Nova Scotia and New Brunswick’s emissions combined. As the plan states, the new target does match Canada’s current goals; but Canada’s current goals need to increase and fast! If everyone acted as Canada is now, we’d be on the way to 4-5°C! The new plan sets Ontario up for doing less at a time when back-tracking is increasingly dangerous.

A second big concern is that the plan is vague. Details are lacking, as are timelines and clear commitments. As Robin Edger, Ontario director at the Pembina Institute puts it in a recent National Observer article, the proposed plan "contains mainly aspirational statements and plans to make plans, without seriously demonstrating how the government will lead Ontario to a low-carbon economy.”3 For comparison, the former climate plan 4 included a table spanning 26 pages detailing actions, investments and expected GHG reductions.

The new environment plan does contain a promise to report back to us once the details are finalized. So, maybe the “plan” isn’t really a plan yet!? In any case, let’s continue to push for targets in line with keeping global temperature rise below 1.5°C. Let’s ask for a SMART plan - a legally binding one with specific details, science-led goals, the promise of regular, independently reviewed reports on progress and short as well as longer range timelines. Let’s ask for a plan that helps us all make and benefit from a quick transition off of fossil fuels.

There is an easy to send, customizable LeadNow petition letter for a People’s Climate Plan created by ClimateFast and Drawdown, here: https://www.leadnow.ca/MPP-peoples-climate-plan-ontario/. Please take a moment to tell your MPP why it is urgent that Ontario takes real climate action and what that looks like to you. Find more background information about the People’s Climate Plan here: http://www.climatefast.ca/peoples-climate-plan.

Here is a brief look at some of the ideas proposed in the new plan:

1) The plan includes the promise to make polluting industries pay their fair share for GHG emissions, but the details of the regulatory system are subject to consultation with the polluting industries themselves. The plan also cites the need to consider competitiveness and suggests that there might be exemptions “across the board for industries of particular concern.”2 There is no mention of steps to offset costs that may be passed on to consumers, or help for vulnerable Ontarians or even small businesses. As environmental defence states, the “only significant incentives here seem to be for large industrial emitters.”5

2) The Ontario Carbon Trust, “an emission reduction fund that will use public funds to leverage private investment in clean technologies that are commercially viable,”2 lacks details and resembles an Australian model that has failed to decrease emissions. Innovation, according to the plans “back of the napkin math,” is expected to result in %15 of Ontario’s planned GHG emissions reductions.

Funding is a real concern, as environmental defence puts it, “$400 million to support clean technology and a reverse auction (out of the $500 million for the whole plan) sounds like a lot. But there is no evidence that this will be enough to achieve the necessary reductions. What we do know is that this plan proposed $500 million in total funding over four years. Cap-and-trade provided $1.9 billion in a single year.”5

An unaccounted for $500 million from cap and trade had previously been earmarked for GHG reducing projects (that would also create jobs and help people transition to a low-carbon economy). Yet, there seems to be no plan to replace the funding that was recently cut for projects like school retrofits or municipal actions. TransformTO, for example, lost $52 million in funds for initiatives like replacing diesel buses with electric and district renewable energy heating/cooling systems.

3) It may be unclear exactly how it will come about, but the Ontario Carbon Trust and Innovation is expected to “speed up the deployment of low-carbon solutions.”2 Will this be enough to facilitate a quick shift to renewables and a net-zero carbon future?

According to the EC Report, Ontario spends over $11 billion a year to import fossil fuels, subsidizes the fossil fuel industry with about $625 million in tax breaks plus makes additional investments like grants for natural gas pipeline expansions that wouldn’t be economically viable otherwise. Also, last year, 752 renewable electricity contracts were scrapped. This move, according to the EC report, negatively impacted many initiatives and people including hydropower developments, First Nations, community energy cooperatives and conservation authorities.1

There is no mention in the plan of shifting the funds spent on fossil fuels to cleaner choices or reinstating the cancelled renewable projects. The plan does praise Ontario’s current clean electricity mix. Renewable natural gas, forest biomass and hydrogen are referenced as clean fuel strategies. Utilities will be required to have a voluntary renewable natural gas option. Here, they will also look into “the appropriateness of clean content requirements.”2

One good idea in the plan is to work toward climate-related disclosures in the financial sector. Revealing climate-related risks to investors could help ensure that the social cost of carbon is addressed more fully in our economic system and hasten the shift to lower-carbon choices.

4) Energy efficiency is a key component of climate action. The plan proposes to expand utility run energy efficiency programs. The outcome is subject to discussion with the Ontario Energy Board.

Former energy efficiency incentives were popular and generated economic benefits, including local jobs. The plan does not directly suggest that these will be restored. It does propose support for heat pumps and community-based district energy systems. It also says government will consider tax policy options for homeowners around energy efficiency. The promise to consult about voluntary display of home energy efficiency on homes for sale is potentially positive. Note: this was to be a mandatory requirement in the old plan.4

The promise to review the Ontario Building Code’s energy efficiency standards is critical and these standards should definitely be increased. In the previous plan, the government had a goal for new small buildings to be net zero carbon emissions by 2030 at the latest with the promise to consult on some changes effective by 2020. They also promised a training program for a low-carbon building workforce.4

5) Sixteen percent of emissions reductions are to come from a switch to low-carbon vehicles (mainly electric vehicles); but this number was calculated when previous electric vehicle incentives were still in play.5 According to the plan, emissions reductions in the transportation sector also depend on the federally administered clean fuel standard which hasn’t been implemented yet, and on upping the ethanol content of gasoline “as early as 2025.”2

There is a promise to make it easier for private investors to create low-carbon fuelling infrastructure to support the adoption of low-carbon vehicles “without government subsidies.”2 Yet, as long as low-carbon vehicles remain largely unaffordable in Canada and their adoption isn’t actively supported, will they continue to be a rare sight at car dealerships and will more private companies, like metrolinx, decide charging stations are not needed or economical?

Previously, the $136 million set aside for rebates on electric and hydrogen vehicles meant that Ontario’s market for these vehicles was growing 100% or more annually.1 Some of the cuts the Ontario government made to projects in early stages included a hydrogen train pilot, high-speed rail and electric bus programs.1

Ontario has made a $5 billion commitment for subways that falls outside of the plan’s parameters, but the plan itself mentions uploading the TTC to the province and sources warn, this might lead to privatization, increased costs for riders and increased emissions. An obvious omission in the plan is the lack of support for complete, compact communities that help Ontarians transition to public transit and more active transportation like cycling or walking. Note: the previous Ontario climate plan not only included active transportation, it mentioned telecommuting and flex-work.4

6) There are promises in the plan to work with and support current organizations and programs, like the Grassland Stewardship Initiative, the Nature Conservancy of Canada and the Lake Simcoe Protection Plan.

The plan does mention protecting the green belt, but contradictory policy was recently put forward in Bill 66 (and then retracted due to public outcry). The plan also proposes to modernize the environmental assessment process and mentions streamlining and reducing delays. One would hope that this does not affect any progress made by the old plan toward updating environmental assessments to account for climate change.

7) There are some good ideas in the waste section of the plan, like making producers responsible for the lifecycle of their products. However, as with the rest of the plan, many of the points are somewhat vague. Words like “considering” and “exploring” are used throughout.

Good ideas in the plan include: expanding green bin collection in big cities, exploring options to recover resources from waste, best practises for food donation, creating a plastics strategy and the commitment to develop a “proposal” to ban food waste in landfill (no commitment to the ban as of yet).

Ongoing, the more of us who speak out about the urgency of climate action, the better. It is important that your MPP knows that climate action matters to their constituents. ClimateFast created a People’s Climate Plan and a letter that is easily sent through LeadNow. You can find it here: https://www.leadnow.ca/MPP-peoples-climate-plan-ontario/. Find more background information about the People’s Ontario Climate Plan here: http://www.climatefast.ca/peoples-climate-plan.

2.Current Ontario Climate Plan details from “Preserving and Protecting our Environment for Future Generations A Made-in-Ontario Environment Plan”, Ministry of the Environment, Conservation and Parks, https://prod-environmental-registry.s3.amazonaws.com/2018-11/EnvironmentPlan.pdf