Motivated by the goal of avoiding dangerous climate change, American academic and author Bill McKibben founded 350.org in 2007. The group is committed to using creative non-violent means to build a global movement to address the climate crisis. Toronto350.org is a leading organization in the Toronto area pushing for climate justice. We are totally volunteer-driven and growing all the time, so please get in touch about how you can help confront this great challenge of our time. 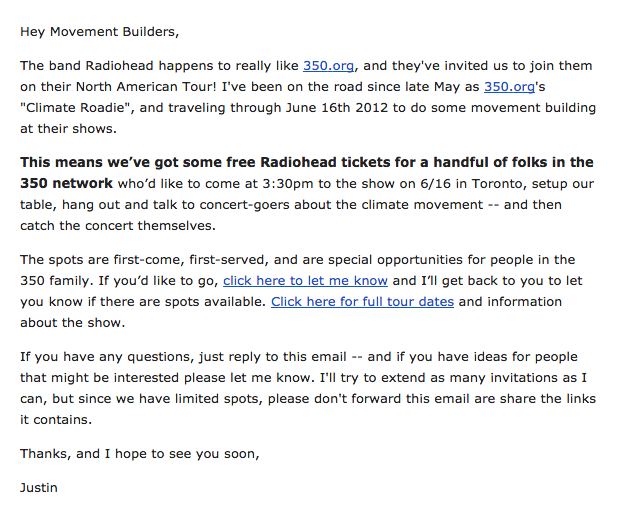 In June 2012, 350.org sent out an email to people in the Toronto area, inviting them to volunteer at a Radiohead concert to help the 350 "Climate Roadies" who were touring with the band. 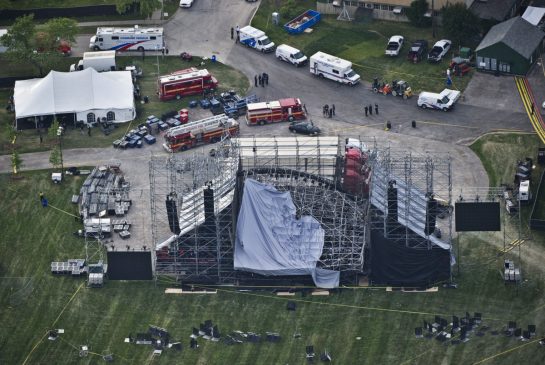 Two days later on June 16th, as the stage was getting set up, the volunteers arrived eager to help out and ready to see the show. However, the unfinished stage collapsed before the show, tragically killing Scott Johnson, a 33-year-old drum technician. (Photo Credit TARA WALTON / TORONTO STAR FILE PHOTO)

The show was obviously cancelled and, unable to discuss climate change with concertgoers, the volunteers were preparing to leave. Just before they dispersed the 350 roadies made the suggestion that they set up a local 350 group, handing them some t-shirts and clipboards to get them started. They set a date to meet, and Toronto350 was born. 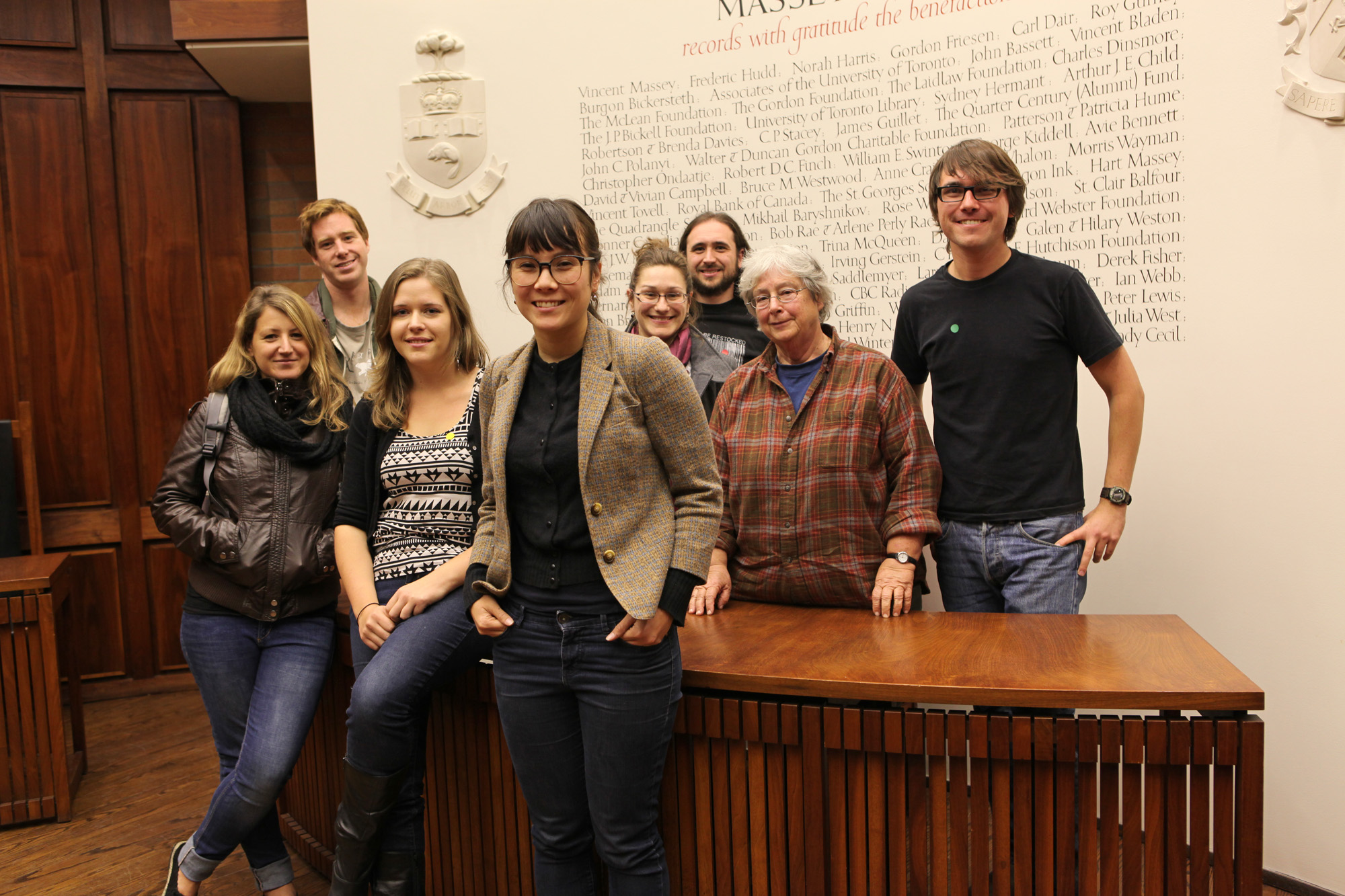 The group started small. Our first event was a petition drive on Queen St. on the anniversary of the Kalamazoo oil spill, followed by a movie screening. Over the next few months we established ourselves as a University of Toronto club and decided on our first two campaigns: demanding that U of T divest from fossil fuels, and working to stop tar sands pipelines, starting with Enbridge's "Line9". We ran a few more movie screenings, petition drives and creative actions, and several of the group went down to Washington D.C. for the "Forward on Climate" rally in February 2013.

In the fall of 2013 we hosted our first big event: a screening of the "Do The Math" divestment movie with almost 1,000 attendees. This event opened many doors, and showed us that we could do big things: all it took was dedication and organizing.

Another turning point came in June 2014 when we hosted a candidates' debate in the Trinity-Spadina by-election. This debate had the effect of significantly raising the profile of climate change and pipelines in that election. We discovered that we could wield political power.

In the fall of 2014 we organized a trip for 275 people in 5 coaches to travel to New York City and participate in the People's Climate March. This incredible event generated a massive spurt of energy, pushing the group to expand rapidly. We took on another three campaigns, several of which started to hold their own weekly planning meetings. By the start of 2015, we were seeing as many as 50 people meeting weekly to work together on climate issues, with many more volunteers involved helping us along the way.

In the summer of 2015, Toronto350 helped organize a march called Jobs, Justice & the Climate. In September and October of that same year, we participated in federal election protests around the issue of addressing climate change.

The following year, we helped push for climate consultation in Toronto’s federal ridings and worked to put forward a people's plan. In 2017, we helped Indigenous people from the Chippewas Of The Thames fundraise for their legal battle against Enbridge's Line 9 Pipeline. We also took the lead in organizing a People's Climate march in April.

In 2018, we helped increase awareness about the Trans Mountain Pipeline in Toronto. We held a Climate, Jobs and Justice rally on September 8th, coinciding with events held around the world. In the fall of that year, in solidarity with Extinction Rebellion, we staged a die-in foregrounding climate change as an emergency. We also brought the urgency of the IPCC 1.5°C Report to MPs in the Toronto area.

In 2019, 2020 and 2021, we've continued with initiatives on and off line that centred around climate justice and creating a fossil free future. See a few examples below, in this year in review blog and the 2021 recap video!

Toronto350 strives to actively help Indigenous people by listening to what they share with us, donating to their causes and organizing with them. Another continued focus for Toronto350 is raising awareness about the need to stop oil pipelines through public outreach and visits to politicians’ offices. Lastly, we have been involved in a number of divestment campaigns like those for the University of Toronto and The Ontario Teacher's Pension Plan.

The rest is an unwritten story. Join us, and become a part of writing it...