Why 2015 is the Vatican's Pope Pius XII Moment

I don't have any New Years Resolutions this year beyond being friends with the same wonderful people in my life now. But I have a New Years hope.
I hope that this time next year, the Vatican will have committed to divest from fossil fuels.

You claim to represent a person who died for the sins of our species. You've set yourselves a high standard.

We don't always see eye to eye on things from things like gender to protecting vulnerable persons from STIs. But we both respect biblical teachings about life on earth.

From the book of Leviticus saying:

The land is mine and you are but aliens and my tenants. Throughout the country that you hold as a possession, you must provide for the redemption of the land (25:23-24.).

to your own Catechism saying:

We really can name God, starting from the manifold perfections of his creatures, which are likenesses of the infinitely perfect God, even if our limited language cannot exhaust the mystery. (no. 48)

Our language might not be able to exhaust the mystery, but our exhaust fumes will if we don't – to use your Bishops own words – :”end the fossil fuel era” as fast as humanly possible.

My Dad and I had a great conversation yesterday. We were talking about why Pope Pius XII does not deserve Sainthood for giving in to politics over intrinsic human dignity during Holocaust.

Which my Dad put well, “the voice of the Church was not the prophetic voice”. A voice that is willing to be unpopular, ostracized, and stand in the way of evil. A voice that acts on what is right because it trusts in the benevolence of God.

With the sixth great extinction in our planet's history beginning—meaning we will exterminate 50+% of species alive on earth now—the fossil fuel industry is directly responsible for what can be fairly described as an ecological Holocaust of God's creation.

And that's why I hope you divest from fossil fuels in 2015.

As research has pointed out, 90 companies on the planet are responsible for 63% of human greenhouse gas emissions. Cameron Fenton put it bluntly speaking at my University this year: “We have enemies. And they have names”.

Life has enemies. And you're investing in them.

So where will you stand this year Pope Francis? You chose the name of a Saint most closely associated with caring for creation. Will your teachings translate into your portfolio in 2015?

You will be remembered by what you did. And your ability to use the prophetic voice is desperately needed by creation now. 2015 will be your Pope Pius XII moment. ‪#‎DivestTheVatican‬ 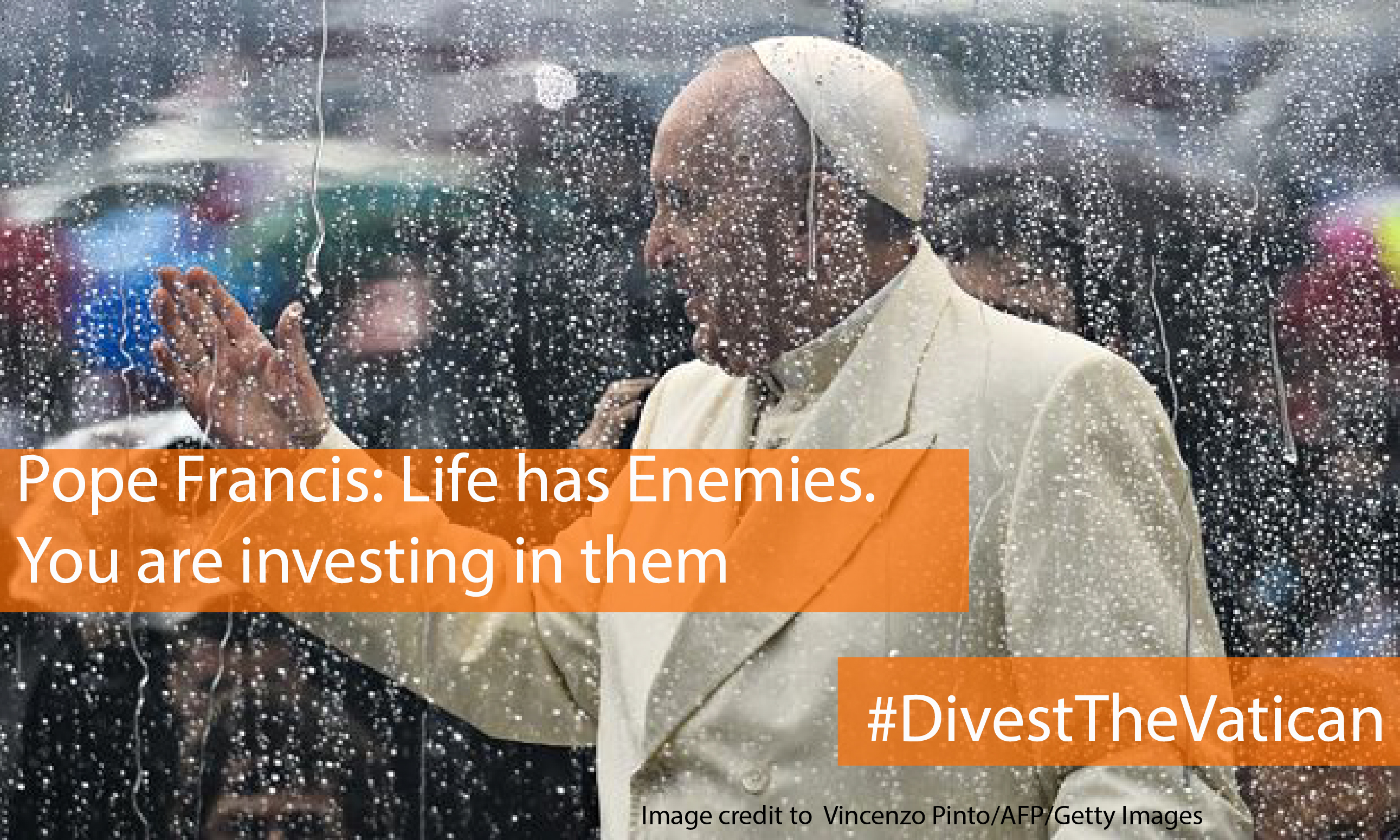 Note - this is a blog post by Ben DW, Toronto350.org's Operations Director. The opinions expressed here are my own and not necessarily those of Toronto350.org