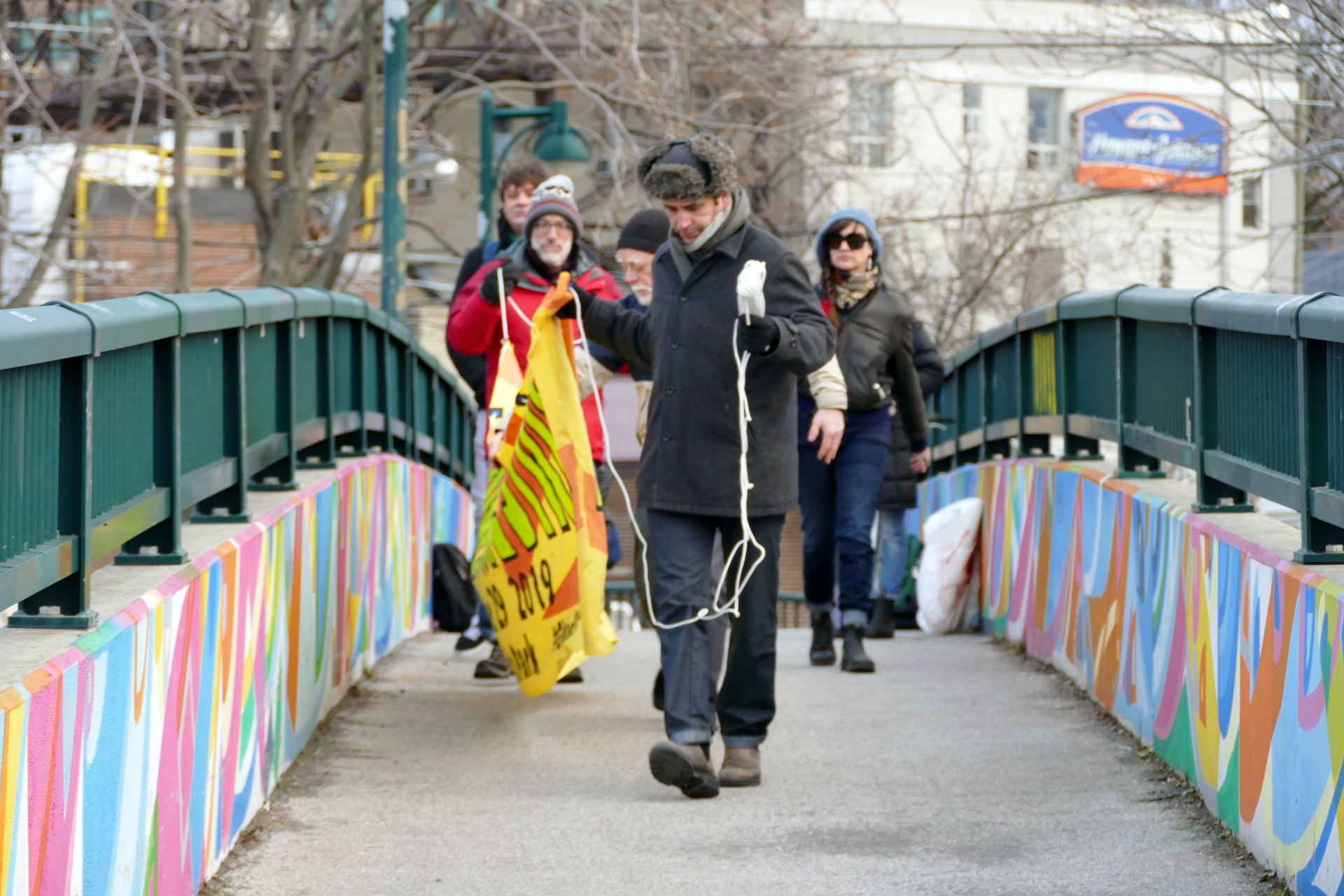 And some comments from TO350 members....

“A few months ago, I'd never heard the term banner drop. Now I've been at four of them. Of course I'd seen photos of banners draped over bridges and towers, but I hadn't thought about what it would be like to do a banner drop myself. It's been surprisingly social. Not just the great folks who were there to tie up the ropes and wave at the traffic, but also the connection with the drivers below and the walkers, runners and bikers on the bridge. Lots of waves and honks of support, many from big trucks and even GO train drivers! It really underlines the breadth of support for climate action. Really a great experience.” - Dave 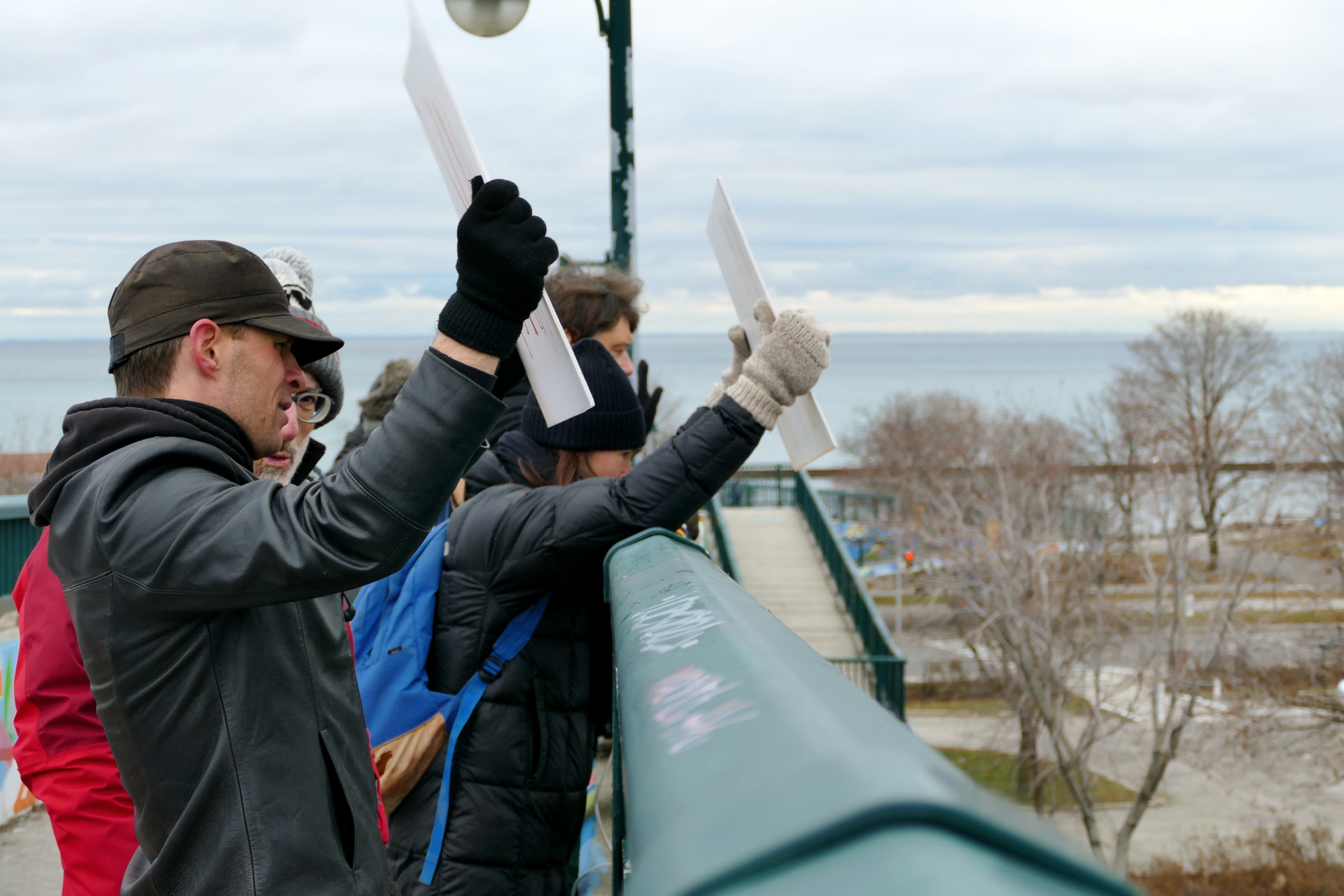 “The banner drop on the 28th was very encouraging - the drivers were receptive and excited about our message. In total there were 3 hecklers from over an hour’s worth of commuters passing by. That’s a clear majority that wants to see action on climate change!” - Emily 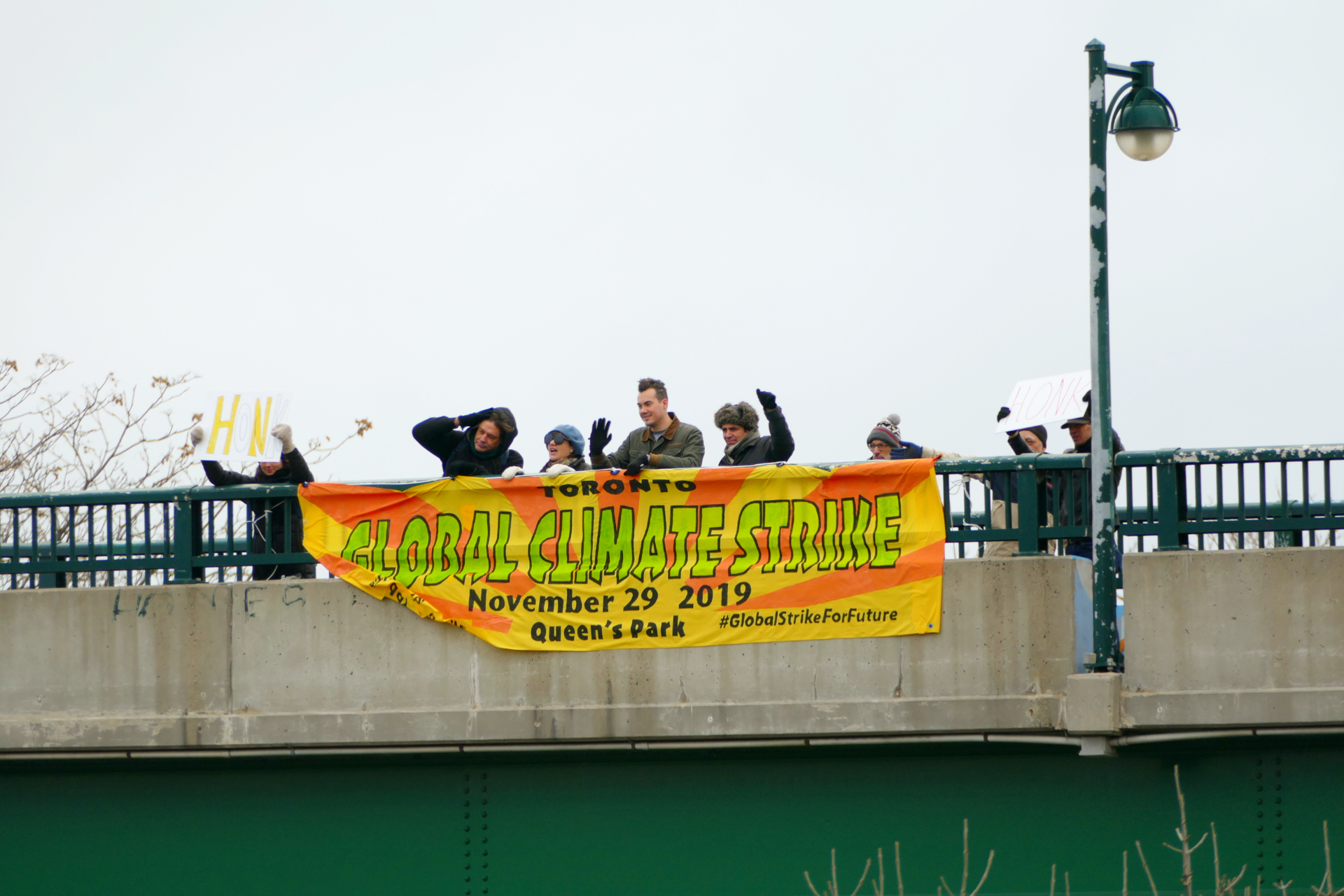 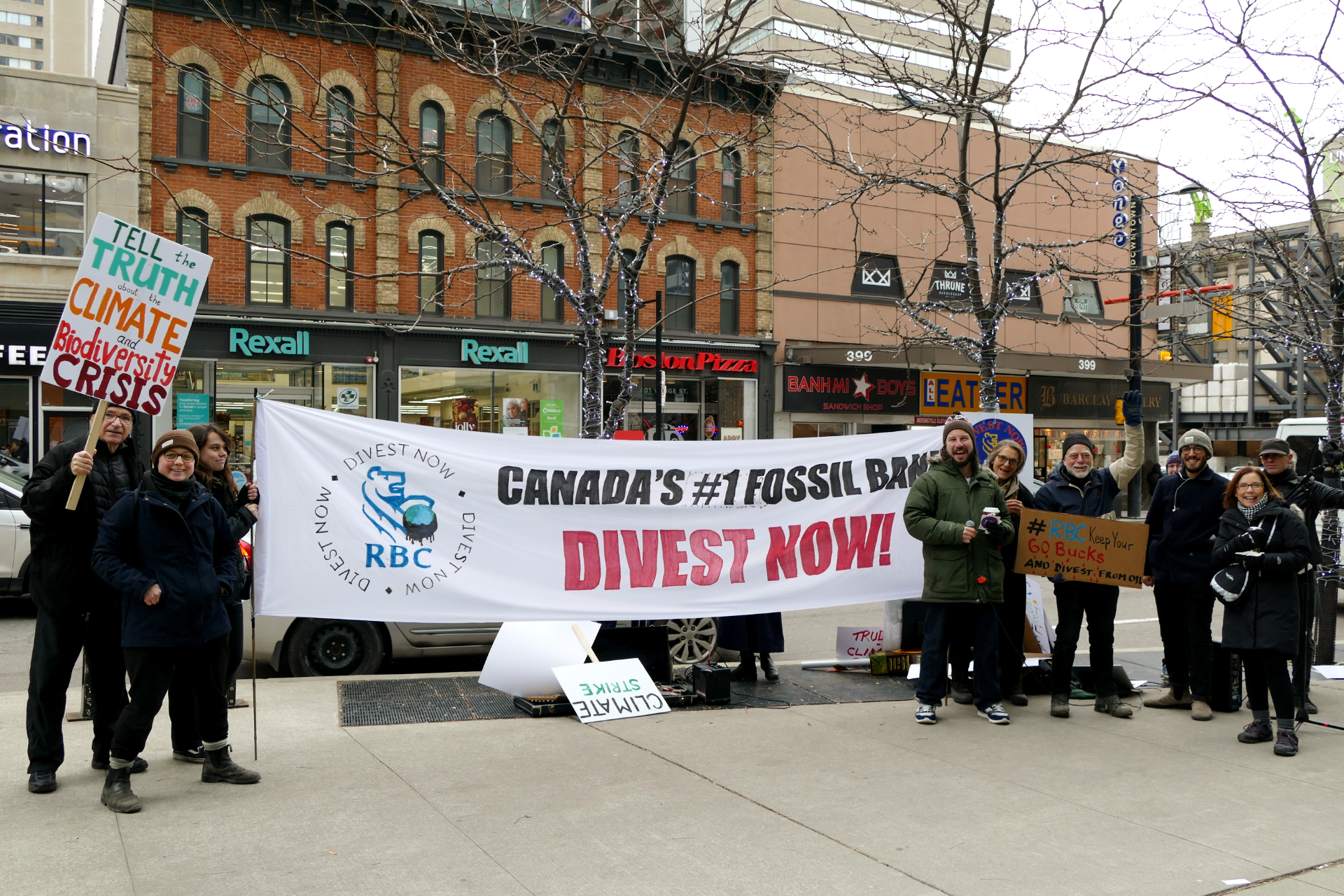 RBC is the #1 worst Canadian bank for funding fossil fuels around the world since 2016 and #5 in the world! They fund fracking, tar sands and oil pipelines. One of the projects they fund is Enbridge’s Line 3 oil pipeline, which ignores Indigenous rights and threatens the Great Lakes, wetlands, rivers and watersheds.

They are currently trying to woo young people with a $60 offer for opening a bank account. Protestors carried "Divest RBC" placards. Some people took photos with the logo calling on RBC to Divest with the sign saying “KEEP YOUR $60”! #RBCKeepYour60Bucks and #DivestRBC. You can still do this if you want to extend the reach of the campaign. Learn more: http://tinyurl.com/fossilbanks

“Joining the DivestRBC protest on November 29th made me realize how few people actually know about the cruel investments of the world's largest fossil banks. Being part of that protest and informing people about RBC's role as Canada's largest investor in fossil fuel production made me feel truly empowered. I believe it's incredibly important to continue explaining to the public what this plain term "divestment" really embodies.” - Jana 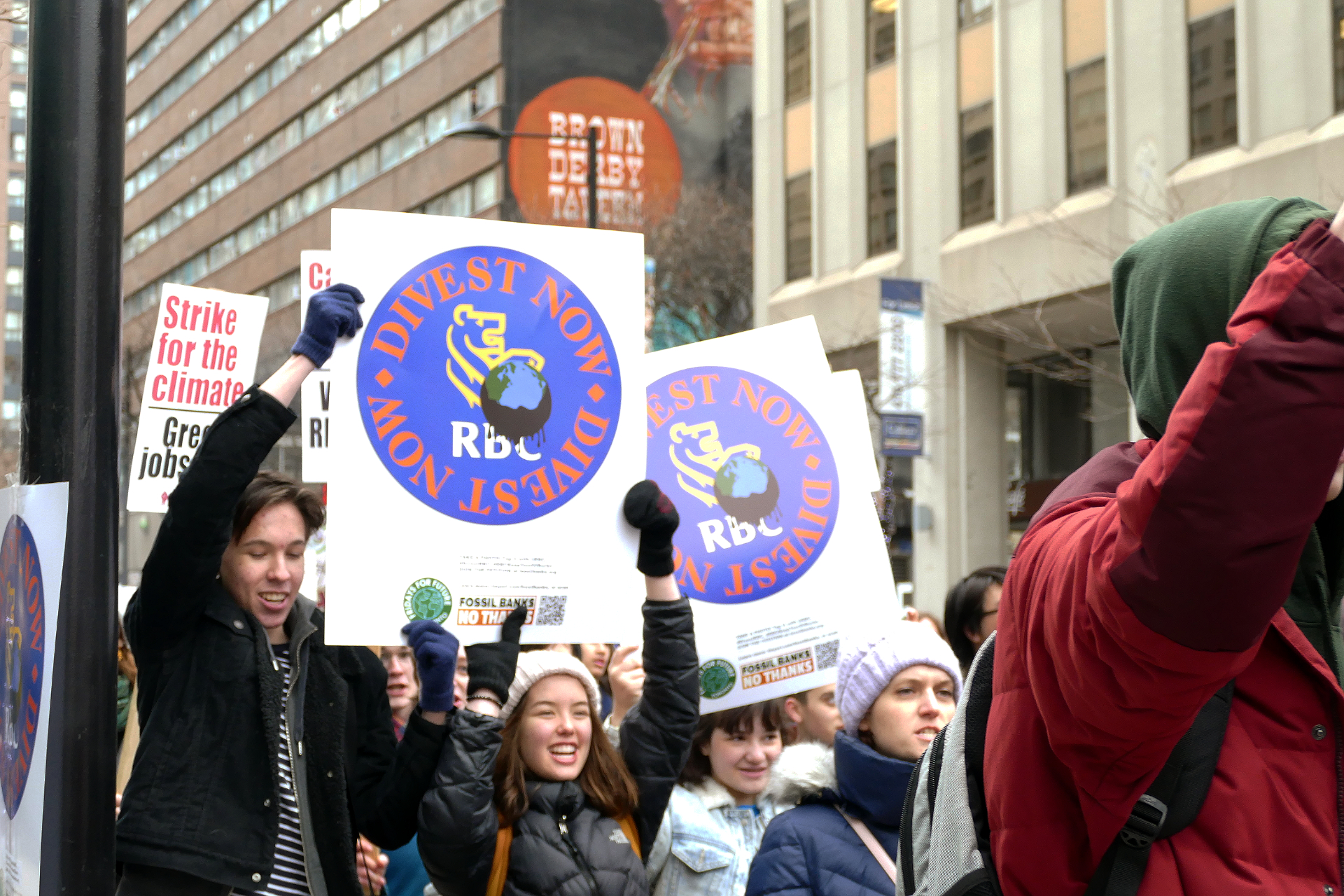 This was the first global strike led by the youth Climate Strikers after the record-breaking September 27th one with 50,000+ attendees. More than 5,000 people braved the cold this time, reinforcing demands for climate justice and government action that means we’ll keep the world from heating uncontrollably. It took place the Friday before COP25 where countries are meeting about the implementation of the Paris Agreement.

And comments from TO350 members...

“What touched me most about the Climate Strike was the awareness and drive of the youth who were involved. The organizing team included an impressive group of young activists. They gave speeches and interviews, created artwork, handled social media and did outreach to a widening ring of people connected by the climate crisis.

At Queen's Park itself, my youngest volunteer joined me long before the rally started. We talked about the troubling cuts of the provincial government. He wore a light jacket and no gloves, but was more worried about helping! I gave him a yellow volunteer sash and later, was relieved when he accepted a blanket and sat with an older Fridays for Future member. I'm glad the Climate Strike provided a place for him to share concerns and take action.” - Colleen 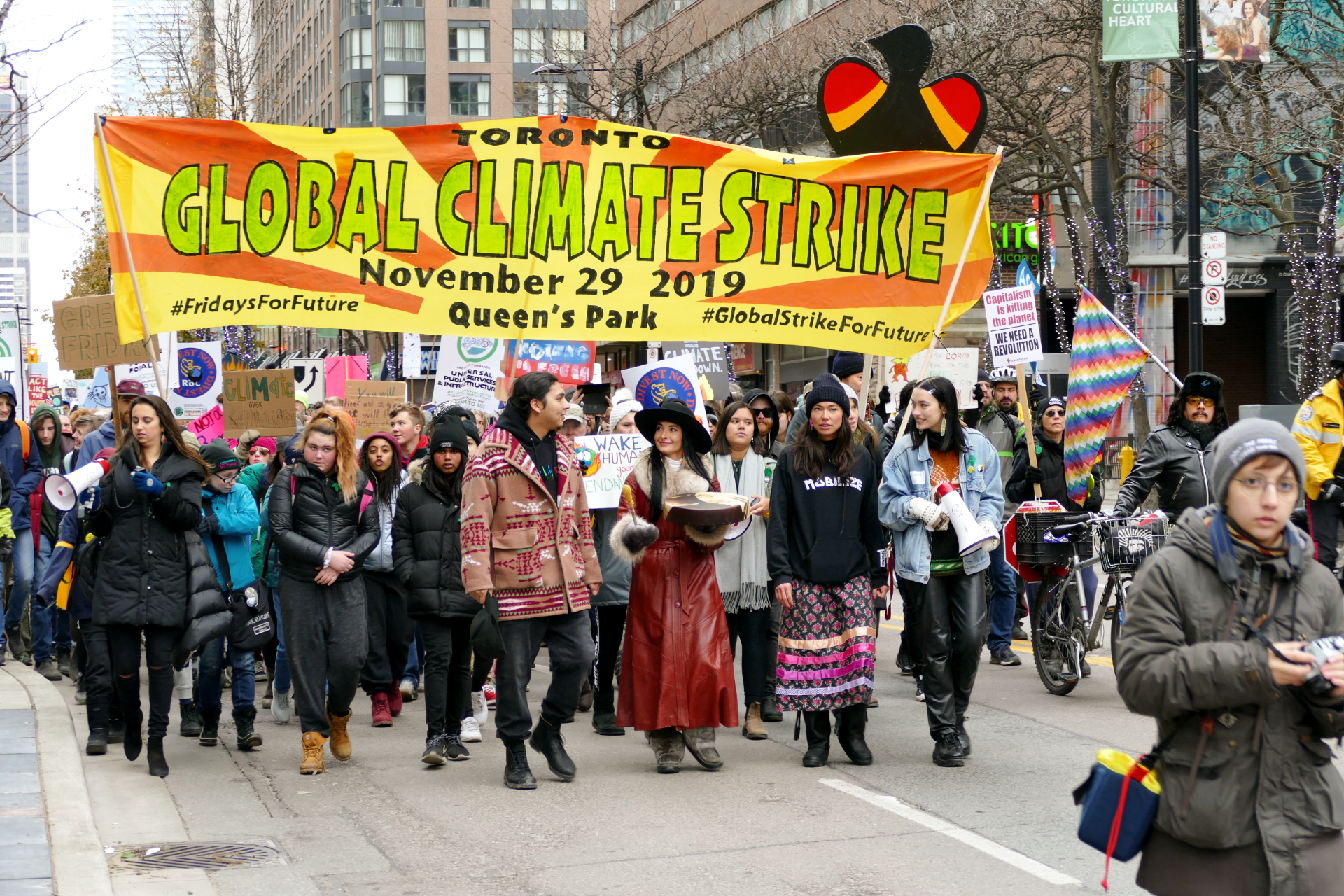 “A few minutes after I arrived, a woman came up and asked if her daughter could interview me. I said yes, and the young student from Davisville pulled out her carefully handwritten questions. She struggled a little with her oversized leather gloves, but overcame the challenge, holding a small tape recorder and microphone with her mother’s assistance. Her questions addressed the climate emergency and my relationship with it personally. I was delighted to be able to contribute to her school project, and was so impressed with her confidence and focus!” - Adrienne

"My most positive experience of the Nov 29 climate march were the speeches. We heard the best of Canada:  Indigenous women, a female autoworker from Oshawa promoting a just and sustainable transition and energized youth.” - Alan 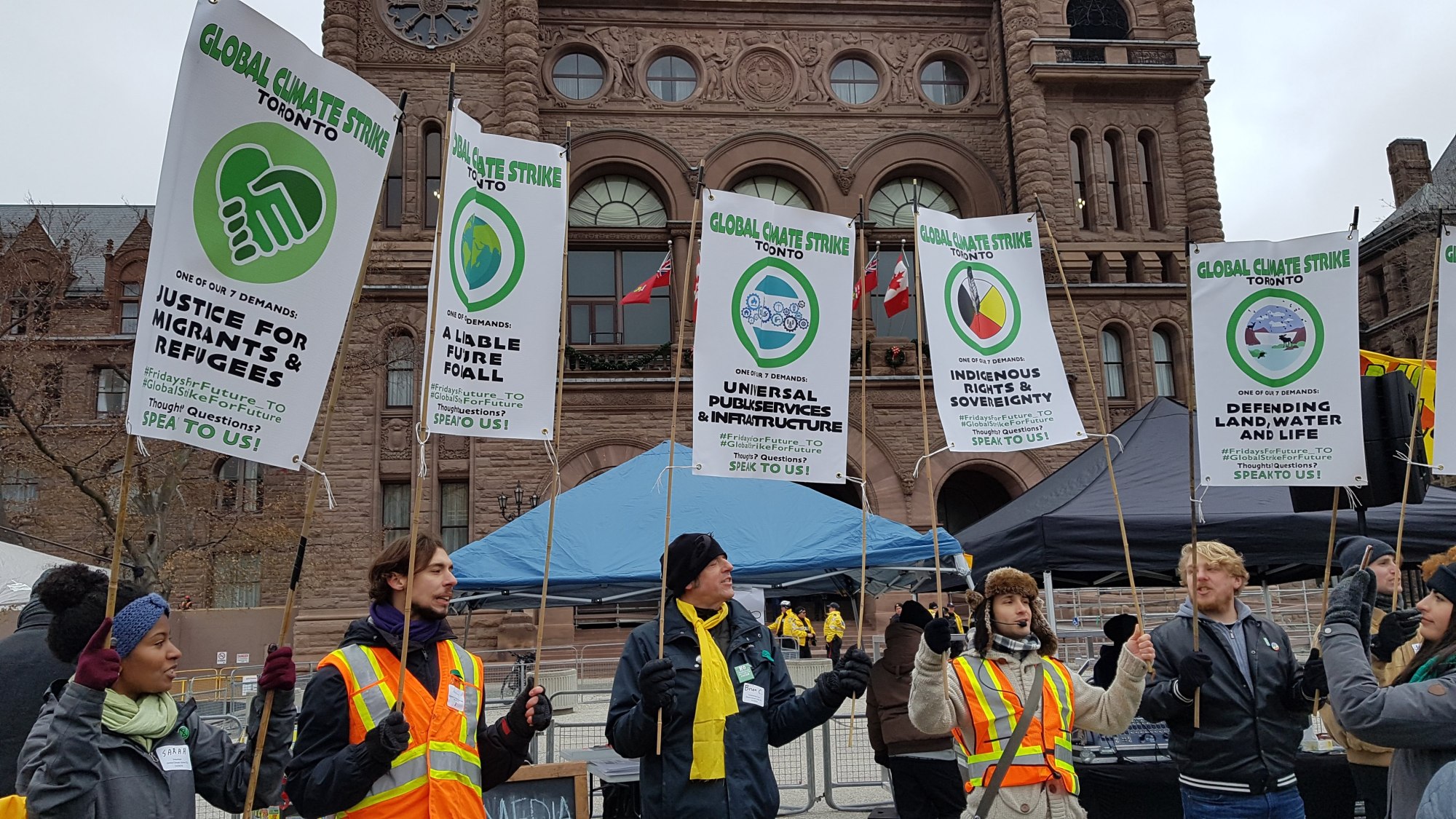 “My favourite thing about the latest march and rally was how positive the atmosphere was. I dare say the organizers, and the attendants were having FUN! The sing- alongs - especially the song with the optional curse word - were enjoyable. The speakers were confident, motivating and a good cross-section of actors in the movement.

I also enjoyed the visual recognition that some of the groups employed i.e. the climate vegan's animal horns, the divest RBC posters, OPSEU waving their flags, etc. This shows the diversity of groups that are coming together for a common cause.” - Dorothy 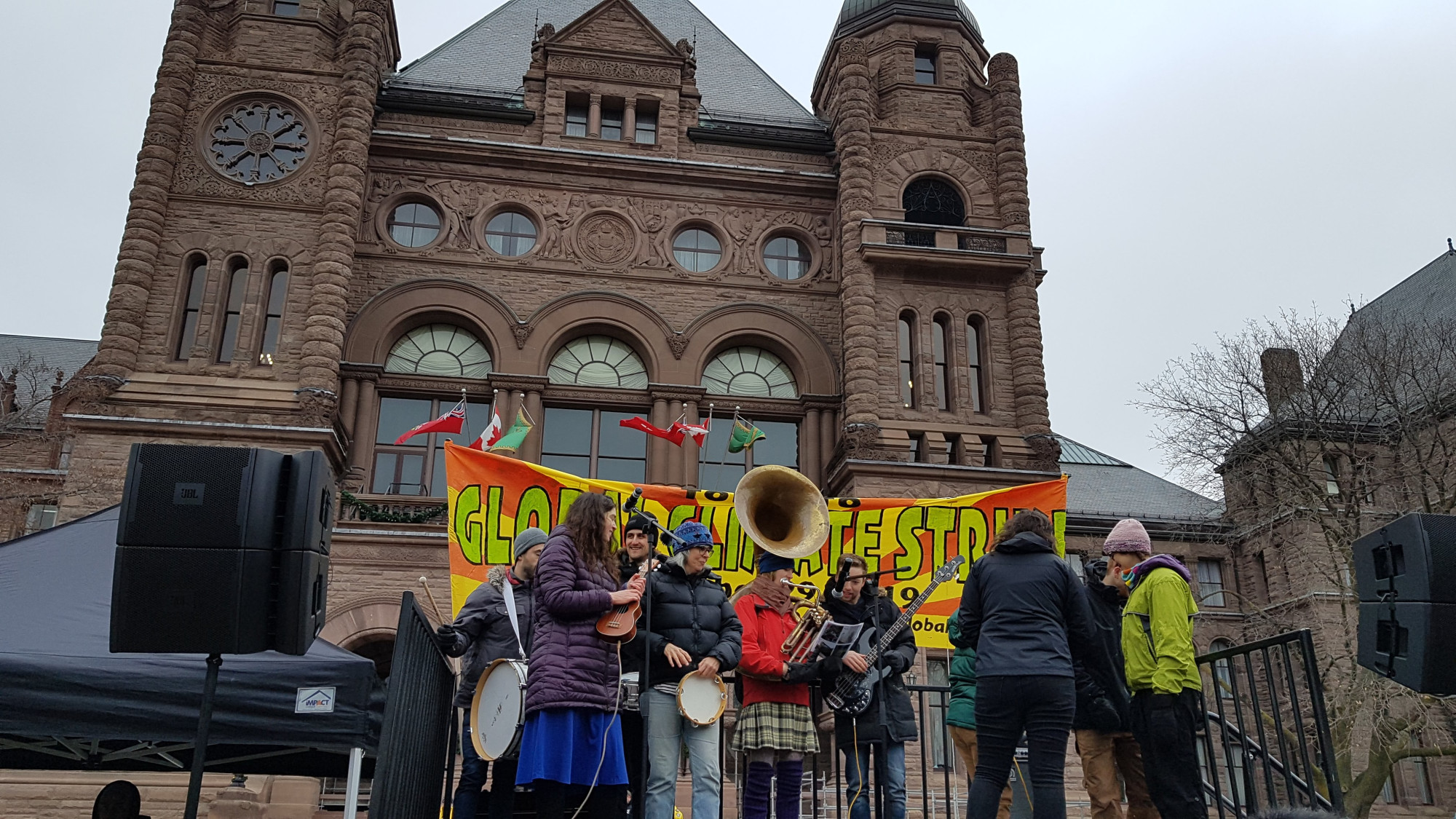