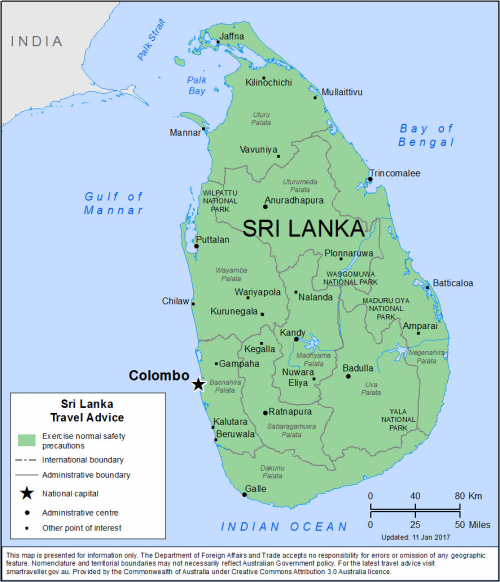 The effects of climate change are here. They are currently being experienced around the world. Some places are already dealing with near-constant disaster, and others are doing their best to prevent the worst consequences. Here, Hary, a current Toronto350 member, informs us about his home country: Sri Lanka.

Sri Lanka is an island in the Indian Ocean, located to the south of the Indian subcontinent. Sprawling over the area of 65,610 square km, the island has a maximum length of 437 km (Devundara to Point Peduru) and maximum breadth of 225 km (Colombo to Sangamankanda). There are 25 districts organized into nine provinces. Sri Lanka, with its teardrop shape, is dominated by its astonishingly varied features of topography, making it one of the most scenic places in the world.

The differences in elevation divide the island into three zones: the central highland, the plains, and the coastal belt.

A coastal belt consisting of scenic sandy beaches and lagoons surrounds the island. The best beaches line the southern, southwestern and eastern coasts. In the northeast and the southwest, the coasts cut across the stratification of crystalline rocks, cliffs, bays, and offshore islands, creating one of the world’s best natural harbours at Trincomalee on the northeastern coast and a smaller rock harbour at Galle on the southwestern coast. In the northwest, Mannar Island, which is joined with the mainland by a bridge, is almost connected to southern India by a long chain of sandbanks and islets called Adam’s Bridge.

Rivers in Sri Lanka originate in the central highlands near Adam’s Peak and flow through the gorges, broad valley and plains, finally emptying into the sea near Trincomalee and creating the different landscapes of escarpments, waterfalls and deep gorges. Most of the rivers are short and frequently interrupted by the discontinuities of terrain. The longest river in Sri Lanka is the Mahaweli Ganga (Mahaweli River), with its length of 335 km. The upper reach of the river is wild and unnavigable, while the lower reaches are prone to seasonal flooding. The river supplies the most important water necessary for the irrigation system in the northeast region, in which natural rainfalls are deficient.

The average yearly temperature in Sri Lanka as a whole ranges from 28ºC to 32ºC. The mean temperature varies from a chilly low of 16ºC in Nuwara Eliya in the central highlands, where even frost might occur for several days in the winter, to a high of 32ºC in Trincomalee. The coastal areas are cooled by sea breezes.

Lying in the equatorial and tropical zone, Sri Lanka is influenced by monsoons, allowing four distinct seasons. The differences of elevation also influence temperature variation: it is always hot in the lowlands and it gets cooler when reaching the higher altitudes. Bright, sunny, warm days are the rule and are common even during the height of the monsoons. The northeast monsoon brings rain in the northern and eastern regions in December and January while the western, southern and central regions of the island get rain from May to July due to the southwest monsoon. Sri Lanka has a high probability of landslides when daily rainfall exceeds 200 mm in landslide-prone areas (nine districts).

The country has plans to move towards a green economy according to Ajith Silva, former director of policy and planning at the Ministry of Environment and Natural Resources. There was a climate change conference and exhibition called A Blue-Green Era that was held on 19-20 October, 2018. I didn’t see any coverage of the conference and exhibition in the English news media, although there was plenty of media coverage in Sri Lanka.

The “blue” in A Blue-Green Era refers to the oceans. The “blue economy” refers to the oceans and marine ecosystems and how to sustainably unlock the value in them. An exclusive economic zone (EEZ) is a concept adopted at the third United Nations Conference on the Law of the Sea (1982), whereby a coastal state assumes jurisdiction over the exploration and exploitation of marine resources in its adjacent section of the continental shelf, taken to be a band extending 200 miles from the shore.

The “green” in A Blue-Green Era refers to the green economy. The goals in the green economy are to create clean industries engaged in low-carbon emission production; create watershed restorative, health-preserving organic agriculture for food security; champion renewable energy generation, low loss transmission and an energy storage utility sector; create a green Leadership in Energy and Environmental Design (LEED) standard in the construction industry; create an alternative energy public and private transportation sector; create green cities and villages that are healthy and safe to live in; and prepare for a blue-green economy workforce through initiatives such as training students.

In 2017, the Public Utilities Commission of Sri Lanka approved the Least Cost Long Term Generation Expansion Plan with the aim of ensuring energy security. As per this plan, 240 MW of major hydro, 215 MW of mini hydro, 1,380 MW of solar, 1,205 MW of wind power and 4,800 MW of liquefied natural gas (LNG) will be added to the installed capacity between 2018 and 2037. However, continued differences of opinion between the Ceylon Electricity Board (CEB) and the regulator threatens the implementation of power projects.

Issues with the quality of power supply remain, with the frequent breakdown of a Chinese-built coal power plant, rising fuel costs, and droughts. The government is considering proposals for LNG import facilities and a new oil refinery. The current oil refinery is over 45 years old and needs urgent modernization in order to meet the demand in the petroleum sector. The government is also having discussions with India and Japan to build new LNG power plants.

In 2011, Sri Lanka emitted 45 million metric tons of carbon dioxide equivalent (MtCO2e). The energy sector was the largest emitter, accounting for 40% of emissions. The waste sector contributed 28% of emissions, followed by land-use change and forestry at 15%, agriculture at 14% and industrial processes at 3%. Sri Lanka’s greenhouse gas (GHG) emissions grew by 43% from 1990 to 2011, with gross domestic product (GDP) growing by 198%in the same time period.

With the carbon intensity of Sri Lanka’s economy at approximately 1.5 times the world average, there is potential to reduce Sri Lanka’s GHG emissions relative to GDP. Through its Intended Nationally Determined Contribution (INDC), Sri Lanka intends to reduce GHG emissions unconditionally by 7% by 2030 compared to a business-as-usual scenario, and a conditional reduction of 23% that would increase reductions from energy to 16% and 7% from other sectors.

I think Sri Lanka could switch to hybrid buses for its public transportation fleet and switch to renewable energy sources for it energy production. I believe the only thing stopping Sri Lanka from converting to a renewable energy future is a lack of political will, just like in Canada and elsewhere in most countries.