Toronto’s Rise for Climate, Jobs and Justice rally, on Saturday 8th, is coming up fast! 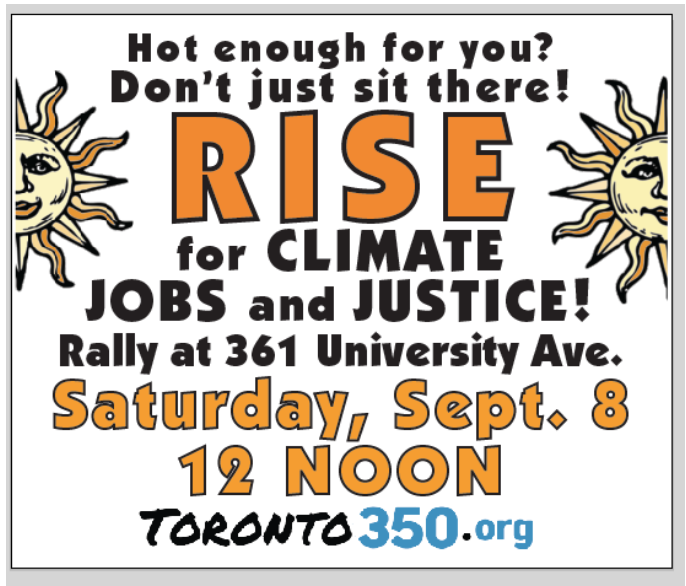 On the map, at riseforclimate.org hundreds of events are filling up the continents! From the Californian coast to Papua New Guinea, from South Africa to Iceland, thousands of people are rising up to tell their local leaders they want a swift and fair transition to a fossil free world. The events include concerts, aerial photographs, sit-ins, screenings, forums and lemonade stands. They take place at community centres, libraries and public squares. This is creative, grassroots action, for the people by the people!


Another big event to celebrate, is the Federal Court of Appeals ruling that the Trans Mountain Expansion Pipeline (TMX) approval was flawed on the grounds of inadequate consultation with Indigenous Nations, including the Tsleil-Waututh Nation. It is also a win for the endangered Orcas, as the court found further assessment of tanker traffic impact is needed.
We will celebrate this news at the rally and honour the First Nations who are protecting our air and water. We will continue to insist that the federal government abandon TMX and support a swift and just transition to green energy instead.
Toronto350 is excited to be part of this action. We have a rousing selection of music and chants in mind. The event will touch on just worker transitions, economics and climate science. It is also just the beginning! Toronto350 will have suggested follow-up actions. Post-rally actions, like contacting our elected representatives, writing letters to the editor and signing potentially influential petitions, can help us continue the momentum.
Look forward to seeing you there!
When: 12-2 p.m.
Where: The rally will begin at 361 University Avenue (just south of Armoury Street). March to follow, up to Queen’s Park.
Do you like this post?
Tweet