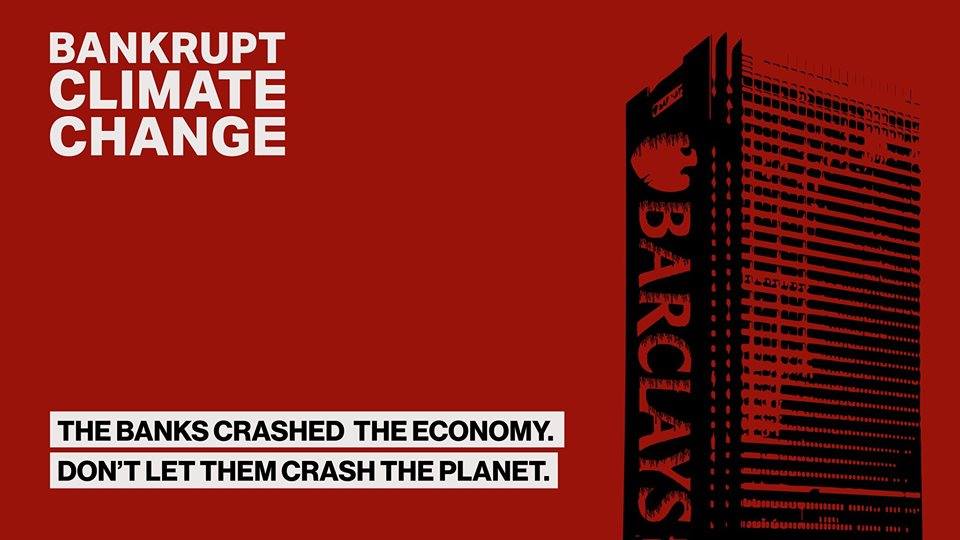 On Friday May 24, climate activists from Toronto350, Extinction Rebellion Toronto and Fridays For Future Toronto/GTA will join a global action targeting Barclays Bank, Europe’s largest financer of fossil fuel industries. A rally outside 333 Bay Street, which houses Barclays’ Toronto business office, will be joined by youth-led Fridays For Future, who will march down Bay Street towards Union Station. The Barclays Bank rally is one of 37 taking place Friday and Saturday, in the UK, Frankfurt, Madrid and Toronto, coordinated by Momentum UK. The Fridays For Future march is one of over 1,200 school strikes in 107 countries to be held on Friday, as part of a Global Strike for Climate (photo by Orville Cummings).

UK-based Barclays Bank has been identified as Europe’s leading financer of fossil fuels in a recent report, Banking on Climate Change – Fossil Fuel Finance Report Card 2019. Their total financing of the industry in the three years since the 2015 Paris Accord was over $85 billion (all figures US), the world’s sixth-highest. In 2018 alone, they provided over $24 billion. In the critical category of fossil fuel expansion, their three-year total was ninth in the world, at over $24 billion.

"Knowingly financing the expansion of high-emission fossil fuels in face of today's climate emergency - as Barclays is doing - is nothing short of criminal," said rally organizer Michael Polanyi. "We urge people concerned about the climate crisis to tell their banks to stop funding the destruction of our children's future."

On March 30, over 40 branches of Barclays Bank in the UK were picketed and occupied over Barclay’s involvement in fossil fuels, in a campaign supported by Momentum activists from the UK Opposition Labour Party and Shadow Chancellor John McDonnell.

On April 25, Barclays announced they were exiting the UK gas fracking industry, considered one of the most destructive forms of extraction.

But meanwhile, Barclays was the lead banker of a transaction in the Permian Basin in the US, arranging a $1.5 billion loan for the acquisition of Oryx Midstream Services by Stonepeak Infrastucture Partners, announced April 2. Oryx, which provides crude oil transportation services, intends to “aggressively grow our footprint in the Permian Basin.” When completed, Oryx’ capacity will exceed 900,000 barrels per day. The Permian Basin is the most significant site of fossil fuel expansion in the US, with projects employing both conventional extraction methods and fracking.

The May 24-25 global action against Barclays will involve participants in Germany, Spain, Canada and the UK, with organizers from Mauritius, Romania and Shanghai signed up to organize future actions.

Certain fossil fuel sources have particularly high environmental, social and climate impacts. Barclays’ financial involvement with these “extreme” fossil fuels in 2018 (in US dollars) was:

Toronto350, Extinction Rebellion Toronto and Fridays For Future Toronto/GTA reject Barclays’ business practices as a major contributor to the climate crisis, as established by the Intergovernmental Panel on Climate Change. We call on Barclays to:

Toronto350 is a local network affiliate of the international 350. 350 uses online campaigns, grassroots organizing, and mass public actions to oppose new coal, oil and gas projects, take money out of the companies that are heating up the planet, and build 100% clean energy solutions that work for all. 350's network extends to 188 countries.

Extinction Rebellion Toronto’s mission is to spark and sustain a spirit of creative rebellion, which will enable much needed changes in the political, economic and social landscape. They endeavour to mobilise and train organisers to skilfully open up space, so that communities can develop the tools they need to address deeply rooted problems. They work to transform  society into one that is compassionate, inclusive, sustainable, equitable and connected.

Fridays For Future Toronto/GTA facilitates youth action on climate change in the GTA in solidarity with Greta Thurnberg in Sweden and other youth climate activists.

Momentum is a people-powered, vibrant movement aiming to transform the UK Labour Party, communities and Britain in the interests of the many, not the few.