It is with horror and outrage that we watch the RCMP raids on Wet'suwet'en territory unfold in BC. These actions violate Indigenous, provincial and international laws and human rights. They make a mockery of the government's purported commitment to reconciliation. All in the name of industry and at the behest of government, to protect the interests of a fossil fuel pipeline! Shame. Deep and unpardonable shame. Keep reading to the end of this article for ways to act in solidarity and speak out.

To recap: On Thursday the 6th, before first light, the RCMP began their raid on Wet’suwet’en territory and made their first arrest at the #Wet’suwet’en monitoring post at 39km. They had guns and created a media exclusion zone. Six were arrested and later released. Some journalists were also threatened with arrest for photographing RCMP in tactical gear, but RCMP retracted that threat after an outcry from The Canadian Association of Journalists and others about freedom of the press. However, according to this ricochet article, they used other tactics to deter coverage.

Yesterday, Friday 7th, 55 vehicles headed to the Gidimt’en checkpoint. RCMP surrounded Gidimt'en checkpoint and kettled the camp, some of them tactical units with snipers and dogs. Media and legal observers couldn't get badge numbers or names and some RCMP wore masks. An Indigenous woman was refused when she requested a female officer make her arrest.

At 9:50am PST on Saturday the 8th, an RCMP and industry convoy of about 40 vehicles headed toward 27km, despite the fact that Wet’suwet’en Hereditary Chiefs had a scheduled meeting with RCMP. Unist’ot’en matriarchs and Indigenous supporters went into ceremony at 11:34am and refused to talk to police. By 4pm, there were 11 arrests at 27km in Gidimt’en territory.

Sunday 9th: "Unist'ot'en women hold a ceremony honouring their missing and murdered Indigenous sisters and inviting their spirits to stand with them against the same RCMP who denied them justice." RCMP reached the bridge to Unist'ot'en territory and an invasion is imminent.

Monday 10th: 7 arrested, including Unist’ot’en matriarchs. On-site media and legal observers rounded up and ID'ed. Police obscured their faces. Those arrested on 6, 7 and 8th freed and by about 9:20PST, others arrested on this day freed. RCMP continue surveillance.

Why Are Indigenous Rights Being Defined By An Energy Corporation? Shiri Pasternak, February 7, 2020

For ways to help see the following links:

Speaking out about this Indigenous rights violation is critical:

Let your MP and other Ministers know that you demand the RCMP stand down and that Indigenous law and Wet’suwet’en sovereign rights must be honoured and upheld.

See the list of the Wet'suwet'en Hereditary Chiefs demands at the end of this blog on the unist'ot'en camp website: http://unistoten.camp/wetsuweten-hereditary-chiefs-no-access-without-consent/

Express your disapproval & concern about the…

You could also register your demands and outrage with the RCMP commissioner:

Helicopter Company: And finally, the helicopter company that is flying in tactical teams now, has also refused to bring supplies and media into Wet’suwet’en territories. You can call them and demand that they stop supporting this violation of Indigenous rights: Silverking helicopters, 250-877-1989.

And a few articles detailing some actions that have taken place: 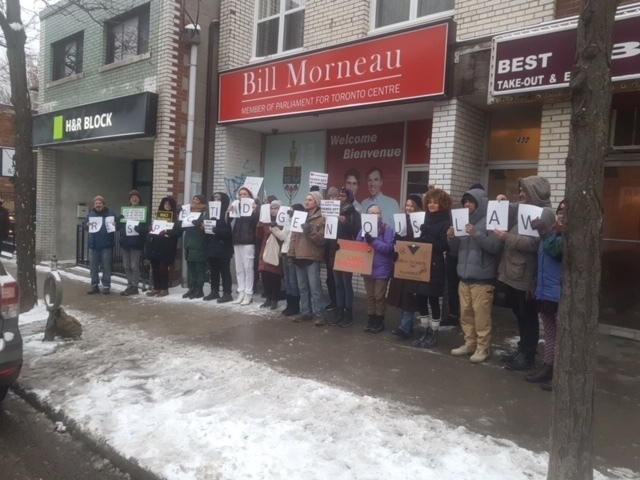 Note: today I was copied on a pro Teck Frontier Email from a group that called on their membership to reject potential government offers to help Alberta with money instead of another Indigenous rights-denying, climate-wrecking, Boreal forest clear-cutting, sunset-industry tar sands approval - the biggest one yet. They assured members that they have the numbers to force the approval, if they just called on all MPs and provided an easy to use letter portal.

It is ever clearer that we need to mobilize our numbers too, to demand our government stop endangering Indigenous people by defending extractive capitalism at the expense of human lives. We must demand an immediate stop to the raids, arrests and violation of the Wet'suwet'en people and their sovereign territories.