From Genocide to Eco Genocide: Whose life Matters?

Why do I fight against climate change?

Turtle Island (a.k.a. North America) is a place of continued Genocide. When I look at ‘history’ I see Genocide. When I look at the ‘present day’ I find environmental or Eco Genocide: killing off a group of people by destroying the lands, water, air, and food sources they rely on. I wonder if my children will learn an extremely watered down version of the history of Eco Genocide from the school system and then once they graduate post secondary education start to relearn it more graphically - as I did with the Genocide of Indigenous people on Turtle Island.

The Kairos Blanket Exercise is something I’ve done a few times and the last time I did was when I asked for the exercise to be done with Toronto350. What struck me the most was watching the family, with three kids, who came to participate in the exercise. During the exercise the narrators spoke of children being taken from their families and placed in residential schools where they were forced to speak English (or beaten), and if they did manage to find their families again, were not always able to integrate back (loss of language, culture etc). I wondered how this family of five was feeling. I read scroll 14, about mice running over their lunches, about children knowing that other kids had better schools with science labs and libraries - and knowing their school didn’t left them them believing that they don’t matter.

Whose life matters? Those in the northern hemisphere are contributing most to climate change but those in the south will be hit the hardest. I wonder if all world leaders valued BIPOC lives would they work to mitigate climate change? If they heard about the changing weather patterns affecting agriculture in India and actually cared about the livelihood of farmers there (who rely on steady rains) then would they move faster? If everyone believed that ‘all lives matter’ then they would believe that Black and Indigenous and POC lives matter. And as loudly as they shout “all lives matter” they would shout for world leaders to stop environmental racism, and shout about the severe weather patterns that are already affecting people all over the world because of anthropogenic climate change. And they would shout about the injustice of cops murdering Black people. If we fight for climate change because we care about human lives, then we should also support Black Lives Matter, because we care about human lives. Whose life matters?

This month I had the [settler] privilege of traveling/exploring the region of Aamjiwnaang, where some of my friends live. As privileged as I’ve been to travel a lot this summer, I’ve been mostly exploring lands whose story I do not know. What Nation lived here? Do they still? Was it small pox blankets intentionally given to wipe out a Nation? Or are they here still, but not well known because their culture was suppressed for so long? Are their issues ignored (forcing them to protest) because Canada wants to forget that history to be known as a peaceful nation? The whole summer everywhere I went I escaped that history but in Aamjiwnaang I couldn’t. Because siblings Vanessa and Beze organized a toxic tour for us. 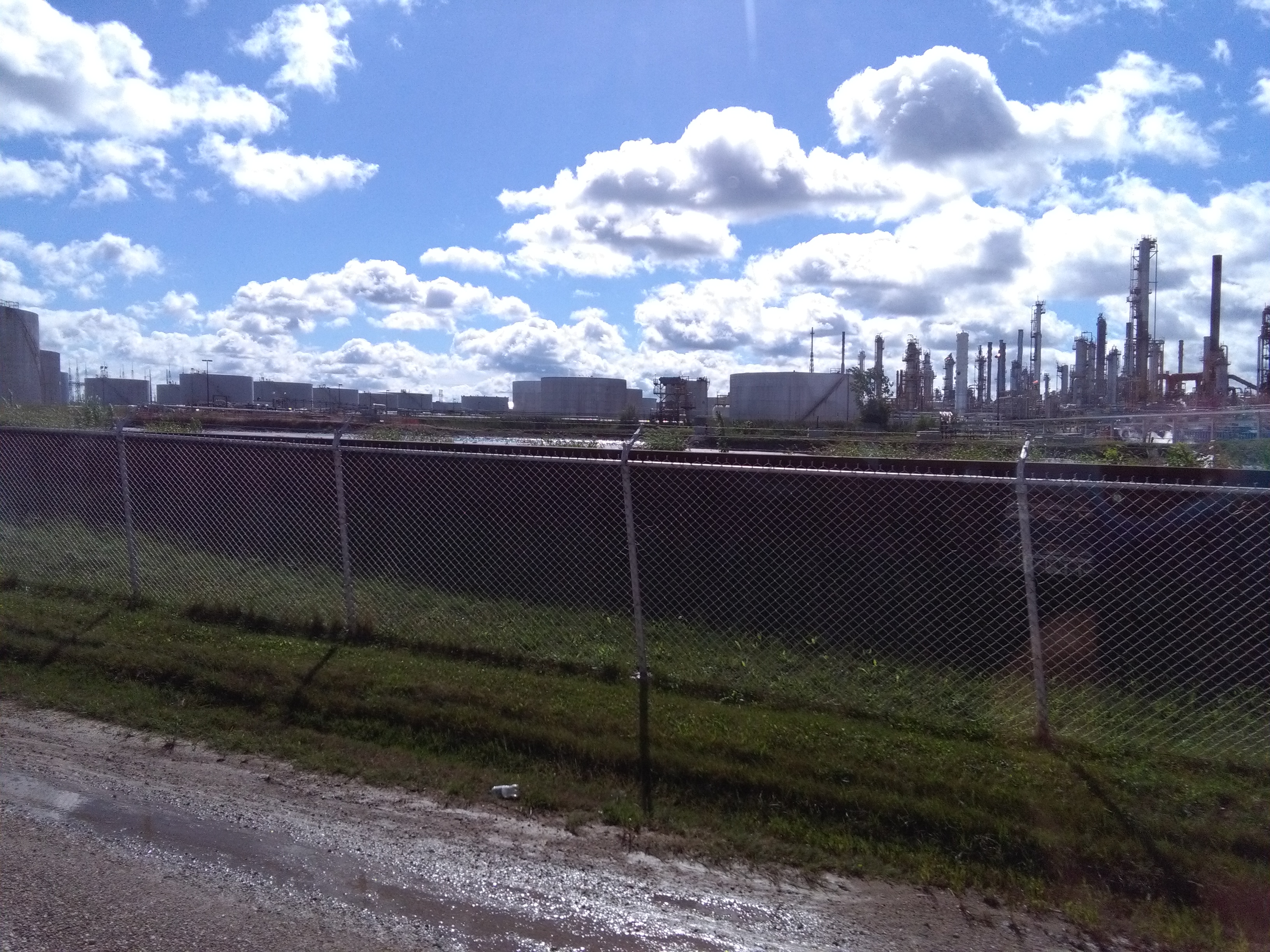 The Toxic Tour was a bus tour of the Chemical Valley - Canada’s petrochemical industry - surrounding the Aamjiwnaang reserve. Environmental racism is having POC (people of colour) lives threatened by surrounding their neighbourhoods with waste sites or chemical industries. The Kairos Blanket Exercise uses blankets to represent the land and as the narrators speak about the Genocide the blankets get folded smaller and smaller. People are asked to move to other blankets that represent reserves. People are given cards and then told that they just got diseases and must step off the blankets. This exercise showed how Turtle Island was once shared by many nations and how the land was stripped from Indigenous people until they were given tiny plots of land spread out across Turtle Island. Here’s a little plot of land called a reserve. Now we are going to surround you with chemical industries. Eco Genocide. In Aamjiwnaang, the ratio of female:male births is 2:1, the rate of miscarriages is high, the average life expectancy is 55 years old, the cancer rates are high, there are benzene spills, and when the alarm goes off people are told to travel in the opposite direction of the wind. Just drop what you’re doing and get out of there.

Why don’t you just leave for good? Vanessa says she doesn’t just leave because we have to dismantle it. We have to protect the animals, endangered species here - it’s not just about us [humans].

Through Genocide and Eco Genocide we see the same pattern of Indigenous Peoples deprived of the right to live in connection to the land, a huge part of their culture. Does “all lives matter” include the plant and animal life? Is water seen as sacred? Is being able to hunt and fish in sustainable ways affected by the poisons animals are exposed to - we force Indigenous people to buy from grocery stores by poisoning the animals they would have eaten. The plant medicines are no longer pure.

What would life be like if I believed “all [human and nonhuman] lives matter”? Will I in 20 years regret killing insects, like Europeans must regret killing Indigenous People? Whose life matters?

On the bus we drive by an area that smells horrible. Some people cover their mouths and noses. Vanessa tells us that to get to the hospital people must leave the reserve and drive by that building.

I notice the contrast of the bright red, blue and yellow plastic playground with the gray background of the refineries. I usually wish for children to be off their screens and in the playground, but not here.

“I used to live down the street from here”, said an elderly man. “When I was a child we used to go to the vending machines here (Welland Chemical), it was the closest thing around -  the workers were all in hazmat suits. We [children] weren’t. Welland Chemical didn’t know what to do with the waste - they used to dump waste just on the side of the road. We would take some of the chemical and mix it with water. Stick a frog in it and pull it out - it would just be a skeleton.”

“To your right is the reserve - where there’s bush just doing its thing. The reserves are the only green spaces around here”, says our Toxic Tour guide, Vanessa.

“I went to daycare just across the street from a refinery. Here, where the community center, church, band office and baseball field are now. There used to be benzene spills when I was in daycare and they’d shut the windows to protect us.” said Vanessa.

And I’m privileged enough to be able to drive off leaving the hum of the factories and toxic smells behind. My headache and slight nausea go away when I arrive in London. I feel better about breathing.

As privileged as I’ve been to explore without knowing the history, I am now off to learn about it. From the internet for now, and hopefully in the future have members of the Nation tell me about it - in a not watered down way. I’ve been grateful to listen to some first hand stories. People living on their lands telling me about the murder of their daughters and their time at residential schools. I’m grateful to those who have shared their stories so patiently and vulnerably with me.

So if you wonder why I spend so much time fighting climate change, (and the industries that contribute to it) it’s because I believe that we are forgetting that some lives aren’t valued, and I need to fight for those people.

Next time you see me, ask for a history lesson on the lands I’ve ‘explored’ this summer.