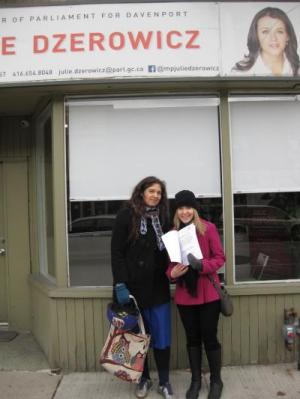 On Wednesday the 24th, members of Toronto350.org and other informed citizens dropped the UN’s new Intergovernmental Panel on Climate Change’s report off at their MPs offices, along with a pledge to propose, champion and support climate action in line with the urgency called for by climate science.
While some MPs not in central Toronto, like my MP in York South-Weston, likely didn’t receive many visitors, some MPs were visited by several groups during the day! Toronto350.org member, Cassie Norton, recounts her experience below.
I met Marja (a fellow Davenport resident) for the first time on Wednesday. She got involved with Toronto350 in roughly the same way I did, madly searching online for something she could do to affect change with respect to climate policy. She stumbled on both 350.org and Toronto350.org and was assigned the task of dropping off a copy of the IPCC report at her MPs Davenport office.
We met near the office and stood in the cold, discussing the fact that we both were not good at taking selfies. We eventually asked a bystander to take our picture for 350's social media.
The first person we approached responded, ”oh, are you delivering the IPCC report with 350.org?" even before we had a chance to ask him to take our picture. He went on to say "I'm glad you guys are doing this. I was planning on doing it myself, but hadn't gotten around to signing up". Of course he was happy to take our picture!
During our introductions we learned that our new friends name was Peter, he lived just up the street and he had been fighting climate injustice for 20 years (what he described as "his only hobby").
As soon as we walked into the office to deliver the report, the staffer there said "oh, you must be from 350". She walked to the front counter and opened a folder with a stack of at least 5 IPCC reports that had been delivered to the Davenport office earlier that day. She said that she would certainly pass on our message.
The number of reports already dropped off that day (by 1:45pm) by Davenport residents clearly showed the importance of the issue to its residents. We wrote our names down for a group meeting with our MP next month.
I like to think that it was not a coincidence that we met Peter on Wednesday, that just about anyone we chose to talk to would have been on the same page. The fact that at least five other people had bothered to print out and deliver the reports in Davenport alone, by early afternoon, supports this idea. It makes me think that if we made an effort to get off out phones and talk to our neighbours we might just have ourselves a revolution.
The irony of this statement is that the reason we talked to Peter in the first place was to get a picture for social media and the reason we were all dropping off the report was because of an international online campaign, so..... maybe a combination of big and small is our best bet, but we can't forget the small. I have a strong hunch that talking to our neighbours is key to affecting change. It feels great too.
Do you like this post?
Tweet