Toronto, ON—On Sunday, December 14th, an autonomous coalition of students, families, and environmental organizations brought a special delivery to the residence of Ontario Premier Kathleen Wynne. They delivered letters, written large cardboard cut-outs in the shape of sandals, which expressed their outrage that Premier Wynne has "flip-flopped" on her previous position that carbon emissions and climate change must be considered when approving the Energy East tar sands pipeline. 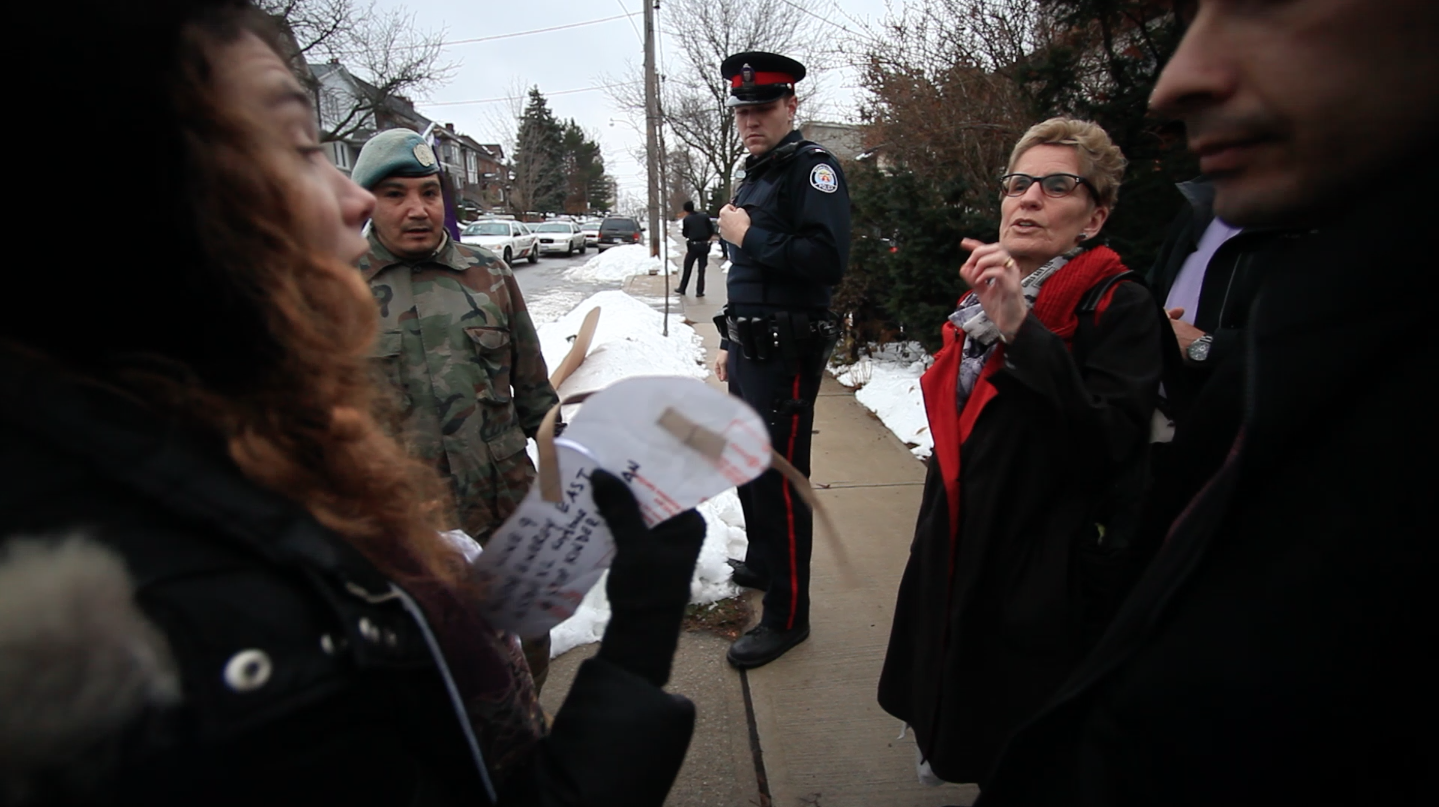 The flip-flop letters called on Wynne to reinstate a climate impact assessment on the proposed pipeline which, if approved, would allow the tar sands to drastically increase production, leading to a large rise in carbon emissions. The group met at North Toronto Collegiate, and indigenous drummers will lead them to the Premier’s house.

The UN is demanding that Canada do more on climate change. Wynne’s position on Energy East completely ignores that. Last week hundreds of Wynne’s constituents flooded the phone lines of her office demanding that she reconsider her statement “We are not talking about upstream emissions” when considering approval of Energy East. Wynne is ignoring the demands of her constituents and falling behind progressive leaders around the world.

"Climate change is effecting the countries least responsible for it first and foremost. It may seem a bit aggressive to show up at the Premier's home, but floods and storms linked to climate change are washing away the homes and lives of people in the Philippines and Bangladesh right now, so we feel it is an appropriate response" - Organizers

Along with the dozens of letters using hashtags #DearKathleen and #EnergyEast, the group staged a mock oil spill and a round dance on the street outside Wynne’s house with hazmat suits and gas masks.

Kathleen avoid directly addressing any concerns regarding emissions or climate change after walking away from university student Katie Krelove, who read aloud a letter she wrote to the Premier with a photo of her nephew attached "Dear Kathleen, I demand a full climate review of Energy East!"

The Premier was escorted by police to a black SUV while attempting to placate protesters demands, stating to journalists "I've been extremely clear that my position for the pipeline has been that all environmental protections need to be taken into account. We have set principals with Quebec"
The group argues the risks of Energy East are disproportionate to the rewards of the pipeline, which would carry 50% more oil than the Keystone XL pipeline and over a much larger stretch of land. Just a few of the risks include

·         Degradation of land, air, and water in Canada and abroad during the process of mining and refining

·         Inevitable bitumen spills on the land and the fresh water lakes and rivers along the pipeline route from Alberta to the East Coast. Tar sands bitumen is not only more toxic than conventional oil, but it also sinks in water, making it nearly impossible to clean up.

·         Spills from increased traffic of export tankers transporting the bitumen through delicate ecosystems such as the endangered beluga whale habitat in the St. Lawrence River.