A team of activists from Toronto350.org interrupted a public interview and book signing by Federal Liberal Leader Justin Trudeau at the Toronto Reference Library.  Demonstrators sought to communicate their concerns to the Liberal leader over his party's support for the Energy East pipeline project.

On October 30th, TransCanada filed their application with the National Energy Board for the Energy East Pipeline.  Energy East is a 4,600km long bitumen pipeline slated to run from Alberta to New Brunswick. If completed on schedule in fourth quarter 2017, it could move 1.1m barrels of oil per day to tidewater.

The Pembina Institute released a study in February 2014 which indicated that Energy East would cause 33,000,000t/yr of GHG pollution.  The report states that this is the rough equivalent to adding 7,000,000 cars to Canada's roads each year.  "Energy East is a climate disaster that would wipe out emissions reductions from other sectors." said Kevin Metcalf, a campaigner withToronto350.org, citing the Pembina report.

Trudeau's event at the reference library consisted of an interview with Catherine Clark about his own memoir "Common Ground".  The event and subsequent book signing took place at the Toronto Reference Library in the riding of Toronto-Centre.  A part of the riding north of Bloor will be merged with Trinity-Spadina, forming the new University-Rosedale riding for the 2015 Federal election.

Toronto-Centre MP Chrystia Freeland will seek election in the new University-Rosedale when it is created.  Activists were quick to point out that in Fall 2013 during the Toronto-Centre by-election, Freeland refused a Toronto350.org invitation to debate Green and NDP candidates on the climate issue.

Last week, during question period in the House, Freeland was caught on video rehearsing a speech.  "She was clearly unconcerned while NDP MP Murray Rankin addressed members regarding Conservative attacks on climate science." Metcalf elaborated in his written statement.  "Trudeau and his caucus have a lot of ground to cover if they're going to convince voters that their climate plank differs substantially from that of the Harper government."

Activists took the stage while Trudeau spoke, they displayed a banner which read "Energy East: Canada's Climate Test".  Other teams of activists suspended three banners in the library atrium as people departed from the venue.  Someone delivered a copy of the latest IPCC climate report to Trudeau as he signed copies of his memoir.  "I am deeply concerned about the future of the world for my three grandchildren" Owen Sound 350 activist Kim Allerton said to Trudeau.  "As we all should be." Trudeau replied candidly.

The National Energy Board is responsible for reviewing pipeline projects but the board currently omits climate impacts from their reviews. The board stated that it will consider a long list of factors, but environmental groups allege that impacts upstream (at source), downstream (at point of use) and climate implications of the project are being overlooked. 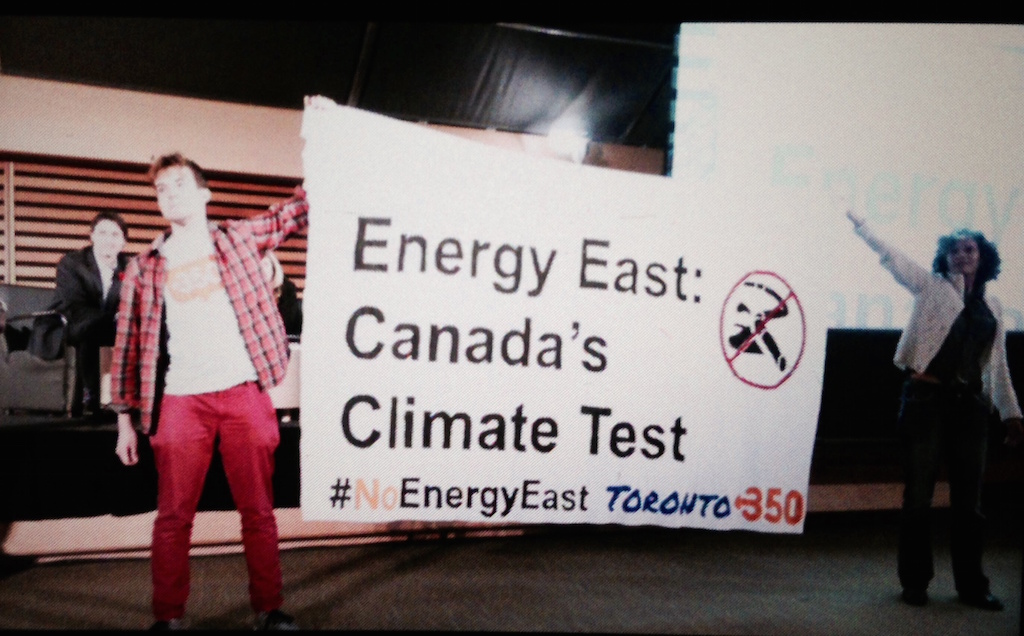