Barrie, ON – Thursday evening, a group of demonstrators confronted Justin Trudeau inside a high profile Liberal Party fundraiser at Horseshoe Valley Resort, north of Barrie, in Ontario, to demand that Justin Trudeau take climate seriously and demand that the Energy East pipeline get a full climate change review.

The demonstrators marched into the Resort and surrounded Trudeau in a tent full of Liberal Party supporters, where they asked him to sign a petition for climate impacts to be added to the National Energy Board assessment of the pipeline.

Trudeau affirmed his support of Energy East, and his concern that Canadian resources reach the market in a responsible, sustainable way. He also pointed to a consensus among the top three political party leaders: “Every political leader who’s gonna have the chance of being Prime Minister - that’s Mr. Mulcair, myself, and Mr. Harper - have all said that Energy East is something that we need to build.”

Katie Krelove, of 350.org, pressed the leader on whether the Energy East pipeline, which would facilitate the expansion of tars sands oil production, would stop Canada from meeting its Copenhagen energy targets – a challenge Mr. Trudeau skirted.

In the past, Justin Trudeau has expressed selective support of oil sands pipelines, including Keystone XL, but has also supported a national climate strategy – objectives that are mutually exclusive.

“Justin Trudeau needs to know that you can’t deal with climate change and build more tar sands pipelines, especially when those pipelines don’t get any sort of climate review,” says Cameron Fenton, Canadian Tar Sands Organizer with 350.org. “It’s not enough to say that you have a climate plan, politicians need to prove it.”

“If we don't act on climate change, nothing else matters. It's the single most important issue of our time,” says Adam Ballah, an organizer with Climate Action Now, in Barrie, which spearheaded the demonstration. “Justin Trudeau needs to recognize that oil sands expansion, facilitated by pipeline development, and climate action, are mutually incompatible goals.”

The Energy East pipeline is the largest tar sands pipeline ever proposed, and could carry over 1.1 million barrels of oil per day from the Alberta to New Brunswick, the vast majority for export. Energy East would facilitate the expansion of the tar sands, increasing Canada’s greenhouse gas emissions by approximately 32 million tonnes, a larger carbon footprint than all of Nova Scotia.

"Energy East is the latest desperate bid to do something every climate scientist in the world has warned against: pump the massive concentrations of carbon in Alberta's tar sands out into the atmosphere,” says Bill McKibben, author and founder of 350.org. “People along its route have plenty of local reasons to fight it, but they're also standing up for the future of the planet."

Organizers also pointed out that Energy East won’t receive any kind of climate review as the National Energy Board does not take climate change into consideration when they review proposed pipelines, nor is there any other regulating body in Canada that would.

“At a bare minimum, Trudeau and other politicians need to be calling for a full, fair and scientific review of this pipeline, one that takes climate change and other risks to communities and the climate into account,” Krelove explained.

Yesterday’s demonstration follows on the heals of a 350.org climate action, less than a month ago, when protesters challenged Trudeau with tough questions on Energy East at a fundraising stop in Chester, Nova Scotia. Demonstrators are looking for a leader on climate action. 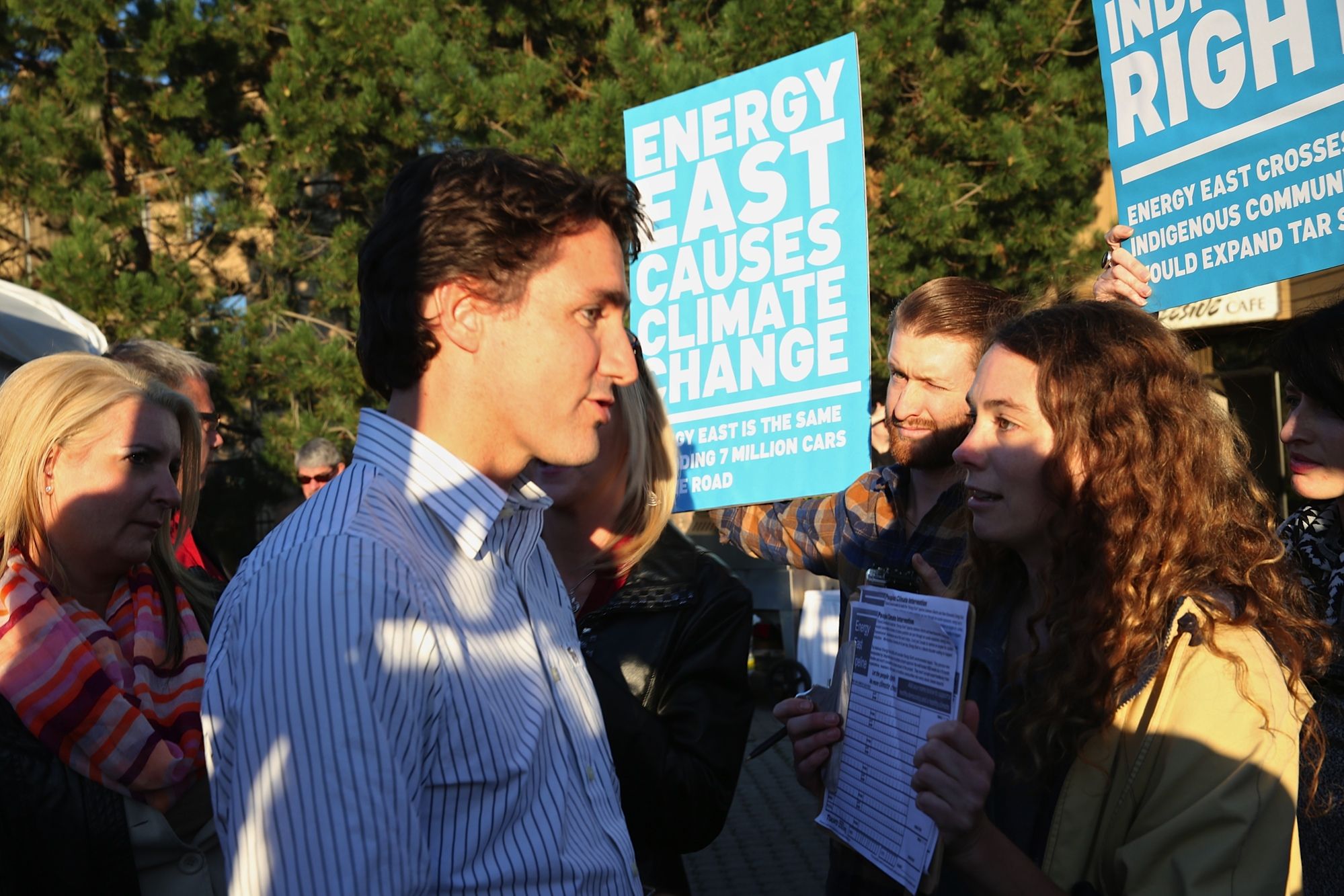 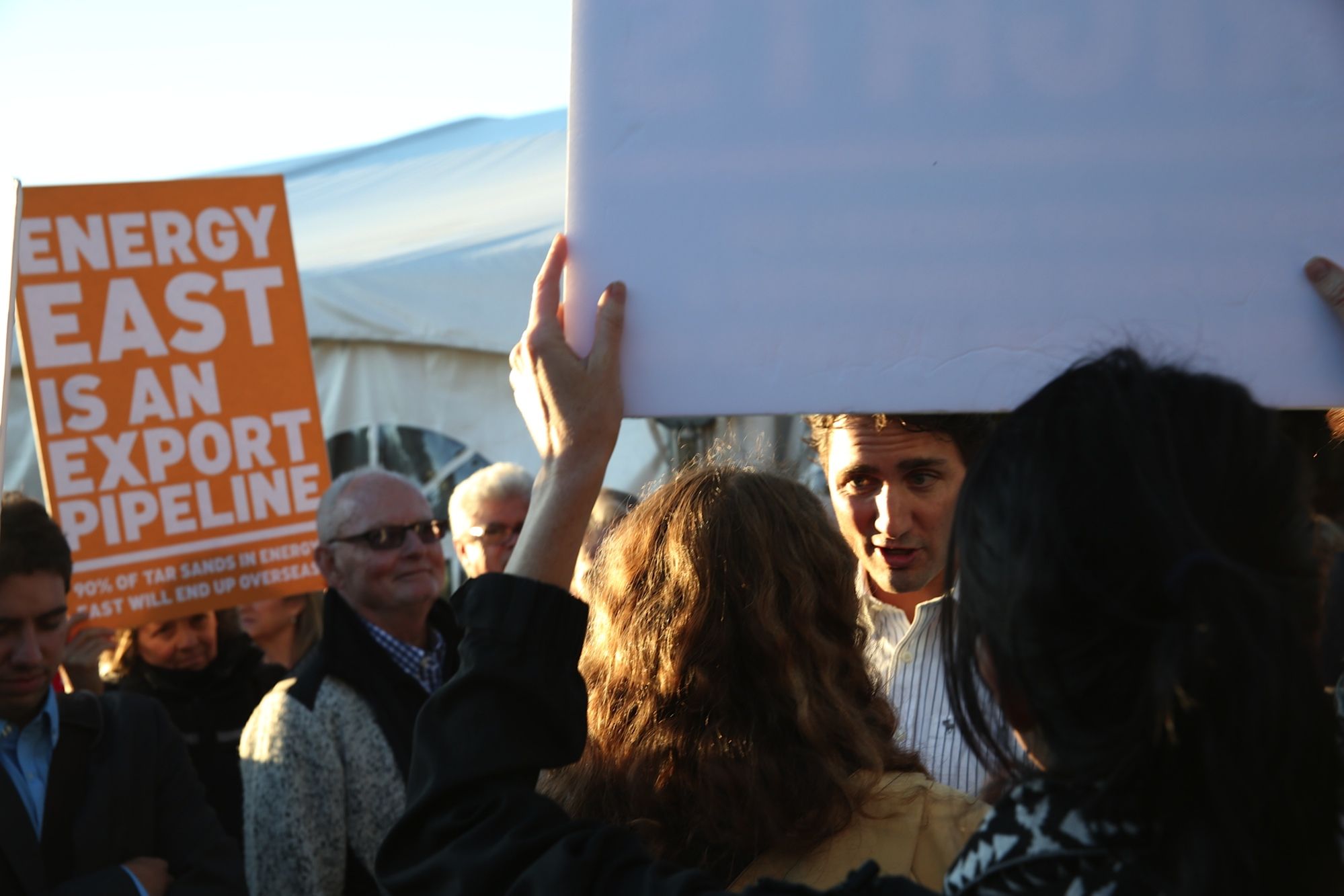