Protecting our Wild and Green Spaces

I have a personal connection to the trees and fields. In the Niagara Peninsula, my family tended a wood lot and lands with very old 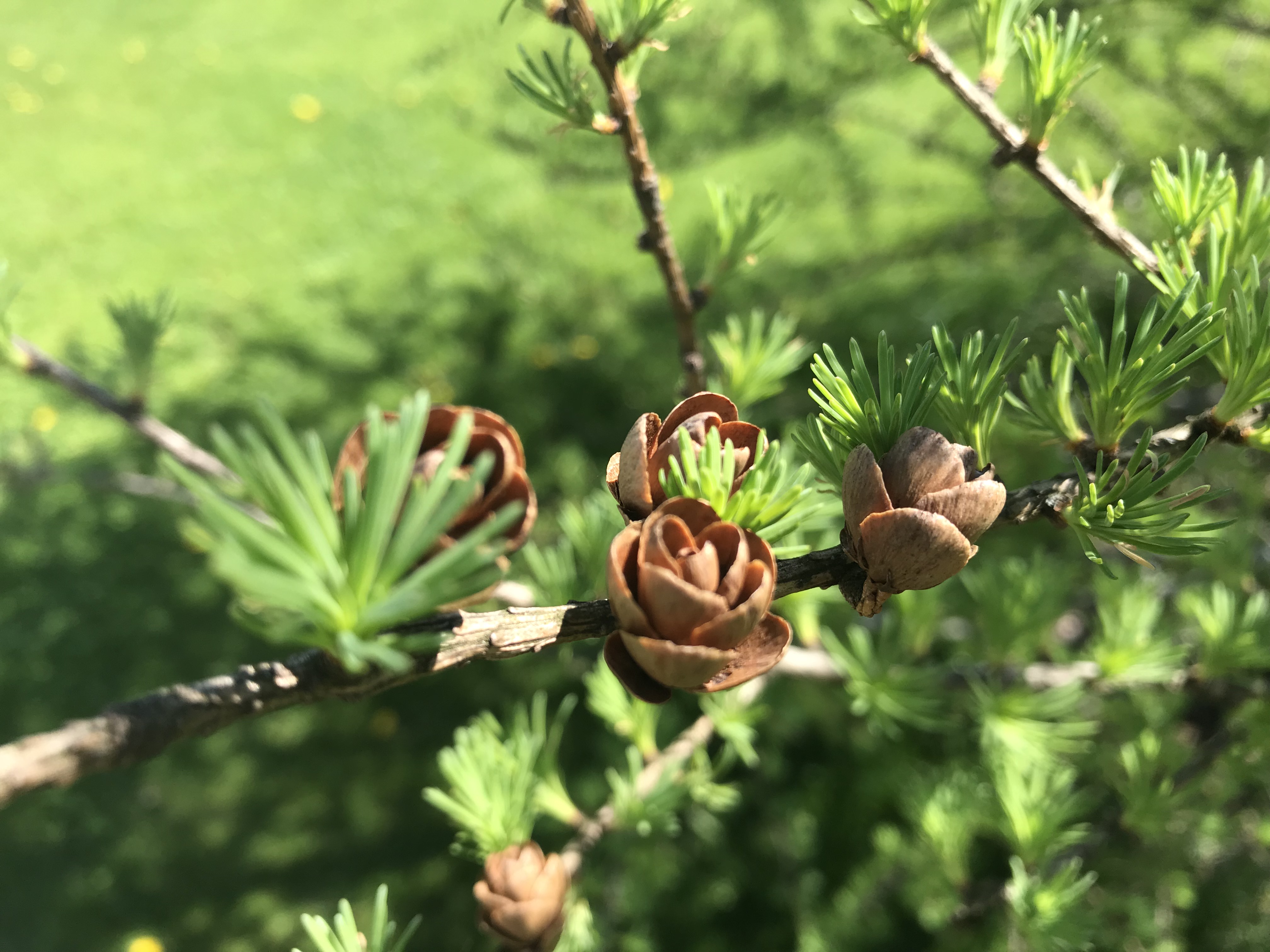 trees on them. When we had to sell our property, the trees that lined the fields and roadside were illegally cut down, and the fine simply paid.

In the poem I wrote afterwards, “Growth Rings,” the trees that had “gestured with tangled branches/nodding a blessing to the sky,” came down in “a violent crash/that struck, resounded/in concentric rings over the earth,” “struck, resounded in concentric rings over our bodies/until the fact act hurt/lodged in our minds” and we watched them “kindle and flash/burn their imprint/on our hearts”.

I believe the wood lot still stands at least in part. My mom and dad serve on the local tree stewardship board and urge the local farmers to practise good soil management. But it strikes me pretty hard, when legislation like Bill 108 is put forward, proposing changes to remove red tape for industry that threaten our wildlife and their habitats, allowing them to go ahead and damage nature for a price. It takes a long time to replace a row of mature trees - decades.

What our Trees Give Us

Awhile back, I saw the movie “The Call of the Forest: The Forgotten Wisdom of Trees.” It presents a distinctive combination of science and poetry, the marriage of medical biochemistry and Druidic-tinged botany, represented in Diana Beresford-Kroeger herself, the elements of forest bathing, the limonene, the alpha and beta aerosols floating off of the trees green leaves and into the lungs.

Diana walks us through her own carefully tended private research garden and arboretum: Carrigliath. In her book, “40 Ways Trees Can Save Us,” she writes that trees contain medicinal compounds and compounds that help shape the weather patterns our civilization depends on. Trees even complete a task called “cloud seeding,” releasing air particles that water droplets form around.

She introduces her Bioplan, saying that we can help the Earth by planting one native tree a year for six years, encouraging others to plant, protecting the trees in our neighbourhoods and native forests and helping ensure that our Boreal forest stays intact.

Reinforcing the importance of protecting our green and wild spaces, The Natural Climate Solutions campaign issued a letter this 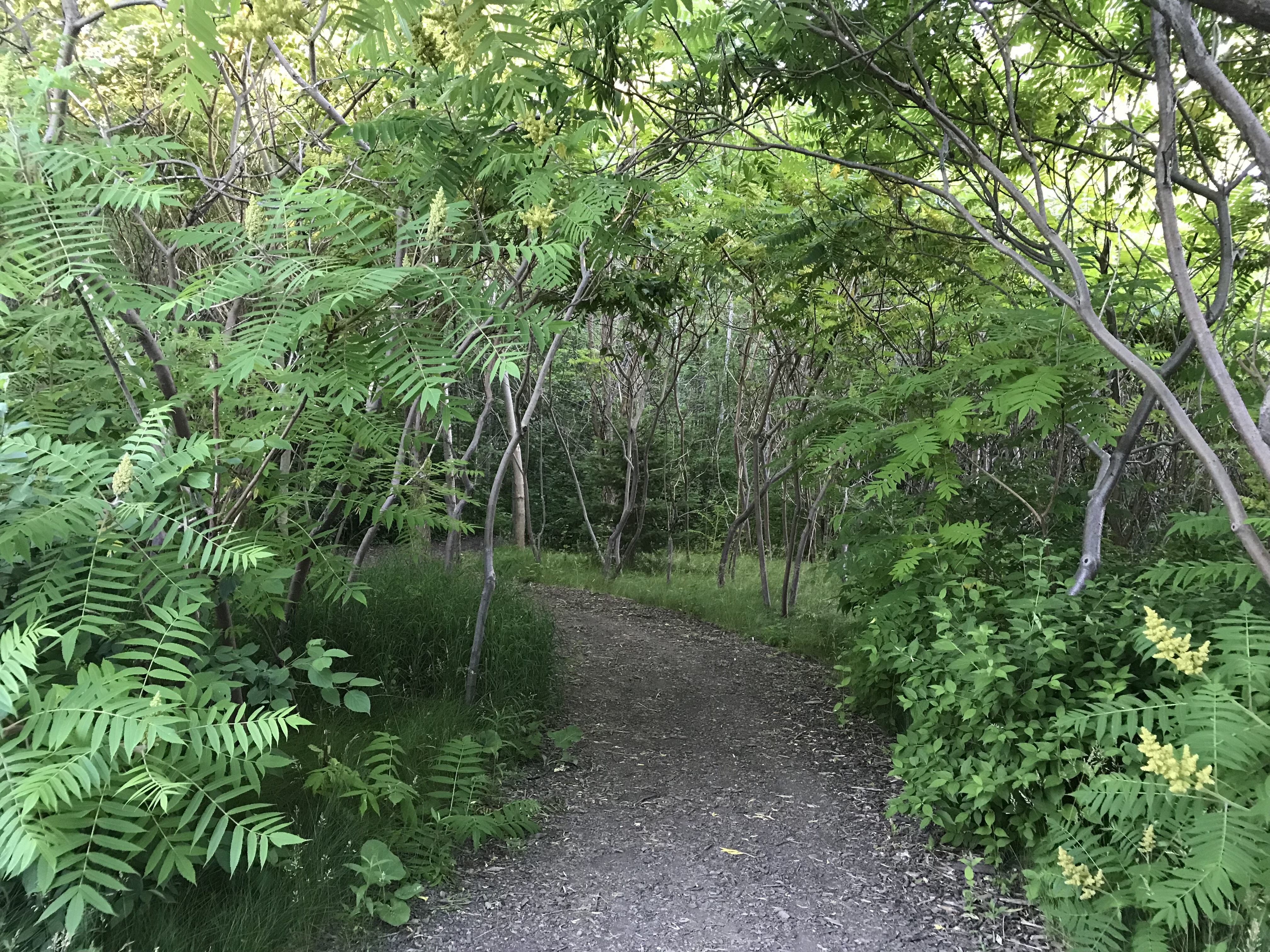 Another 2019 study shows that we could potentially reverse a decade of CO2 emissions by planting trees in parks, woodlots and otherwise unused land across the world.

As explained in an April 19 National Geographic article, along with a shift away from fossil fuels to renewables, we need 50% of our land in a natural state by 2030, to keep global temperatures at relatively safe levels and to keep our ecosystems intact. In The Global Deal for Nature paper, the scientists explain how we can achieve these goals! Notably, 37% of our remaining natural spaces globally are Indigenous lands, so it follows that support for Indigenous land rights and resistance to exploitative extractive projects is important.

Given these hopeful suggestions, the Ontario government’s budget cuts of 50% to conservation authorities (on top of the extensive  cuts previously made) and cancellation of UN applauded plans to plant 50 million trees in South Western Ontario, the most heavily deforested area, are particularly crushing.

The environmental commissioner writes in the 2018 Environmental Protection Report, Chapter 2 on Southern Ontario’s Disappearing Forests, the 50 Million Tree program was one of two remaining Ministry of Natural Resources and Forestry funded projects, as all other provincial projects to encourage afforestation in Southern Ontario were previously cut. Since then, the current government has decided to review the decision to shut down the Ontario Tree Seed Plant that has been in operation since 1923 and assists with afforestation through seed-tracking and storage.

Leaving it to the forestry industry to replant what they cut in more Northern parts of Ontario, will not have the same impact at all! It is not reforestation and while it is important, will not provide the same positive impacts on the climate and for our natural spaces and the creatures who depend on them (including us). These funding cuts are among those that Ontarians fear will set us back environmentally and in many other areas that are crucial for our wellbeing.

Also discouraging, according to research scientists cited in this March 2019 article, Canada’s forests, due to the impacts of fires, disease and drought, are actually currently emitting more carbon than they are drawing down. The article suggests that finding ways to store carbon in wood for longer, planting altered seeds and careful conservation strategies are among the potential solutions.

In Leo Lepiano’s words, “the best thing we can do is ensure that forestry and mining are kept out of the last intact portions of the Boreal forest in the world. The area in Ontario north of the ‘Area of Undertaking’ (where commercial forestry is allowed), and extending into northern Manitoba is the largest intact section of Boreal left in the world, and the second largest intact forest of any 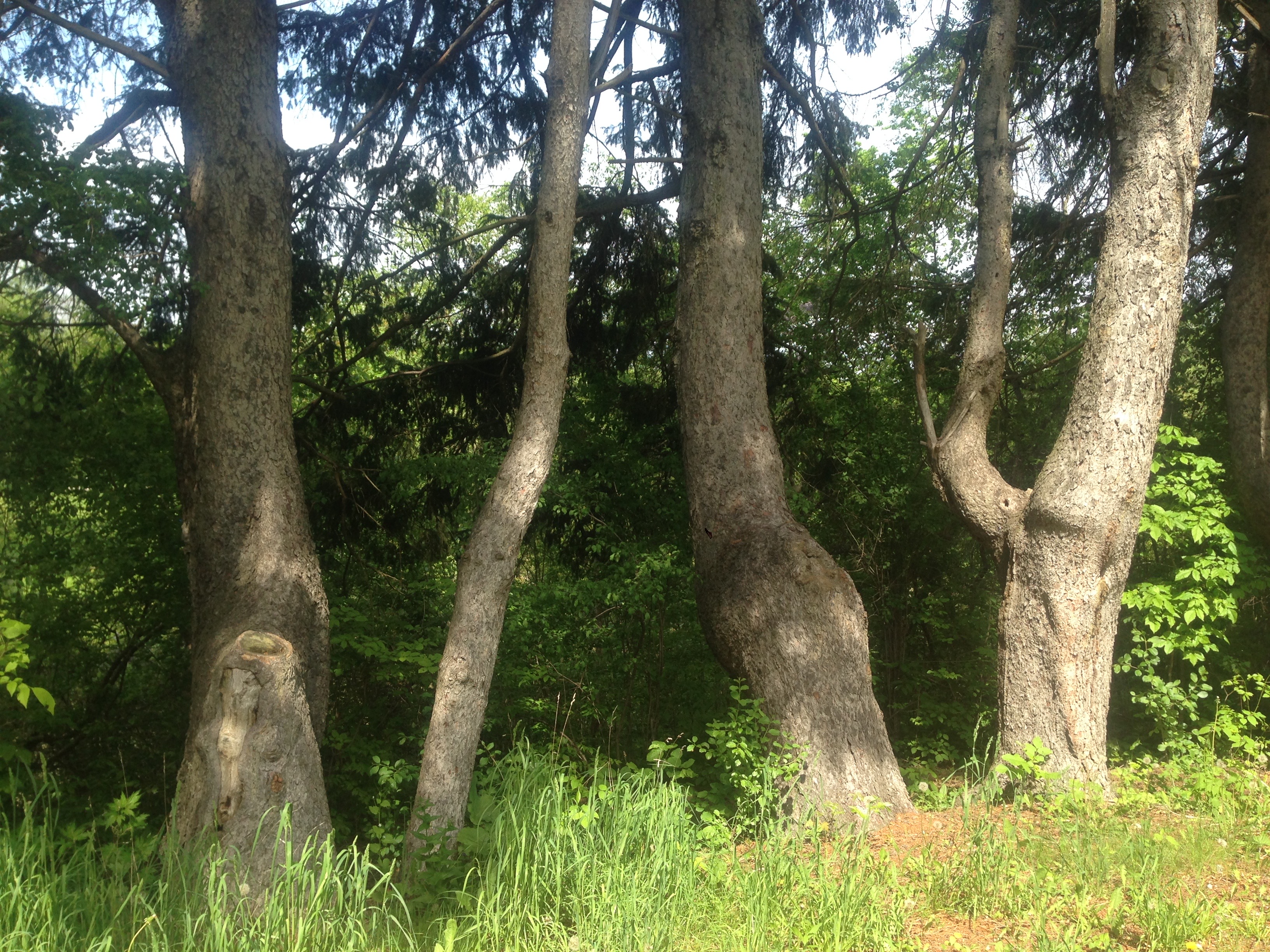 kind left in the world, second only to part of the Amazon. By "intact" I mean that no industrial activity has occurred there (road building, logging, mining). Once the roads go in, the extraction begins; the pattern is the same the world over.”

And yet, the current Ontario government is focused on building roads into the remote Hudson Bay Lowlands, to facilitate the Ring of Fire chromite mines. Concerns include a disruption of First Nations culture and the degradation of a largely untouched ecosystem that is of importance not only locally, but globally.

According to ecologist, John Riley, in an August 2017 Canadian Geographic article by Jessa Gamble, nearly all discussion around developing the area has focused on wealth and excluded environmental protections. He expresses his concern, saying “Canadians must stop being the imperialists of their landscapes — as it has been so often in the history of resource development — and become the land’s stewards first and foremost.”

He explains that the area is comprised of wetlands that not only hold 30 times their weight in water, they draw down more than 12 megatons of carbon dioxide a year. Worldwide, peatlands sequester three times more carbon than boreal and tropical forests combined and the Hudson Bay lowlands houses the biggest peatlands left.

Supporting the need to guard our natural spaces, this past Monday, the UN report on biodiversity came out, detailing Nature’s Dangerous Decline. The press release indicated, in IPBES Chair Sir Robert Watson’s words, “[we] are eroding the very foundations  of our economies, livelihoods, food security, health and quality of life worldwide” but also that “it is not too late to make a difference, but only if we start now at every level from local to global.” The changes needed, he explains further, are "transformative" meaning "a fundamental, system-wide reorganization across technological, economic and social factors, including paradigms, goals and values.”

Specifically to Toronto, the Toronto Ravines Study found that the biodiversity and ecological health of our ravines has declined and are close to ecological collapse unless restored and well-tended - for example, monitored for invasive species and replanted with native species. This is important for the many benefits our ravines give us including flood, erosion and pollution control as well as wildlife habitat. The report encourages steps like that New York has taken to re-establish the health of their ravines. The cities Biodiversity Strategy is in consultation now and the Ravine Strategy is in the works, but these initiatives need ongoing funding.

Amid these challenges, some actions stand out as particularly poignant gestures, ones that reach from heart to heart and help us all hear the messages nature is giving us. One such action was the “Forest Bathing” concert violist and activist Esme Allen-Creighton and pianist Anyssa Neumann held at the Heliconian club last Thursday. 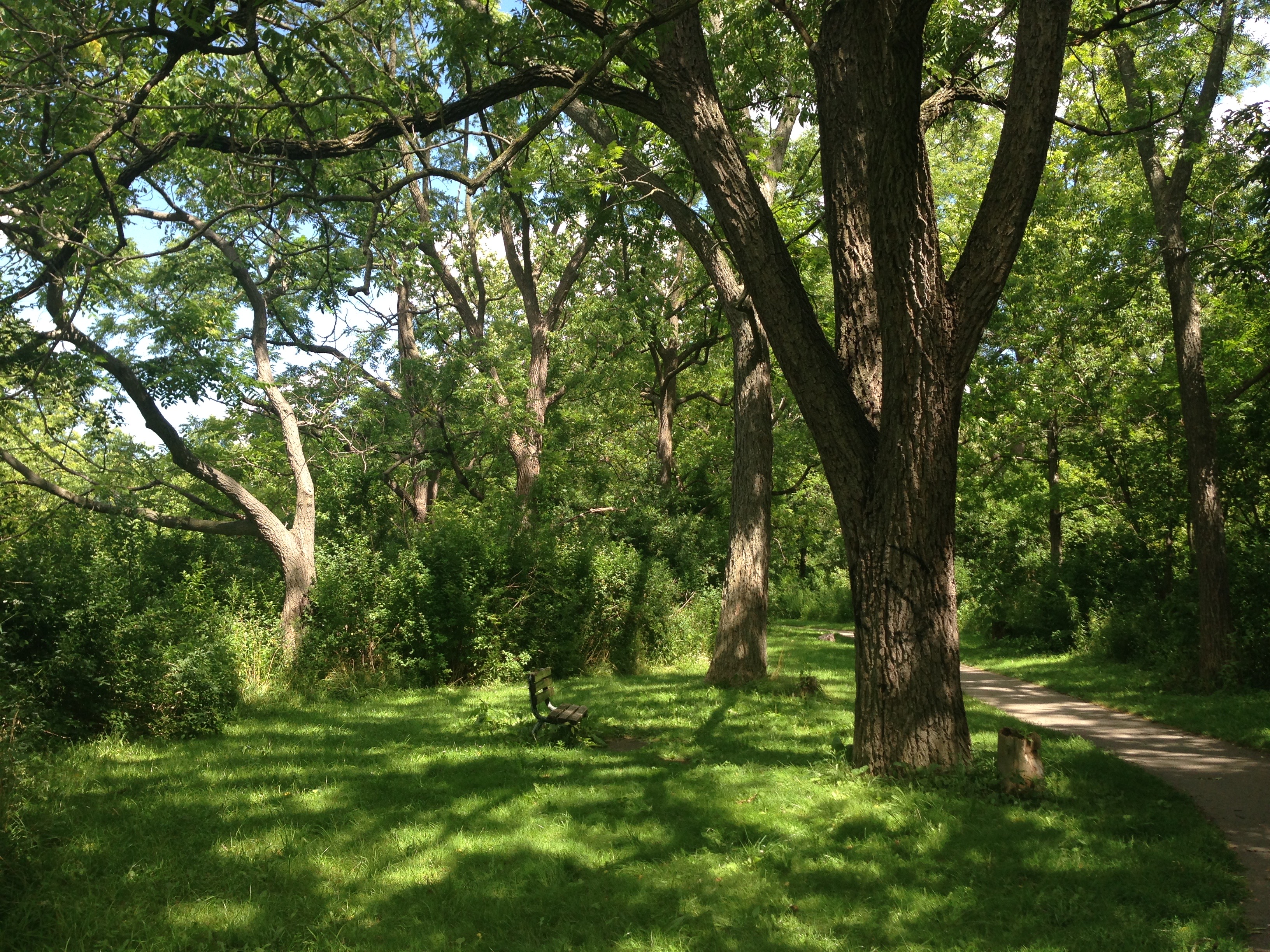 Esme’s beautiful poems (quoted in the following paragraphs) and music led us back to Schumann accompanied childhood forest experiences, through a nightmare with “oaks felled like pickup sticks/Bird wings snapped back/Garbled half howls of wolves,” to the present and Shostakovich, where the forest creatures convened a “Board of Animal Prosperity” and petitioned for their homes. Humans then decided to put a price on the harms they caused, saying:

“See this deed, my kin’s estate

We own this land, there’s no debate!

Logging less for the highest bidder!”

The tension built up as the forest shook the growing damage human’s caused off “like a sopping dog,” healed the gashes in her wilds “so many cracks to fill with green,” and as her resistance rose, “flare[d] her typhoon head” before she gave the fight over to “older gods”.

In the aftermath, we watch the poor grey fox struggle to keep her pups alive, but “she can’t pin the stars back up,” and finally, to the sounds of Hindemith, we are left in the balance with everything else, left with the question, “Does the forest break/Do we break?”

Here are a few action ideas....