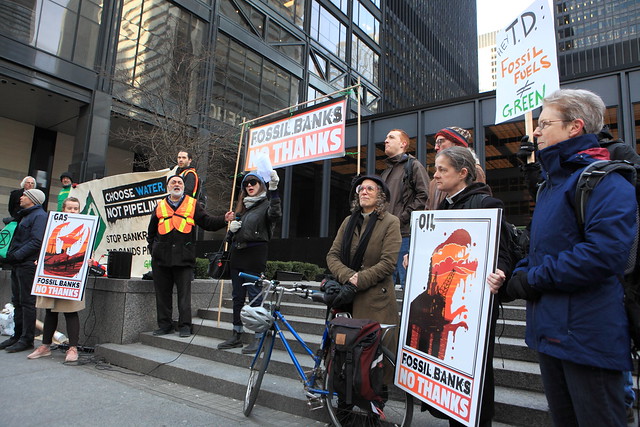 On April 4th, Toronto350 teamed up with the Fossil Banks, No Thanks! campaign to lead a demonstration outside Toronto Dominion Bank’s Annual Shareholders’ Meeting. Toronto350 demanded that the bank’s lending and financing activities align with a safe climate. Independently, TD shareholders at the meeting considered a proposal to withdraw financing from greenhouse gas polluting projects. (Photo above by Milan Ilnyckyj).

The Rally for Green Investment, timed for the hour before TD’s Annual Shareholders’ Meeting, happened to be on the morning 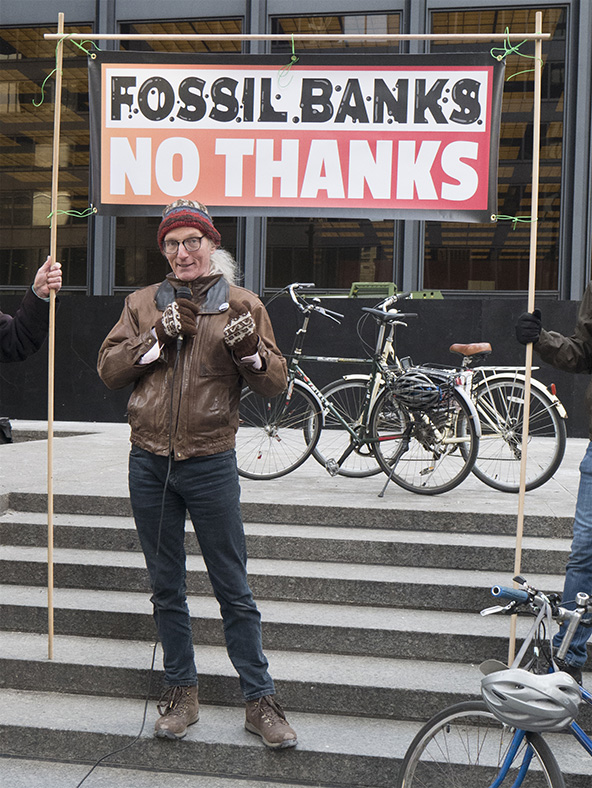 after a speech in Toronto by Bill McKibben, the founder of 350.org. In his talk, McKibben emphasized the role of banks, insurance companies and other investment bodies in maintaining the flow of capital to fossil fuel companies. Of course, this results in ever-rising CO2 emissions and seriously inadequate investment for much needed climate solutions. He strongly urged his audience to participate in the rally and in every effort to challenge business as usual.

As Tony Rapoport of Toronto350, (pictured at right, photo by Orville Cummings) explained:

“TD Bank has said that they intend to provide 100 billion dollars in financing for a green transition by 2030. But if their pattern of the last three years continues, by 2030 they’ll have invested 135 billion dollars in fossil fuel expansion. That’s their idea of balance: they’re burning up the planet to make money. They want to have their cake and poison it, too. It’s unacceptable.”

At the rally, Toronto350 had the advantage of powerful graphics and content provided by our international partner, the “Fossil Banks, No Thanks!” Campaign (banktrack.org). The group was positioned directly beside the main entrance to the meeting venue, with broad steps providing a natural stage in front of the crowd. The weather was clear, though cold. 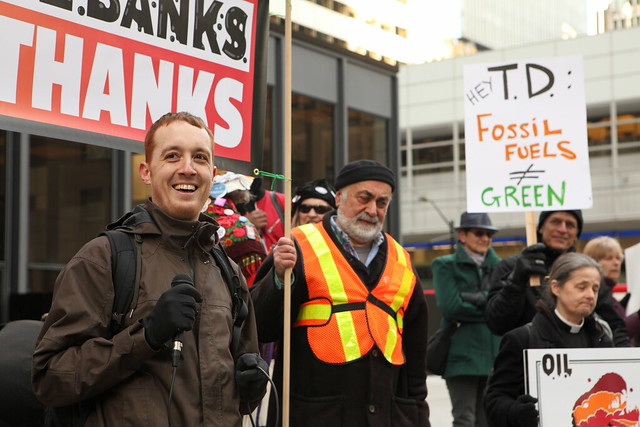 The speakers, each representing a different environmental or social justice group, expressed strong and sensible perspectives on the issue of private banking and lack of support for the urgently needed shift to a carbon-free economy. Alex Speers of Greenpeace (pictured at left, photo by Milan Ilnyckyj) spoke about their campaign to encourage the city of Toronto to join a growing list of cities suing major fossil fuel companies for damages due to climate change.

John Clarke of the Ontario Coalition Against Poverty, spoke out about the injustice involved, saying:

“It is quite mind boggling. Here we are, standing on a sidewalk, putting forward a proposition about the need to intervene to save this planet from vast ecological destruction caused by the burning of fossil fuel. The overwhelming scientific consensus is that we’re right. And yet we stand here with a bunch of cops ready to exclude us from a place where people are making decisions that impact people’s lives adversely to an incredible degree.” 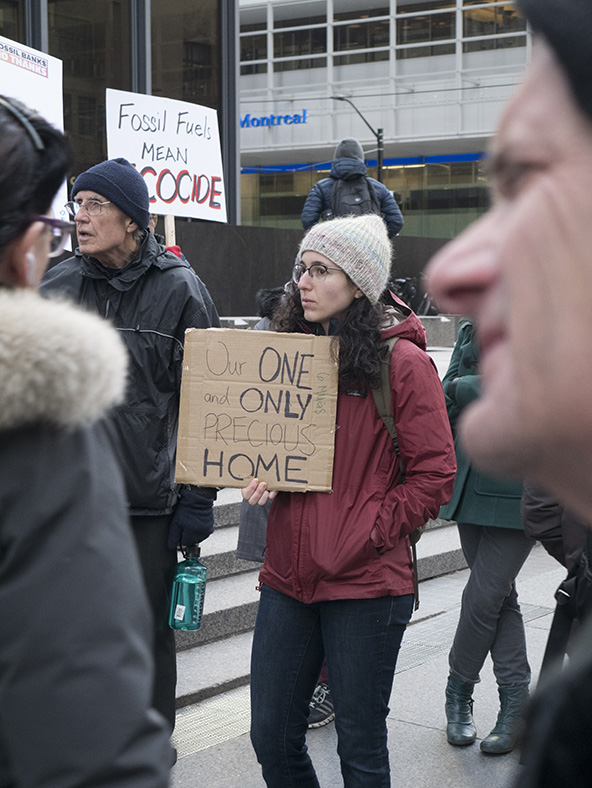 Inside the Shareholders’ Meeting, rally speaker Amelia Meister presented a 15,000-name petition from SumOfUs on fossil fuel divestment, with a breakdown of signers who are also TD customers and shareholders. The TD CEO, Bharat Masrani, responded by describing the bank’s commitment to financing elements of the transition to a green economy and to UN-sponsored reporting standards, but rejected any limits on their involvement in fossil fuels. In the past these UN standards act as more of a smokescreen for conventional practice at banks, investment and pension funds.

In Amelia's words, “It is time that banks understand that they are complicit in the climate crisis through funding fossil fuel expansion and fossil fuel projects. We need banks to pull the plug. I’m going to be heading in and letting them know that, and asking them to heed the will of fifteen thousand people and more who want this to happen.” 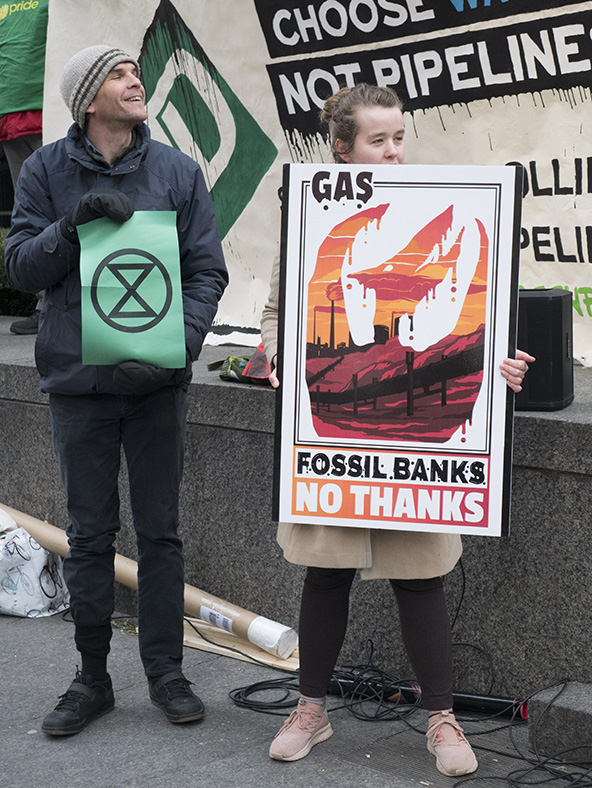 There was also a Shareholder Proposal on divestment, but the sponsor was not able to be present, so it was not part of the meeting agenda.

A Now Magazine journalist was present at the rally and the meeting, and briefly interviewed the CEO. Her material will be part of an upcoming story in that magazine.

(Photo at left by Orville Cummings)