Once again, with great disappointment, TO350 responds to the news that the TMX has been green-lighted by the federal government. 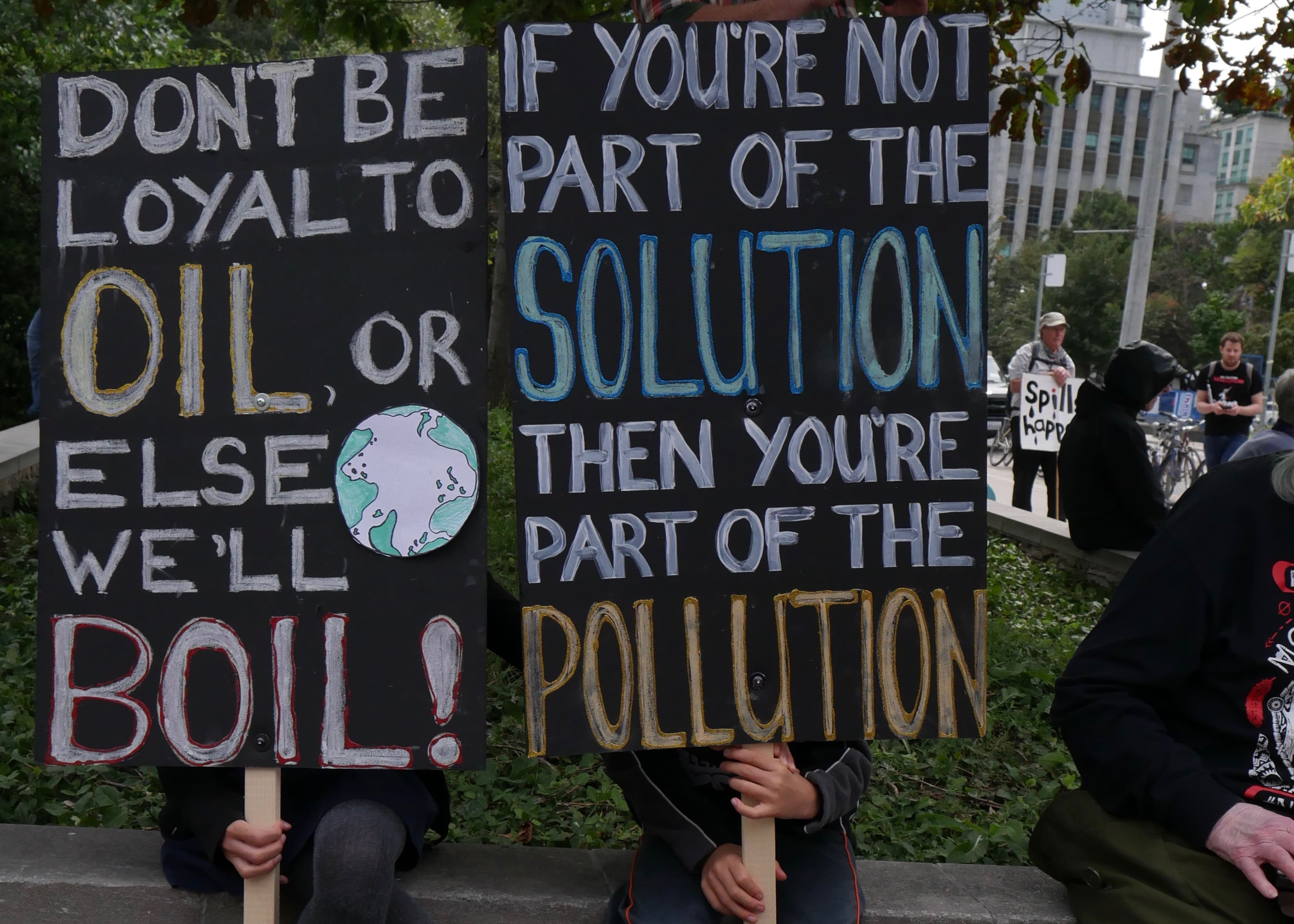 In May, the parts per million of CO2 in the atmosphere reached a new high of 414.8. This represents the seventh consecutive year that global levels have risen steeply. Prior to the industrial use of fossil fuels, we were at a level of about 280 and 350 is considered a safe upper limit.

Some of us are also aware that the changes - wide sweeping, cross-sector changes - must begin now and happen rapidly, that the climate crisis poses an all-out emergency.

This stance is not fear-mongering, hysterical, or the domain of far-left environmentalists. This stance is supported by the best science of the day. It is also supported by practical experience - Floods in Ontario have quadrupled since 1980 . There were 1,325 forest fires last summer. Tics have multiplied in Southern Ontario, and the threat of Lyme disease is on the rise.

In 2013, floods cost upwards of $940 million in damage in Ontario and in the first nine months of last year, the Insurance Bureau of Canada estimated that extreme weather had caused about a billion in damage.

In Canada, temperatures are projected to increase at more than twice the global rate with warming of 6.5°C possible by the end of the century. The number of days above 30 Celsius in Toronto could almost double by 2050 and 240 people a year are expected to die due to heat-related illness. The global impacts threaten clean air, safe drinking water, sufficient food and secure shelter.

As Greta Thunberg, student strike activist said in her speech at Davos in January, “I want you to act as if our house is on fire. Because it is.” We need to decrease emissions now.

In Canada, the oil and gas industry is our biggest emitter and the tar sands contribute the most to that pollution. The continued planned high output from this sector places an unfair burden for reducing emissions on other Canadian sectors and short circuits our efforts to keep global temperatures from escalating.

The idea, for the TMX, is to sell Canada’s bitumen - a cheaper, harder to refine and dirtier oil than conventional crude - to other countries. This plan has a few repercussions.  For example, Canada is currently not held responsible for the emissions caused when our oil is bought and burned offshore - 80% of the emissions! Producing and selling our tar sands oil will most certainly prolong the global clean energy transition and make meeting our international commitments unlikely. In effect, Canada plans to continue to profit from the extractive economy, while the most vulnerable experience a disproportionate amount of the consequences.

Studies like the “Sky’s Limit” reports done by Oil Change International show that we can no longer expand fossil fuel infrastructure. Studies that reveal emissions from Canadian tar sands are up to 64% higher than reported and methane/CO2 from thawing permafrost up to two times higher than expected, show the situation is ever more critical.

As of now, 2019, there is no carbon budget left to exploit. We must get to net-zero emissions and also throw our weight behind carbon drawdown methods.

Recently, the Guardian decided that accuracy requires the use of the phrases “climate emergency, crisis or breakdown” instead of “climate change.” The CBC decided, in contrast, that the use of the words crisis and emergency must be approached with caution, because they, in Paul Hambleton, the CBC's director of journalistic standards words, have “a whiff of advocacy to them” and  “sort of imply, you know, something more serious, where climate change and global warming are more neutral terms." (from "Is climate change actually a 'climate crisis'? Some think so" by Brian Labby, Jun 10th, 2019, cbc.ca)

There is a real need for honest conversations now, with each other, in our communities, at our workplaces, publicly, in the media, in government - ones where we admit the need to rapidly stop using Fossil Fuels, that it is an emergency, that our notion of wealth and growth must change.

If we are honest, a healthier and more hopeful future is possible. But, the longer misinformation gets a platform, the whole truth isn't faced, or the very industry that is most damaging to the public good is subsidized and supported, that better future becomes less and less likely.

A case in point, the senate just recently made changes to Bill-69, a proposed update to our environmental assessment process. In some cases, the amendments quote the oil industry lobbyists verbatim. These industry lobbyists have vast resources, and met with senators 224 times about Bill C-69, representing 80% of the lobbying.

Despite accusations of foreign-funding, environmental lobbyists just cannot compete with corporations that often, as in the case of Imperial Oil and Nexen Energy, are actually foreign-owned. The TMX was just such a company, with US owners, before the Canadian government bailed them out with billions of Canadian tax dollars.

Support for the TMX is even more distressing, when we recognize that Canada has the technology, resources and know-how to make the shift to a clean energy system, a re-valued economy and a more just society. It is even more unconscionable, when we admit Canada has the means to help affected workers use their skills in new, more sustainable roles. Just one example - decades of good jobs for current oil and gas workers could come from cleaning up the extensive tailings ponds the oil and gas industry leaves in its wake.

Now here’s a thought (inspired by The Canadian Pact for a Green New Deal): by transitioning rapidly now, by revaluing our economy, we could create a massive number of jobs in green industry, we could prioritize a culture of care and jobs in low-carbon fields, we could hold the industries most responsible for the climate crisis accountable and create fairer taxation so that those who have benefitted most give back to those who experienced exploitation, scarcity and precariousness.

According to Naomi Klein, in her speech at the Green New Deal Town Hall held on June 13, 50 billion a year is hoarded in stocks. 71% of CO2 emissions can be traced back to 100 companies, a lot of them complicit in spreading misinformation about climate change. The average salary among the top paid one hundred CEOs in Canada was 204 times more than the annual average Canadian wage. Fairer taxation and honest accountability could go a long way to fund every single one of the rapid changes we need to heal the current triumvirate of crisis - social, climate and biodiversity.

One of the first and most vital things Canada can do to begin a graceful, societal transition is to no longer approve or build new fossil fuel infrastructure. That means saying no to the TMX.

TO350 has expressed its viewpoint around the TMX before. It has not changed. Here is the letter that we faxed in during the reassessment of tanker traffic in BC:

Despite our disappointment, we continue to stand with those in BC, with Indigenous people on the frontlines and with all of those who dare to speak the truth and resist the continuation of a status-quo that is literally destroying the world on which we depend.