Sound the Alarm Call to Action

People all across the world have been waking up to alarms, health warnings and evacuation alerts because of wildfires, storms, flooding and dangerous air quality. They couldn't ignore the climate crisis and neither should our politicians.

That’s why, the morning of the Trans Mountain crown corporation annual meeting, we’re sounding the alarm. 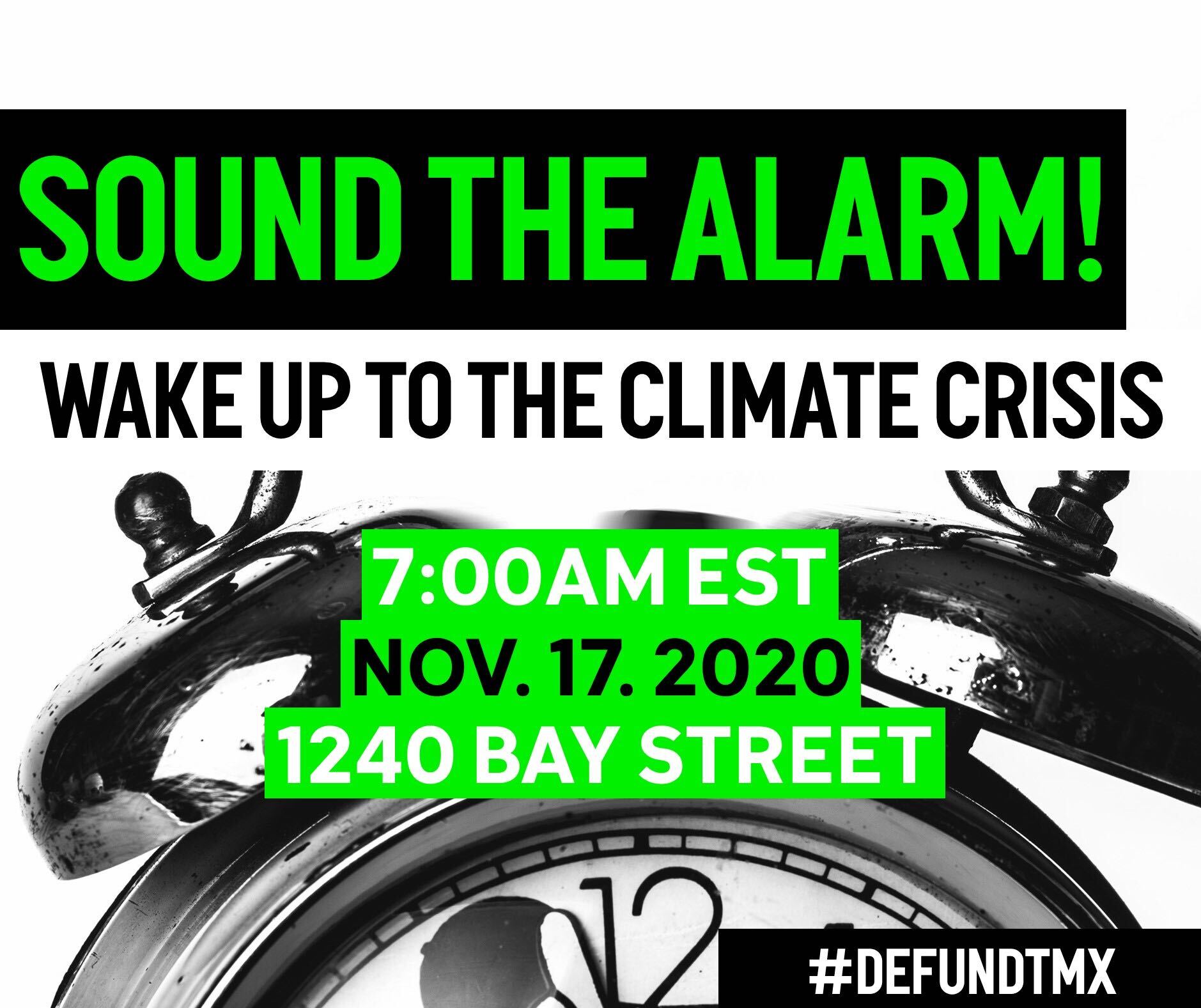 Sign-up for our static, COVID-compliant demonstration here: TO350 Sound the Alarm Event.

Not in Toronto? Check out 350Canada's event page to see if there's an action near you!

The federal government has spent $4.5 billion on TMX so far. Its planned expansion is now expected to cost an additional $11.5 billion.(1)

To make the money back, tar sands production will need to keep expanding, and global demand will need to keep growing, for decades. If the world acts to avoid the worst effects of climate change, TMX will never recoup its start-up costs. The promised jobs and revenues will disappear.

The government acknowledges only the “upstream” climate impacts of TMX; construction and operation will produce 400,000 tons of CO2 annually. But they have refused to consider the “downstream” impacts. When the end use of the oil carried through the pipeline is included, resulting emissions grow to 79,900,000 tons annually.(2)

In July 2020, the Supreme Court refused to hear an appeal of the TMX approval from Squamish Nation, Tsleil-Waututh Nation, the Ts'elxwéyeqw Tribes and Coldwater Indian Band.(3) While the project has entered into benefit agreements with local Indigenous councils along its route, the failure to recognize Indigenous sovereignty, resolve land claims, or implement the United Nations Declaration on the Rights of Indigenous Peoples, puts Indigenous Nations and communities at a terrible disadvantage in negotiations.

A viable recovery from Covid-19, the resulting economic crisis, and the climate crisis, can only be accomplished by a coordinated national response and unprecedented public investment. Programs like the TMX, which worsen the climate crisis while attempting to create economic benefit, are doomed to fail.

Building the Trans Mountain pipeline doesn’t create long term jobs, makes the climate crisis worse, fails to respect Indigenous rights and takes public money away from tackling the pandemic and recession. This project didn’t make sense when Justin Trudeau bought it, and it makes even less sense now. Defunding it is the best choice.

Our political leaders are not meeting the crises we’re facing at the scale we need. It’s up to us to shake them out of their complacency and send a clear message that business as usual isn’t working. We need big, bold ideas – like defunding TMX and redirecting those billions of dollars to invest in a Green New Deal.

2. Impact on GHG Emissions and Climate Targets of the Trands Mountain Expansion Project. Report prepared for the City of Vancouver by MK Jaccard and Associates, May 14, 2014. https://vancouver.ca/images/web/pipeline/Mark-Jaccard-impact-of-GHG-targets.pdf