The IPCC Report and Climate Action

The Intergovernmental Panel on Climate Change (IPCC) has released its special report on the impacts of climate change at 1.5°C and 2°C.

The results are clear - if the world keeps warming below 1.5°C, it will prevent an already dire situation from becoming so much worse. Among other impacts, ocean acidification, forest fires, falling crop yields, heat deaths and the spread of vector-borne disease all increase as the temperature rises. 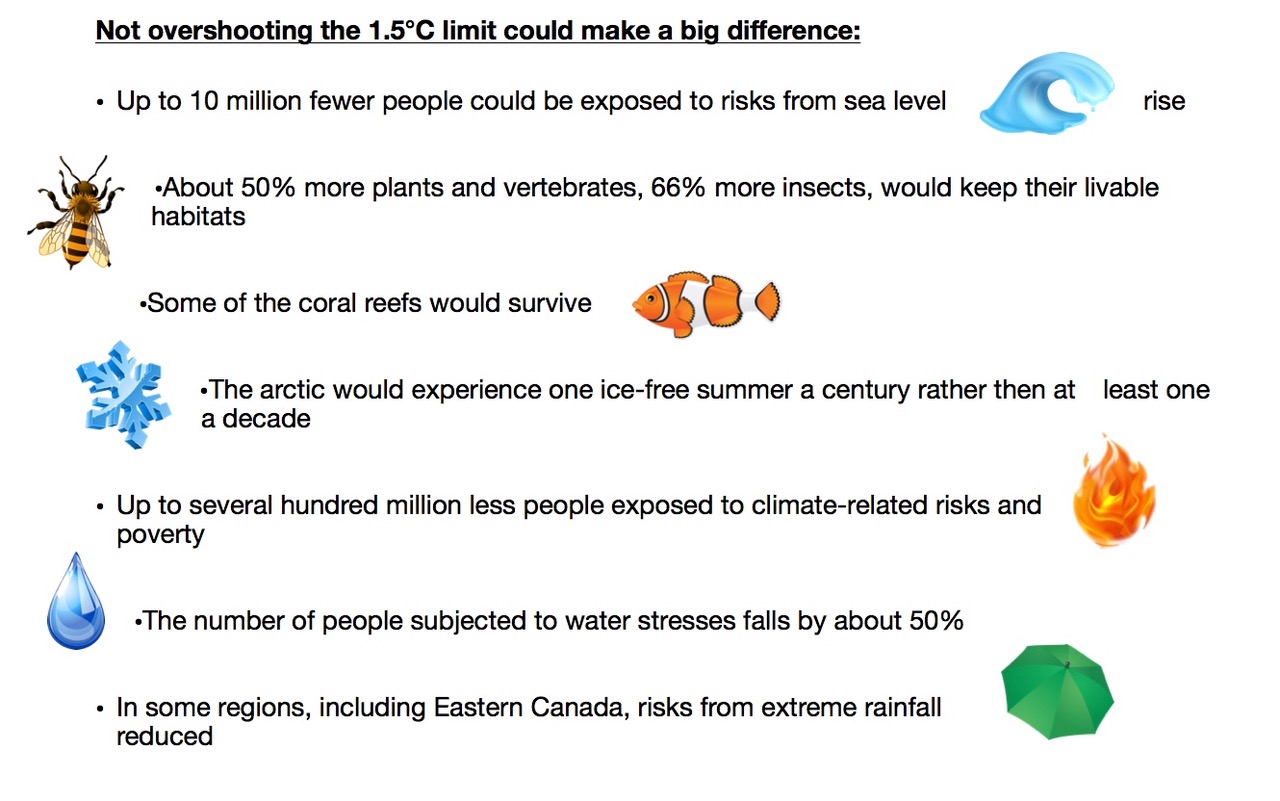 As Hans-Otto Pörtner, Co-Chair of IPCC Working Group II articulates, “Every extra bit of warming matters, especially since warming of 1.5ºC or higher increases the risk associated with long-lasting or irreversible changes, such as the loss of some ecosystems.”1

The report states that we need a rapid shift that spans all sectors - land use, energy, industry, finance, buildings, transport and cities. Emissions caused by humans must fall by about 45% from 2010 levels by 2030 and reach net-zero by about 2050 (although other sources say this needs to happen even more quickly). Any remaining emissions then need to be removed from the air. Carbon dioxide removal (CDR) methods often involve technology that are largely unproven.  Natural, proven methods, like afforestation, could potentially come into conflict with food cultivation and bio-fuel production.  So, it is critical that we decrease emissions quickly and minimize the amount of CDR needed.

More bad news is that if we follow current plans, we are on a pathway to 3°C or more with global warming likely to hit 1.5°C as soon as 2030. However, emissions to date are unlikely to push global temperatures to 1.5°C. So, we can have an impact by reducing output now!

What we Need to Change

Lower energy use to meet demand and faster electrification of energy sources are characteristic of 1.5°C pathways. In order to keep temperatures below 1.5°C, renewables need to scale up rapidly and make up 70-85% of electricity supply by 2050. Even if we do allow for break throughs in CCS, the share of gas in the electricity supply would be about 8% and coal 0%. 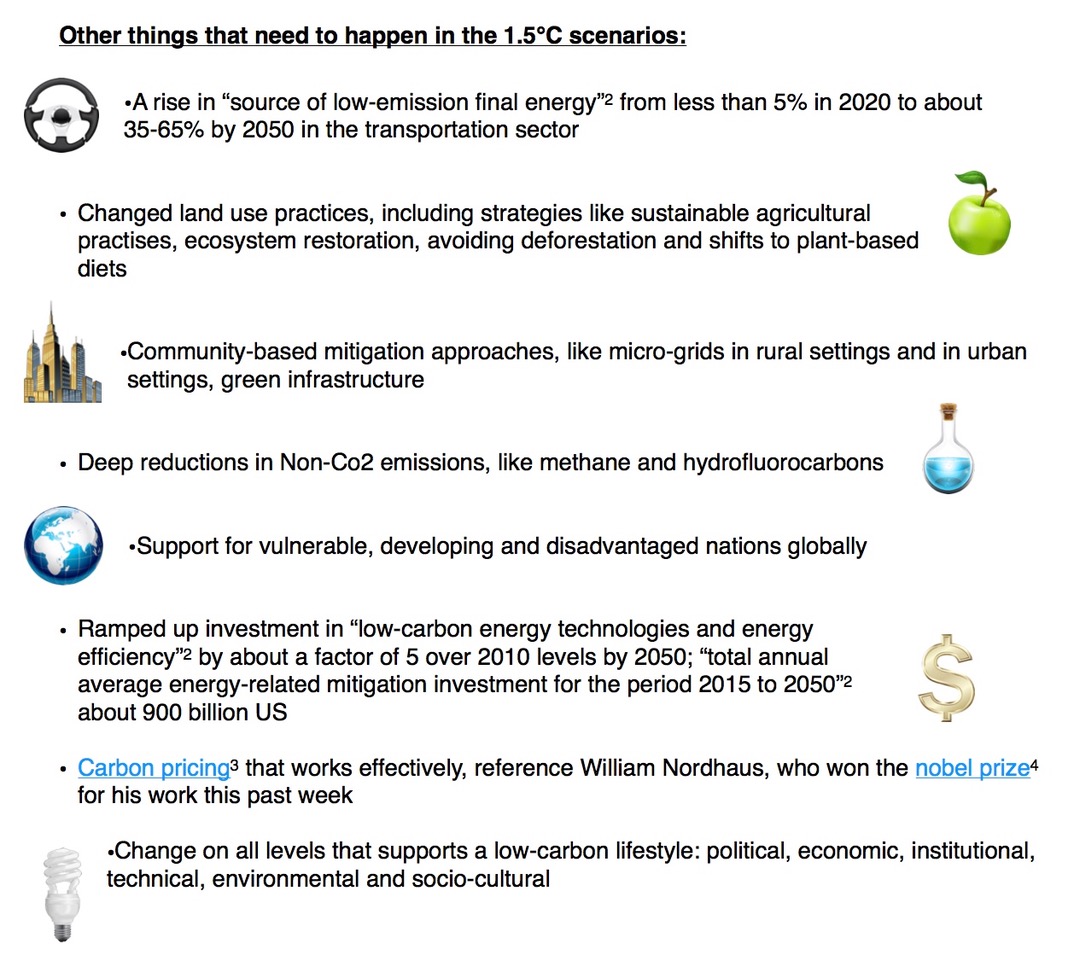 In Canada, it is important that we turn away from fossil fuels and invest in clean energy. There is no pathway to 1.5°C that includes further development of fossil fuels. As the report points out, economies like ours, that are currently highly dependent on fossil fuel need to employ policies that diversify their economies and the energy sector.

Instead, our federal government has purchased a major oil expansion project with public funds and plans to develop our oil and gas industry at the expense of emissions reductions. At the same time, Environment Canada has no explanation for how we will reach our current emissions targets (yes, the ones that will take us to 3°C).

The report signals that Canada could upscale renewable forms of energy instead, as the “feasibility of solar energy, wind energy and electricity storage technologies have substantially improved over past few years. These improvements signal a potential system transition in electricity generation.”2

For its directness, the report is a gift. By legitimizing the facts that environmentalists and scientists have known for some time, it has the potential to break down political and institutional barriers to climate action. The fact that continued CO2 output at current levels is speeding us toward ever-increasing catastrophe is indisputable. The idea that we need a deep cultural and economic shift is no longer radical. The urgency of climate change has gone mainstream. 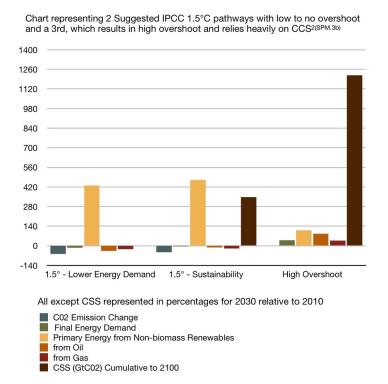 As a second gift, the report outlines different, potential pathways we can take to keep warming below 1.5°C. See the chart for a comparison of 3 pathways, based on selected data from IPCC chart SPM-3b.  As you see, the third pathway relies quite heavily on carbon capture and storage to make up for high overshoot.

The IPCC report is also helping raise awareness of climate issues in the media, and thus the general public. Recently, the Star has had several articles referencing the IPCC report, including this one about climate and the Toronto election and several letters to the editor touching on climate change. One of the forums my husband frequents has a thread on climate change. People who have never participated are jumping in, asking if their children are going to be okay. And at my local all-candidates debate, almost half the questions related to climate change - flood management, transit, bike lanes and TransformTO, Toronto’s climate plan.

As some of the barriers to taking action that would keep temperatures to below 1.5°C are also socio-cultural, indicating that behaviour and lifestyles need to change, this type of community involvement, information-sharing and education is important.

Helping people see the benefits of the shift to a low-carbon lifestyle is key. People are more likely to accept rather then inhibit the policies and programs necessary to keep global warming down, if they see them as fair, equally distributed and are not afraid of consequences of change.

This brings us to a last piece of good news - following the pathways the report suggests for reducing emissions has significant co-benefits for sustainable development, reducing inequality and poverty reduction! We can, through careful and ethical planning, make the world a better place while we reduce the impacts of climate change.

The report is a clear warning, we need immediate action on all fronts to keep global warming down. It is urgent that our policy-makers get the IPCC’s message and facilitate the changes needed. As Debra Roberts, Co-Chair of IPCC Working Group II says, “The next few years are probably the most important in our history.”1

So, what does the report’s news mean for those of us who care deeply about acting to protect the environment, the wildlife that depends on it and each other? Facing how bad things are is difficult. We might need some time to grieve and to support one another.

Some may also use this report to justify defeatism, even to swing from denial to defeat. They may even use it to justify a lack of change or to rollback current environmental protections, as done recently in the US, with the freeze on fuel efficiency standards.

Yet, the weight of the report and its prescription for action gives us an opportunity to speak with greater impact, to politicians, institutions, businesses and our fellow citizens. We can help put these facts in front of those who hold the responsibility that comes with leadership. We can accelerate our activism, raise our voices, build alliances and create change.

Here are some ideas:

And here is a cheat sheet: Talking to Politician’s pdf