TORONTO, Ontario – On March 12, hundreds of community members gathered at the offices of five local Members of Parliament as part of a national day of action calling for the passage and implementation of a Just Transition Act. The event comes in the wake of the IPCC’s most alarming climate report yet, released earlier this month. 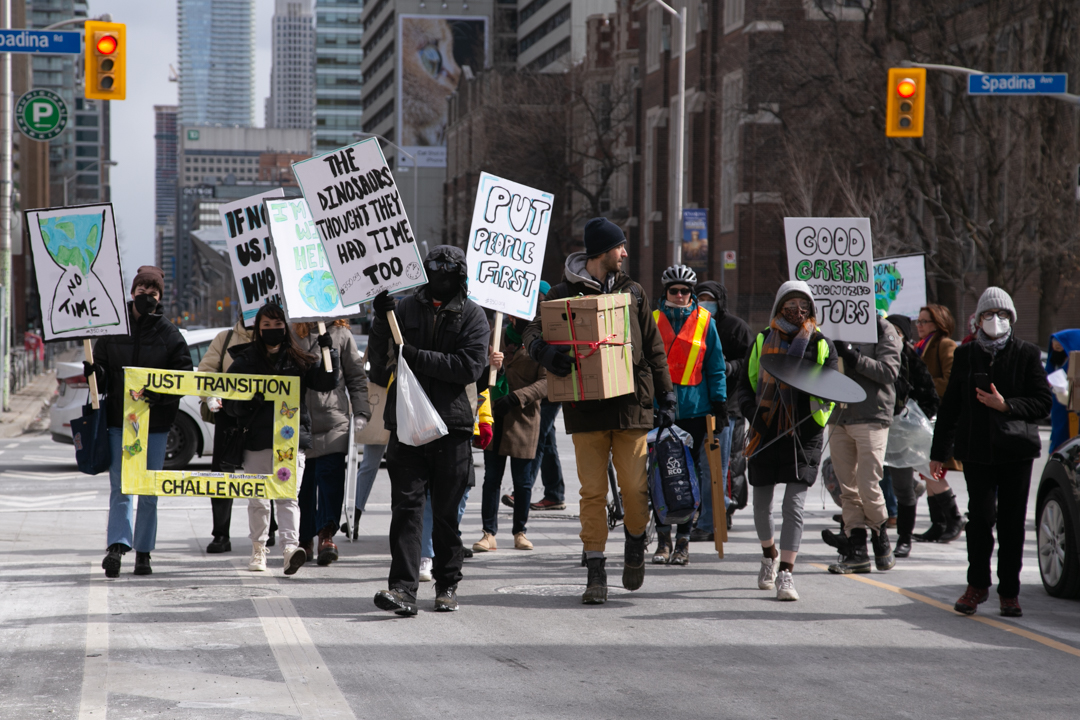 “As the IPCC report demonstrates, the destructive impacts of climate change are already happening -- and they're only going to get worse.  We need to take bold climate action, and we need it now.” says Mark Simmons, one of the event organizers and member of Toronto climate group Toronto350, “That's why we are gathering today to insist that the federal government pass the Just Transition legislation they promised us in 2019.  We simply can't afford to wait any longer.”

A coalition of Toronto climate groups are pushing for swift legislation to transition away from a reliance on fossil fuels, in a process that centers the most affected and uplifts underserved communities at the same time. In 2019, the Federal Government promised that a Transition Act would take hold, that would prioritize the investment in green energy, create thousands of jobs, and provide social safety nets and new job training for workers currently employed in the oil and sectors. With the Russia-Ukraine conflict making it all the more apparent how reliant on oil & gas Canadians are, it seems like the perfect time to make a shift to renewable energy, to help create an entirely independent Canadian energy economy.

"The global shift to renewable energy is a huge economic opportunity, but if done incorrectly will prove detrimental to those working in the oil & gas industry” said event organizer Tom Deadman, "Without a Just Transition, it could also be a missed opportunity for marginalized communities who could stand to benefit from the creation of jobs and training support. The government must keep their promise to pass the Just Transition Act, to ensure the economic benefits are fairly distributed."

Since 2019, no real action beyond consultations have been taken, and this stagnation is what inspired the national day of action and the events that took place across Toronto. The events were full of attendees celebrating as if a Just Transition Ministry had taken hold, with dancing, live music from local choirs and bands including the infamous Raging Grannies; inspiring speeches from climate experts, local politicians, and youth on the frontlines, trivia games and interactive opportunities for participants to name why they’re demanding a Just Transition, and an overall atmosphere of joy, you could almost imagine a brighter future wherein Canadians aren’t continuously preparing for climate disasters.

"It's extremely urgent that we put all our collective resources and government spending into a just green transition.  We must reduce emissions by 60% by 2030 and we haven't even started  yet.” Said Lyn Adamson, Climate Activist and co-chair of Climate Fast, “A Just Transition Act and priority in the spring budget is essential. We must spend what it takes to win - and we must do this on nature's timeline.”

Lyn continued to say “It's even more important that we stand up strong as citizens, as we are doing in today's Day of Action, to say enough is enough, especially given the push for new oil and gas during the war in Ukraine and the sanctions on Russia. This must be the moment we say “No more fossil fuel development, no more subsidies or approvals - no more.”

Event organizers pointed out how the Federal and Provincial Governments are suffering from a lack of imagination in terms of what a future that isn’t reliant on oil & gas looks like; but the ingenuity shown across Toronto today might help plant some ideas in the minds of our leaders. At one event, a Chrystia Freeland look-alike gave a rousing speech, happy to announce the establishment of new, lucrative jobs, in an exciting and viable industry, and encouraging people to apply. At another event, the iconic “Lucy” from the Peanuts offered some common sense advice and answered passerby’s questions from her “Doctor of Just Transition'' booth, handing out prescriptions for research, petitioning, and how to call your MP. Julie Dzerowicz, MP Davenport, attended the action hosted at her office, and thanked attendees for coming and for keeping MPs across Toronto accountable. Each event was held together with the common theme of celebration - with interactive and engaging activities that educated people on the need for Just Transition, without preaching.

With more than 40 communities across Canada hosting similar events, it's clear that Canadians are united by their common concern about the dangers of climate change, and our government's inaction in preventing any further crisis. What’s encouraging is that the Federal Government is finally responding after three years, with Natural Resources Minister Jonathan Wilkinson and Labor Minister Seamus O’Regan Jr. gathering committees and launching another round of consultations on suggested Just Transition legislation. As crucial of a next step as this is, organizers and attendees alike are not likely to wait another three years for this bill to be passed without action. 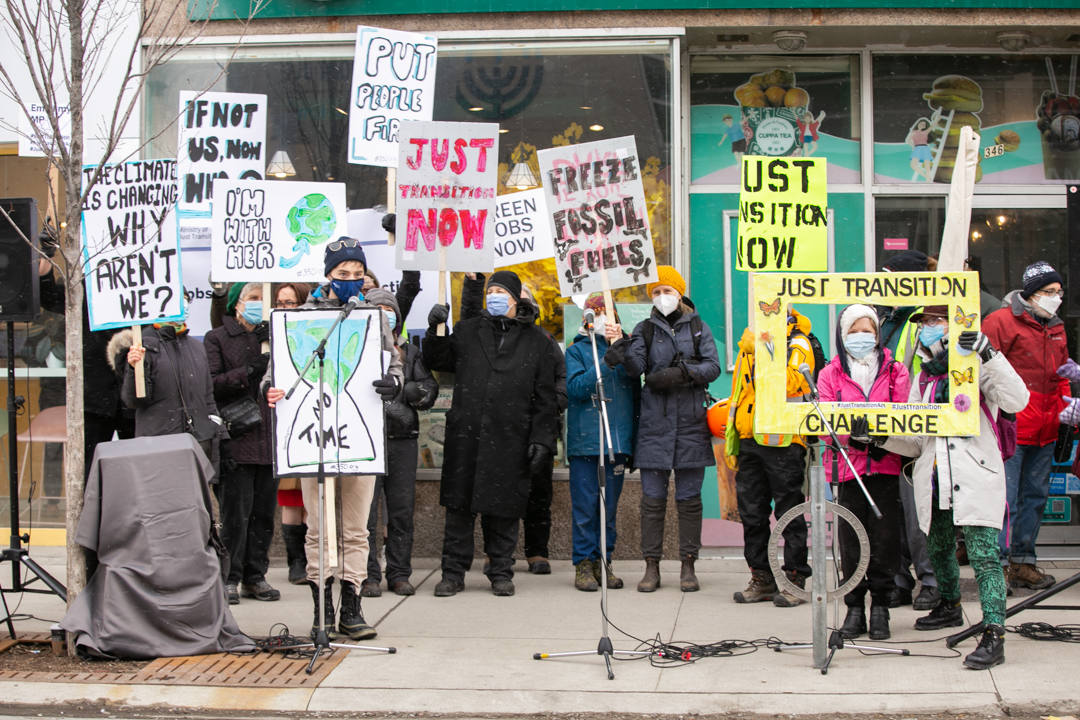 “The Just Transition Act is the most important missing piece of climate legislation in Canada and it needs to pass this sitting of the House of Commons,” said Katie Rae Perfitt, Senior Organizing Specialist with 350.org. “We cannot tackle the climate crisis without rapidly phasing out fossil fuels. Canadians deserve immediate action from our federal government to make that shift happen in a way that puts workers and communities first.” 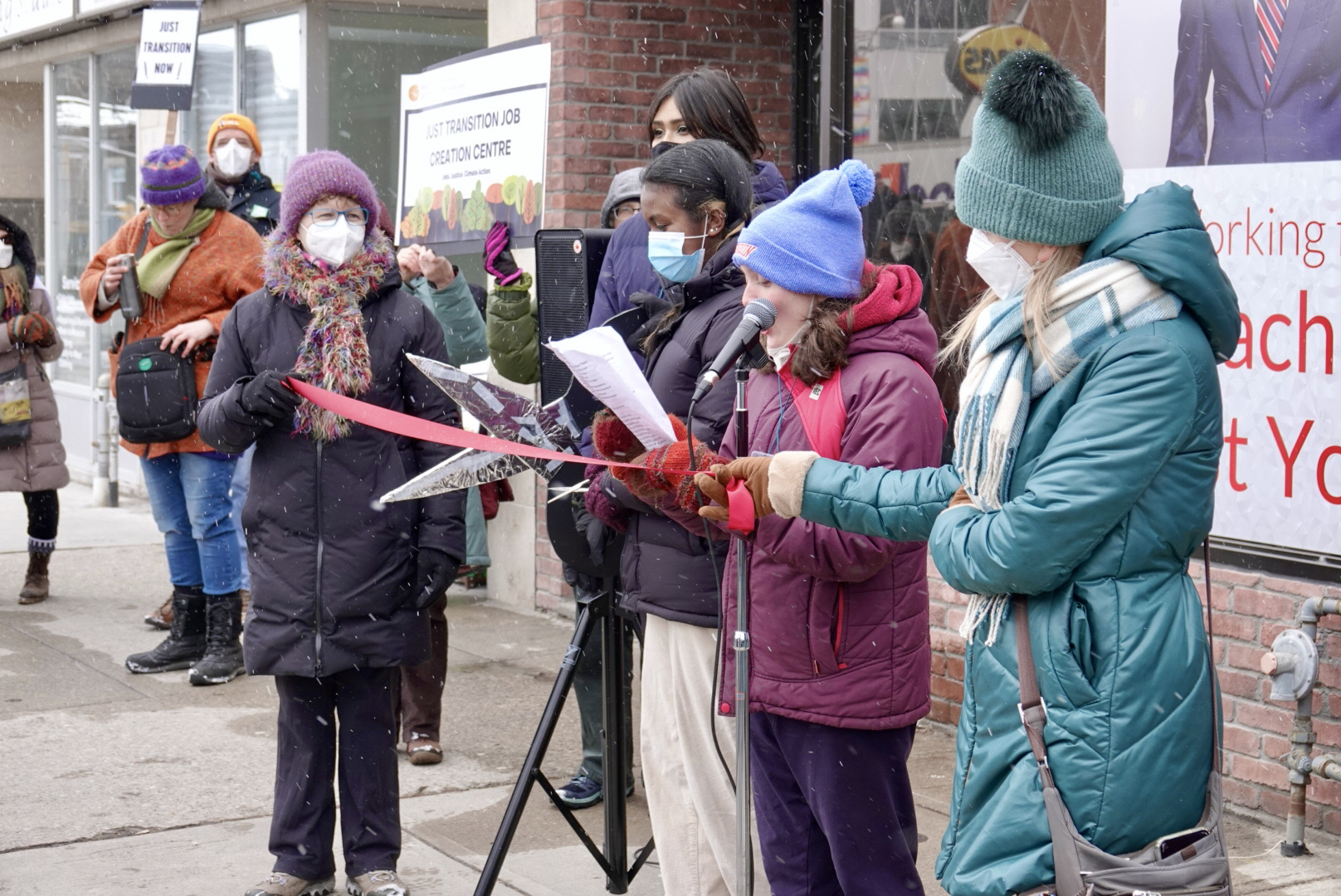 Climatefast believes we need to act on climate fast. We are in a crisis and need coordinated action for deep cuts in carbon emissions. We must end fossil fuel subsidies, put a price on carbon and transition towards renewable energy.

We also engage Canadians through public education events such as our film series, workshops and webcasts, and provide training on making a deputation, writing letters to the editor, speaking with elected representatives and facilitating Kitchen Table Climate Conversations.

Toronto350.org is a local network affiliate of the international 350.org founded by Bill McKibben. We started in June 2012.  Our meetings have moved online since March 2020.

At our planning meetings we work collaboratively to direct the organization and its campaigns.  We give people the opportunity to self-actualize by taking over the direction of a wide range of activities. If the climate crisis and climate justice concerns you, join us!

TEECC is a non-partisan collective of east end Toronto residents who are very concerned about the climate crisis.

We support a transition to creating green jobs, renewable energy and a Just Recovery.  We join in discussion, planning and collective action with community members and politicians.  All ages are welcome. Among our areas of interest are food security, building emission reductions and phasing out Ontario’s gas-fired power plants.

We strive to increase awareness and knowledge of environmental issues then find ways to take action for positive change.