Action at All Levels

Both the provincial and federal levels of government are failing to truly address the emergencies we face. While we have heard relatively progressive words at the federal level, in the Throne Speech and the recent Fall Economic Statement, actions do not support these words. They do not go far enough fast enough. They leave a gaping, industry-sized hole apparent across different legislation and in all current plans.

In fact, Canada is still supporting fossil fuel in a major way. The country ranks worst of the OECD countries in the G20 Scorecard for ending funding for fossil fuels, and the Production Gap Report cites Canada as one of the leading providers of fossil fuel producer subsidies. A loan guarantee was even given to Keystone XL as part of the COVID recovery package! 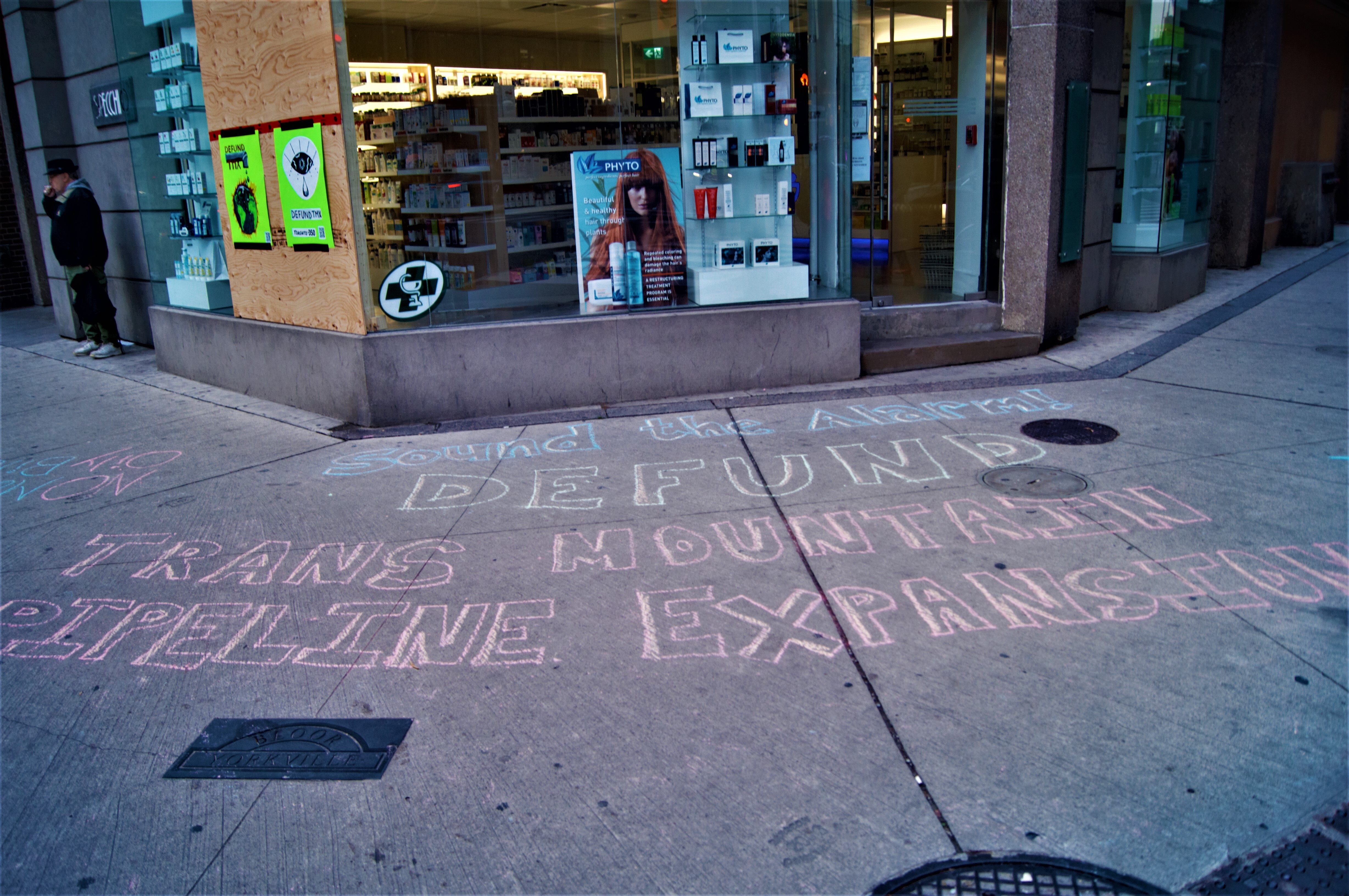 In the recent Climate Change Performance Index, Canada ranks near the bottom as well, coming in just before Iran, Saudi Arabia and the US. Reasons for this infamy include a gap between climate goals and implementation, considerable financial support given to fossil fuel producers and a weak 2030 emission reduction target. Our country is still protecting a system where extreme wealth imbalance and harmful colonial practises dominate. 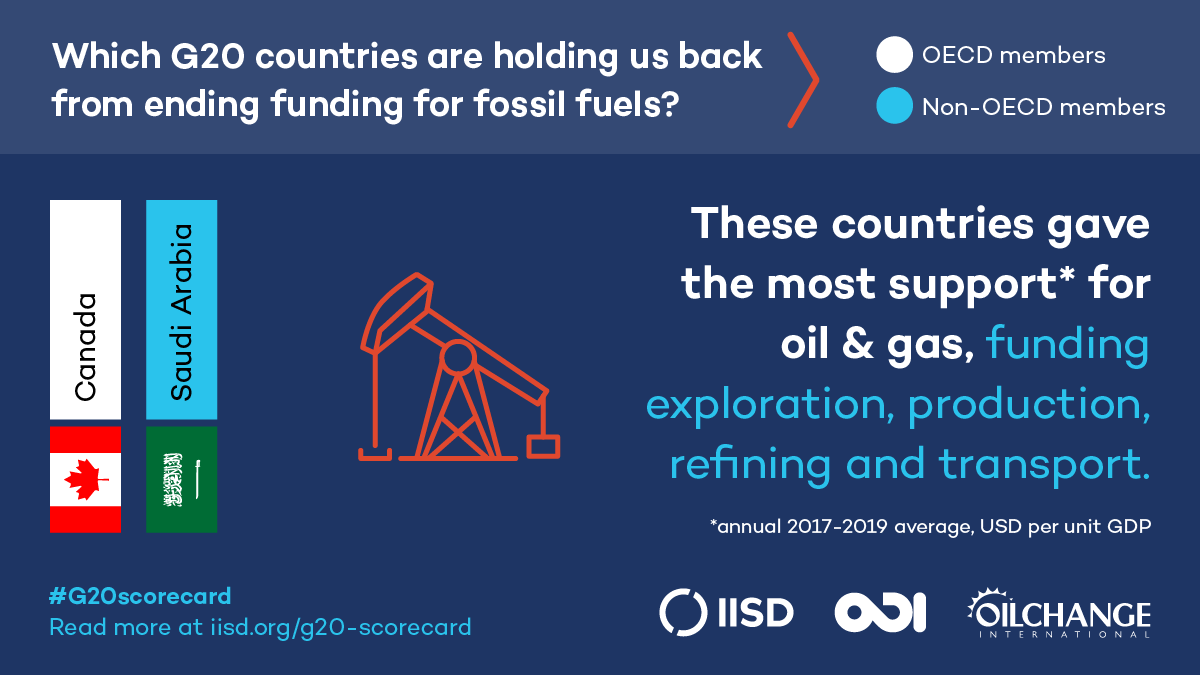 At the same time, as the Production Gap Report shows, Canada is capable of taking steps to wind-down fossil fuels, like the $2.47 billion given for cleaning up oil and gas wells and an end to financing new thermal coal mines. Canada is also more equipped to make a just transition than most other countries, having a comparatively small GDP and job dependence on fossil fuels and more economic diversity.

It is quite significant to note that our own energy regulator and Parliamentary Budget Officer's reports underline the fact that we cannot continue building or supporting fossil fuel infrastructure as planned and come anywhere close to meeting climate goals. We need to use the precious time and resources we have to get on with constructing the better, more equitable, and livable future that is still possible.

To push for this urgent redirection, TO350 members were on the ground, participating in socially distanced and COVID-19 appropriate demonstrations over the last few weeks. 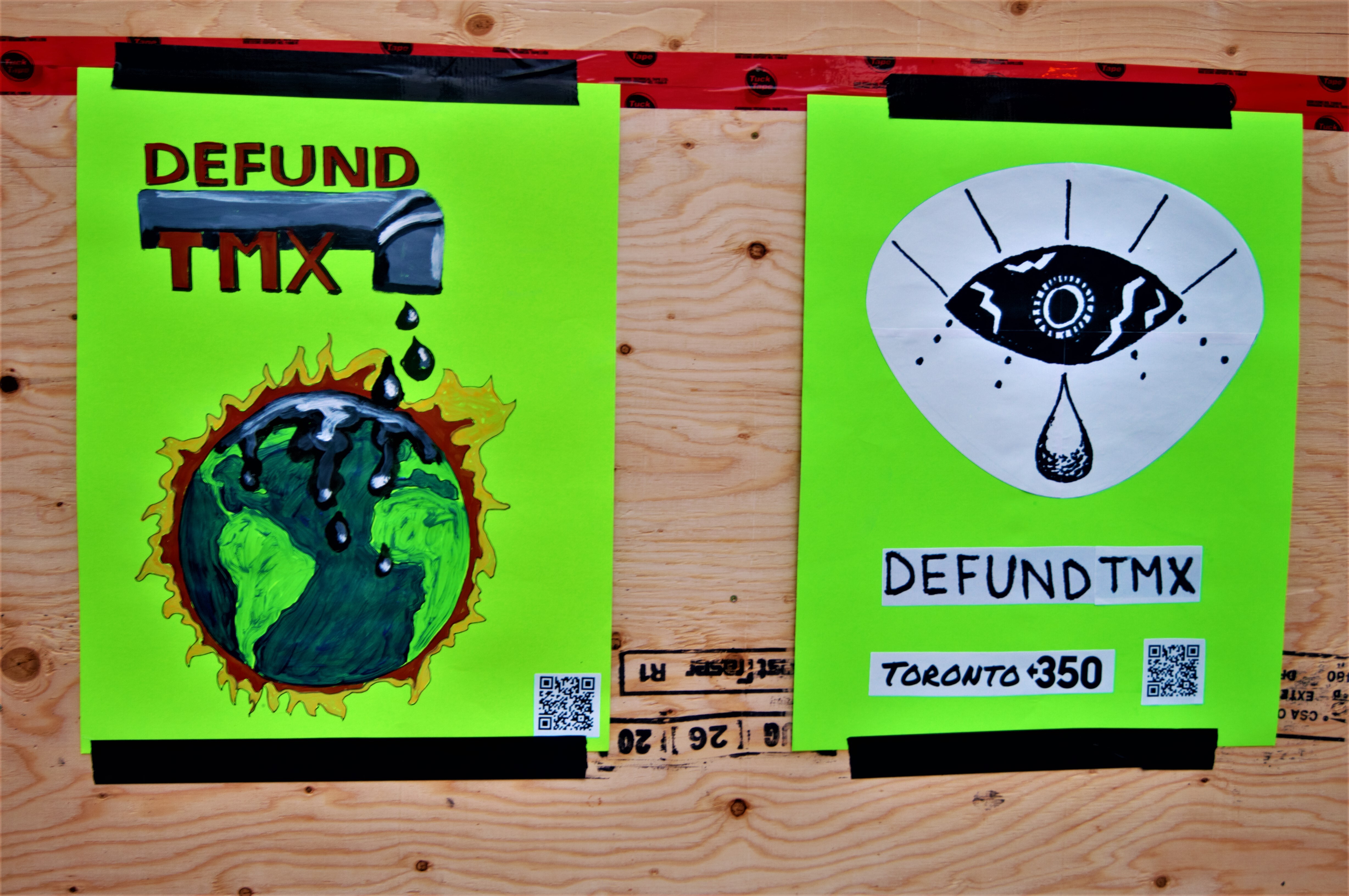 The first was the Sound the Alarm #DefundTMX rally, held at dawn on November 17, just as the Trans Mountain crown corporation’s annual general meeting began. As the press release noted, “[p]eople all across the world have been waking up to alarms, health warnings and evacuation alerts because of wildfires, storms, flooding and dangerous air quality. They couldn't ignore the climate crisis and neither should our politicians.”

Gryphen, one attendee described the event, saying,"It was cold and dark in the early morning but people’s spirits at the action were warm and bright. Everyone was out there with a single goal of holding our leaders to the climate promises they ran on. Instead of investing in a greener future, they bought a pipeline and they continue to fund it with our tax dollars. That gets my spirits fired up, knowing my tax money is going into a planet killing pipeline while COVID is causing so much damage ongoing.” 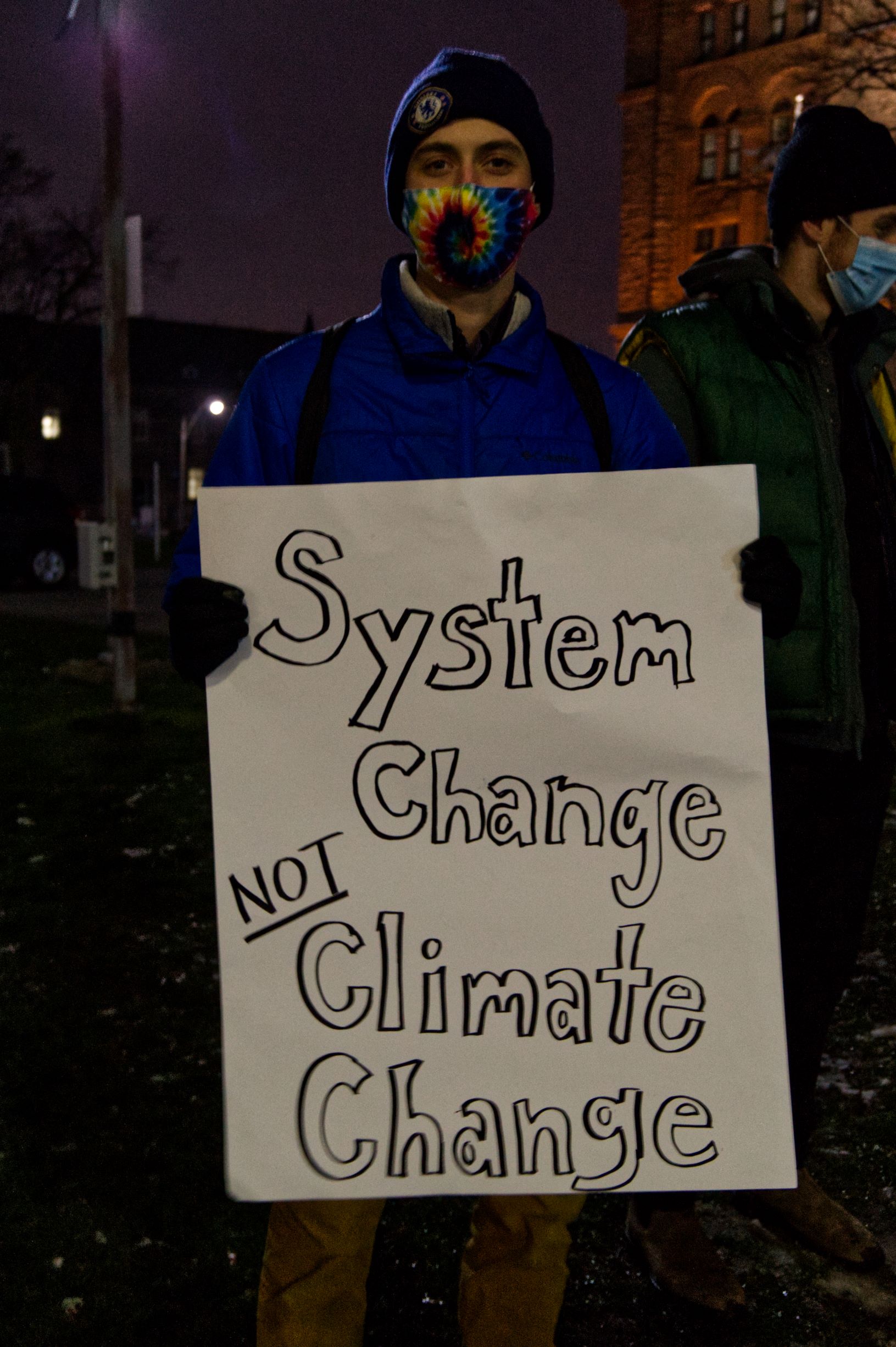 At least $4.5 billion tax dollars so far, in fact. This amount is expected to be closer to $11.5 billion in the end. All that for a pipeline that runs roughshod over Indigenous rights. Currently, according to Dogwood, Holmes Creek camp was destroyed by private armed security, and logging crews are set to cut down the cottonwood trees by a salmon stream, risking the eggs waiting to hatch. It was sworn under oath by Trans Mountain vice president that these trees would not be cut at this time of year.

You can also check in with our Throne Speech Report Card followup for details about federal level action. A post federal climate plan announcement and Fall Economic Statement update to follow shortly! 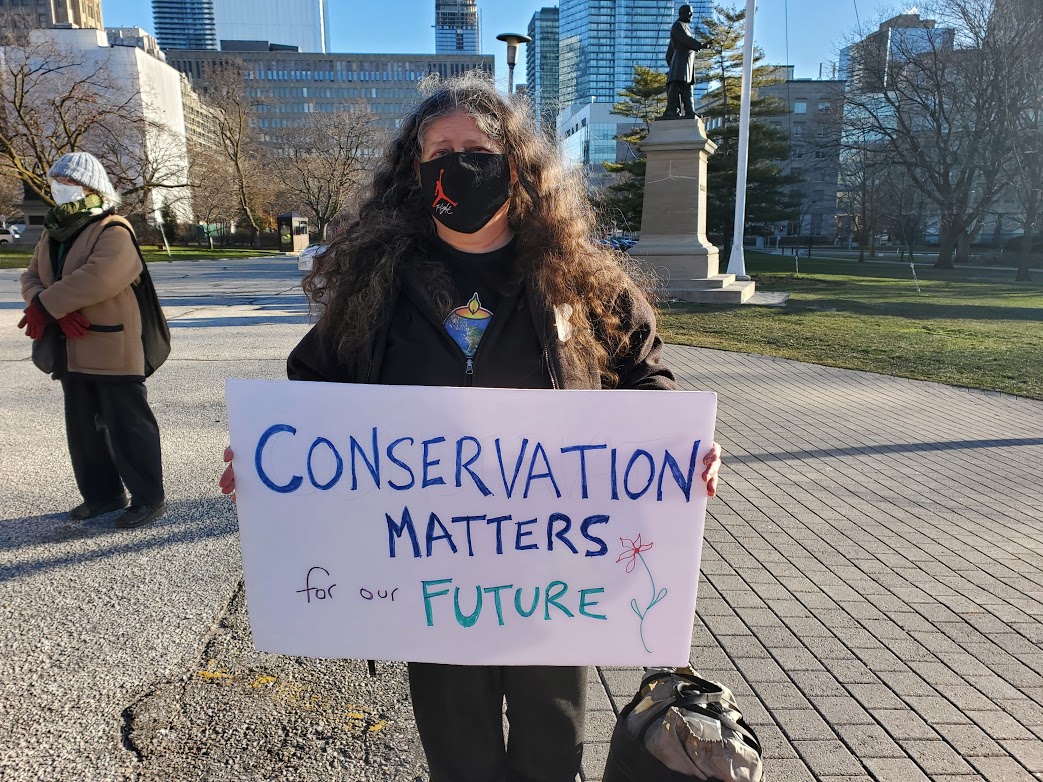 On the provincial level, many are heartbroken to see the changes slipped into Budget Bill 229, under Schedule 6 and Schedule 8, that jeopardize our conservation areas, watershed management and forests. More than 50,000 messages were sent to express opposition to the changes that will put flood control and other vital natural systems at risk. These Schedules essentially over-ride the ability for environmental concerns to be brought to the forefront, including the Endangered Species Act and the right for conservation areas to withhold permits, paving the way for more development.

As Katie Krelove said in the press release for a demonstration jointly organized by ClimateFast and the Wilderness Committee held at Queen’s Park on December 8, “These changes are merely the latest in a long line of attacks on environmental protections by the Conservative government, all in the name of ‘cutting red tape’.  They are pandering to big developers and industry at the expense of the health and safety of everyone else.” 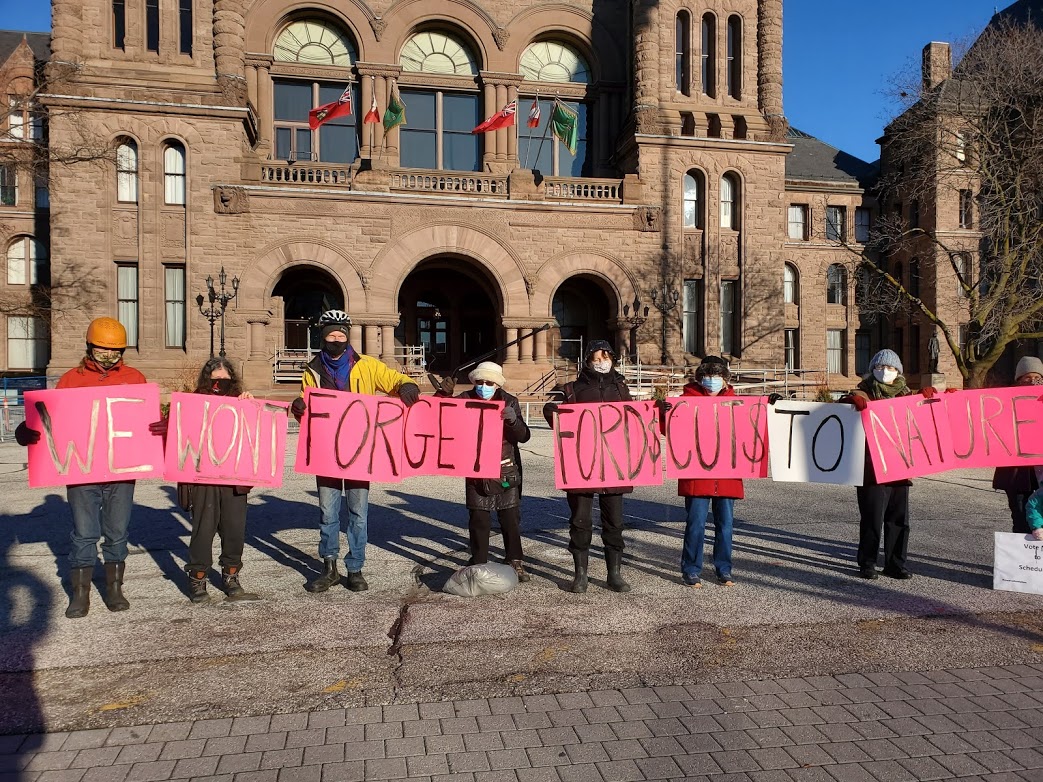 As far as I can see, existing inequitable power dynamics are reinforced with this move with developers and elected officials given more power while the public and conservation authorities lose a great deal of the limited power they already possess.

Many regional municipalities themselves, like Hamilton and Halton, and varied groups that represent peoples’ interests, like the Ontario Federation of Agriculture and the seven members of the Greenbelt Council who resigned, see the adoption of these schedules as a real loss, a shift away from the goal of protecting our environment. All of this at a time when COVID-19 is showing us how intricately our health and wellbeing is tied to nature and community. A time when we see, more than ever, how important it is to protect one another and the things we truly need and value. 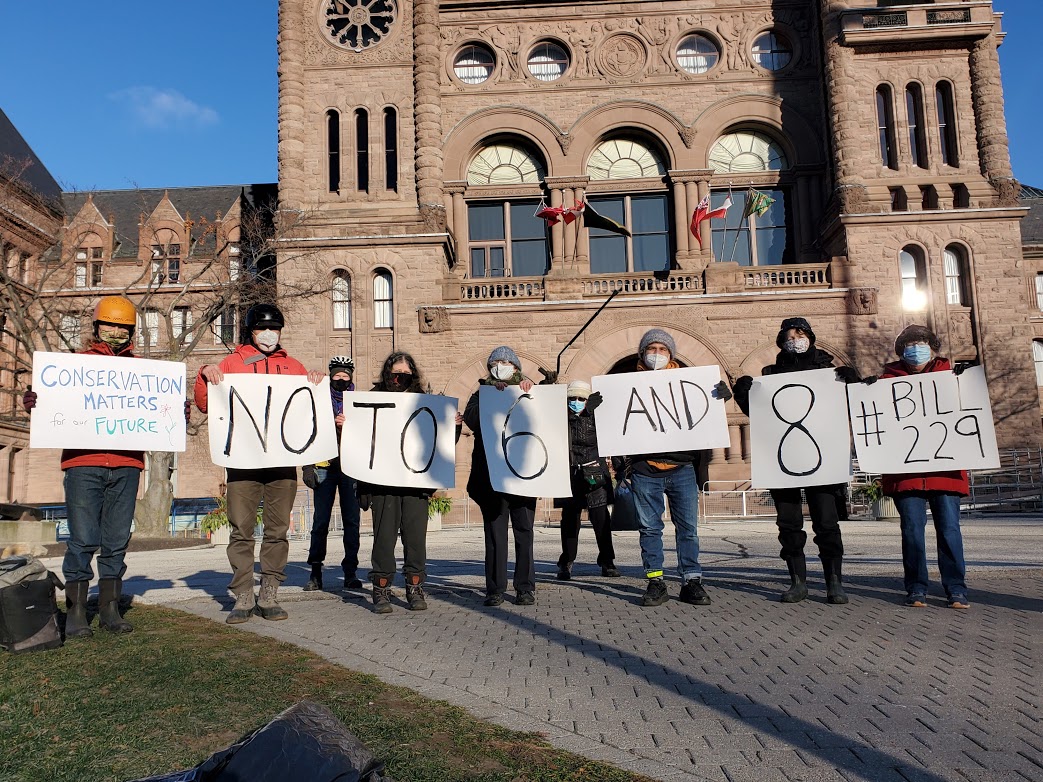 These Schedules are also tied in a very real way to the mandate at the Ontario level to increase natural gas infrastructure. Enbridge, in part because of the Hamilton Conservation Authority and the concern of local citizens like those in Hamilton350, recently did not continue with an application to build a pipeline through Beverly Swamp. And now, with Bill 229’s changes, projects like the one threatening Duffins Creek, an important wetland, are all too likely to increase.

As Sharon, one attendee at the rally put it, “The Ontario public will not forget this.  It is a betrayal of future generations.” Here she is with her granddaughter, who she is fighting for. Quoting the press release, we need to “keep up the fight for a true green recovery that protects natural ecosystems.” 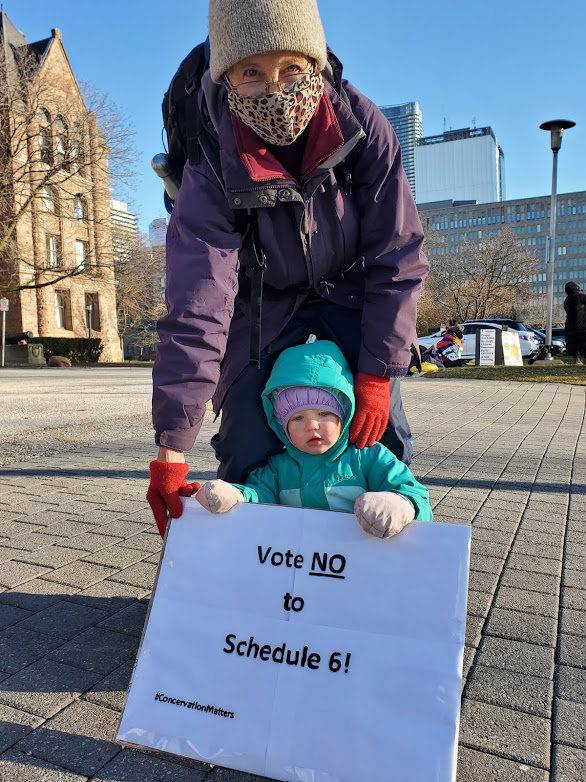 A third COVID compliant demonstration spearheaded by Fridays for Future, #Fightfor1Point5, took place the next day, on December 9th, also at Queen’s Park. On the 5th anniversary of the Paris Agreement, the youth-led campaign calls out the fact that our leaders are not taking the actions needed to maintain a livable future for all. It demands accelerated actions to keep global temperature rise down.

Toronto350 showed up to support the initiative that includes a promise, in the face of mounting catastrophes, to demand change and accountability, to fight for the world we want and action that exceeds net-zero by 2050 which, to quote the promise itself, is “a death sentence for many.”(1) The promise elaborates, saying that the “transition does not just have to be faster, but also fairer - for the many, and not the few. We cannot go back to normal. Normality was already a crisis - a crisis of inequality, destruction of nature, and climate.”(1) It is a promise to keep fighting to create and safeguard a just and green world for all now and into the future. 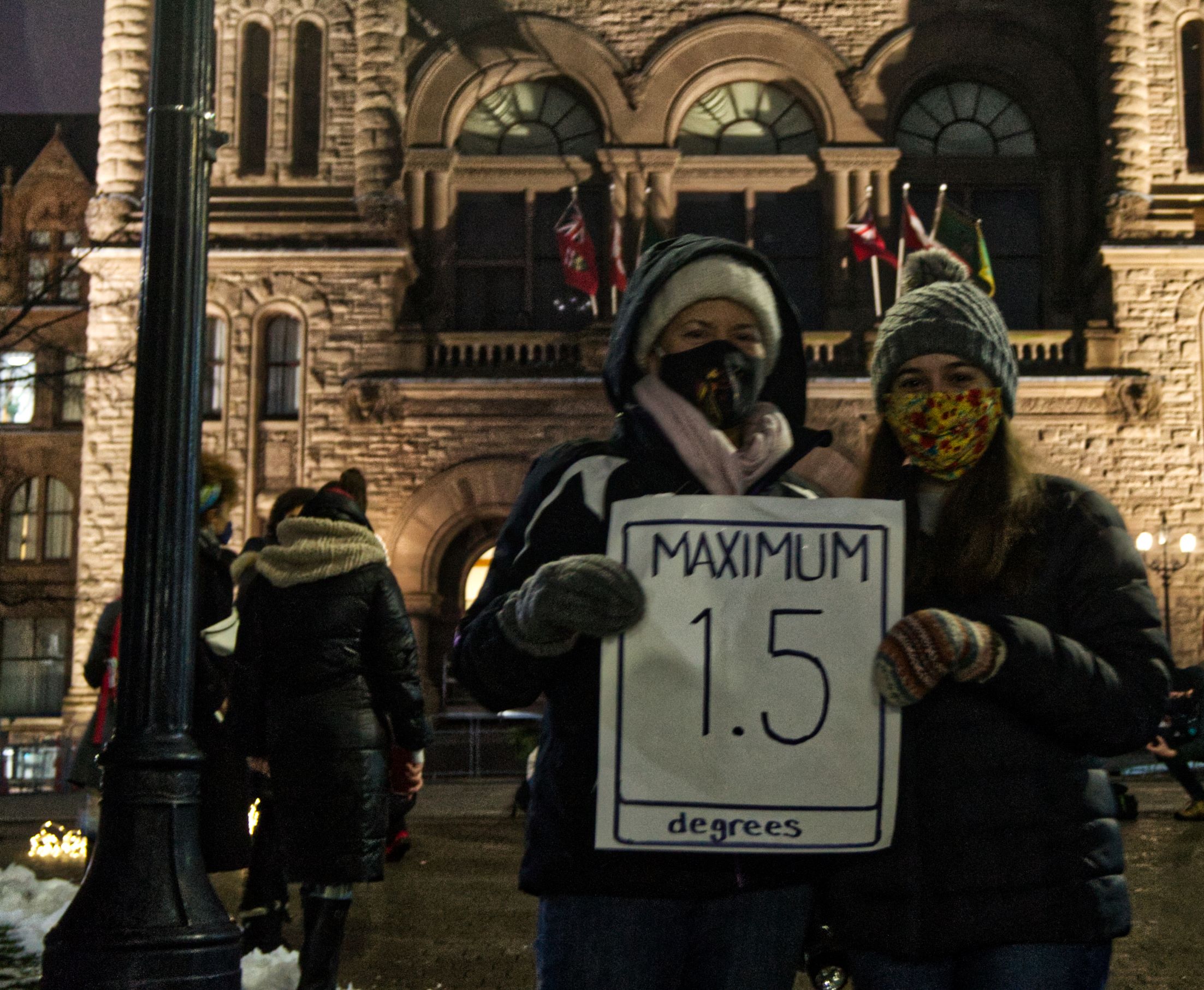 In Toronto, the importance of a strong Climate Accountability Act was also highlighted. See EcoJustice, Canada350, and Climate Action Network's recommendations for what needs to improve, attend a letter writing party on Sunday 13th at 7pm and stay tuned for more action opportunities in the New Year. If we get this Act right, we will be a lot closer to patching the holes in our current plans!

The Climate Strike Canada youth’s submission to Mock Cop 26, in the December 1st DECLARATION OF MOCK CONFERENCE OF THE PARTIES 26, tasks government to reach or exceed 2020 and 2030 emission targets, to listen to the science, and treat the climate crisis as the emergency it is.

Toronto350 wholeheartedly supports the ideas detailed in the submission, including the implementation of a Green New Deal, aptly described as “a rapid, inclusive, and far-reaching transition to slash emissions, meet the demands of the crises we face, respect the rights of Indigenous peoples, and create over 1 million green jobs.”(2) Closely tied to this demand is one for a #JustRecoveryforAll, a response to COVID-19 that kick-starts the transition to a just, green and healthy future for everyone. 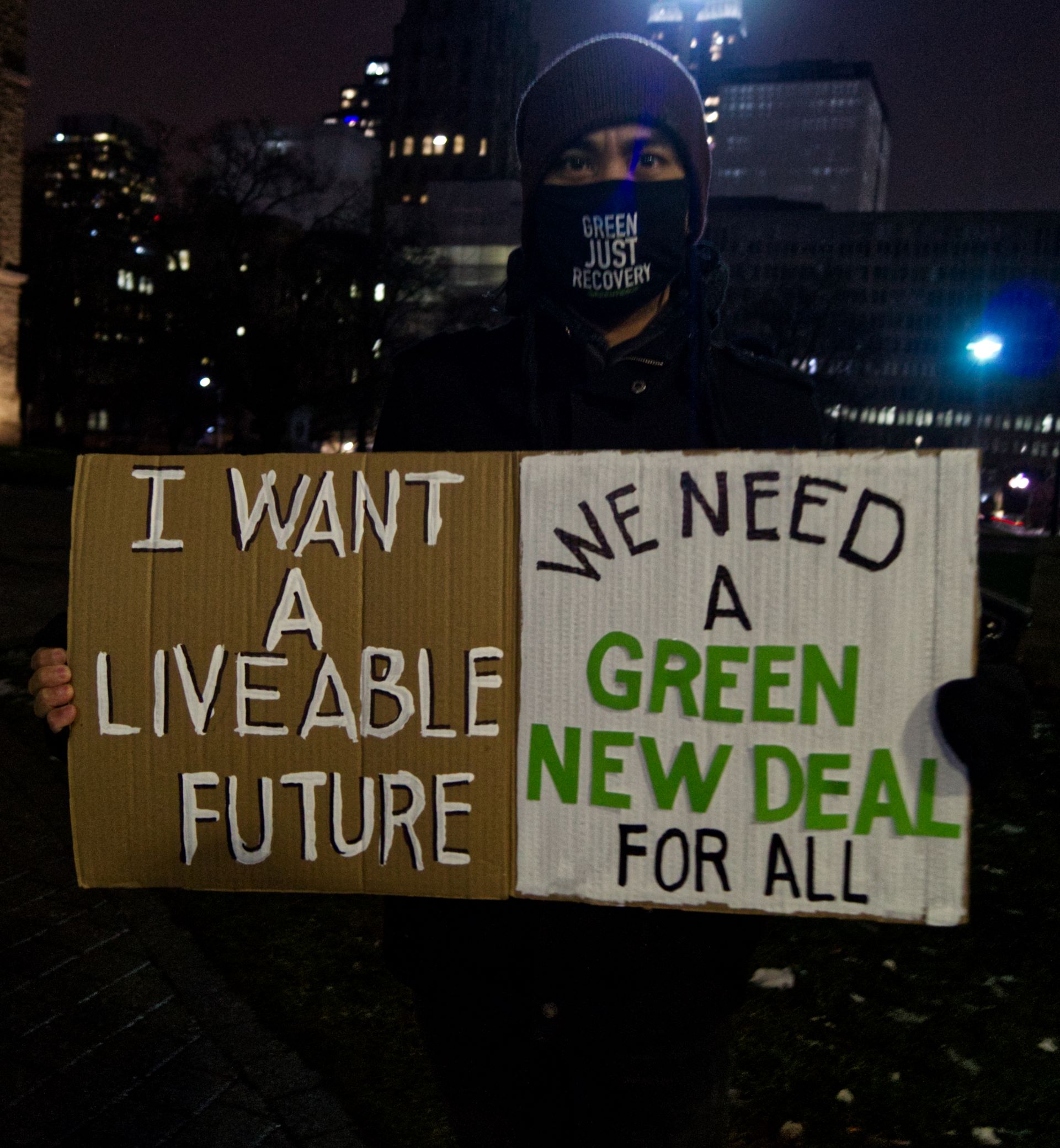 Their other demands are also vital for the societal transformation we need now. They include an immediate end to fossil fuel subsidies and a rapid phase out of fossil fuels, honouring the United Nations Declaration of the Rights of Indigenous Peoples, including the right to free, prior, and informed consent, and the implementation of an Ecocide law that effectively makes it a criminal act for corporations to engage in destructive practises and override policies that protect the climate and nature. On all of these points, Canada is failing right now. This must change!

I also want to highlight the demand for climate education that acknowledges the truth about the future and addresses climate-related mental health issues. We cannot let the truth hide in the shadows. We cannot let those threatened by climate impacts go unheeded. It is vital that we keep resisting, raising awareness and uniting in public outcry. Onward into 2021 together! 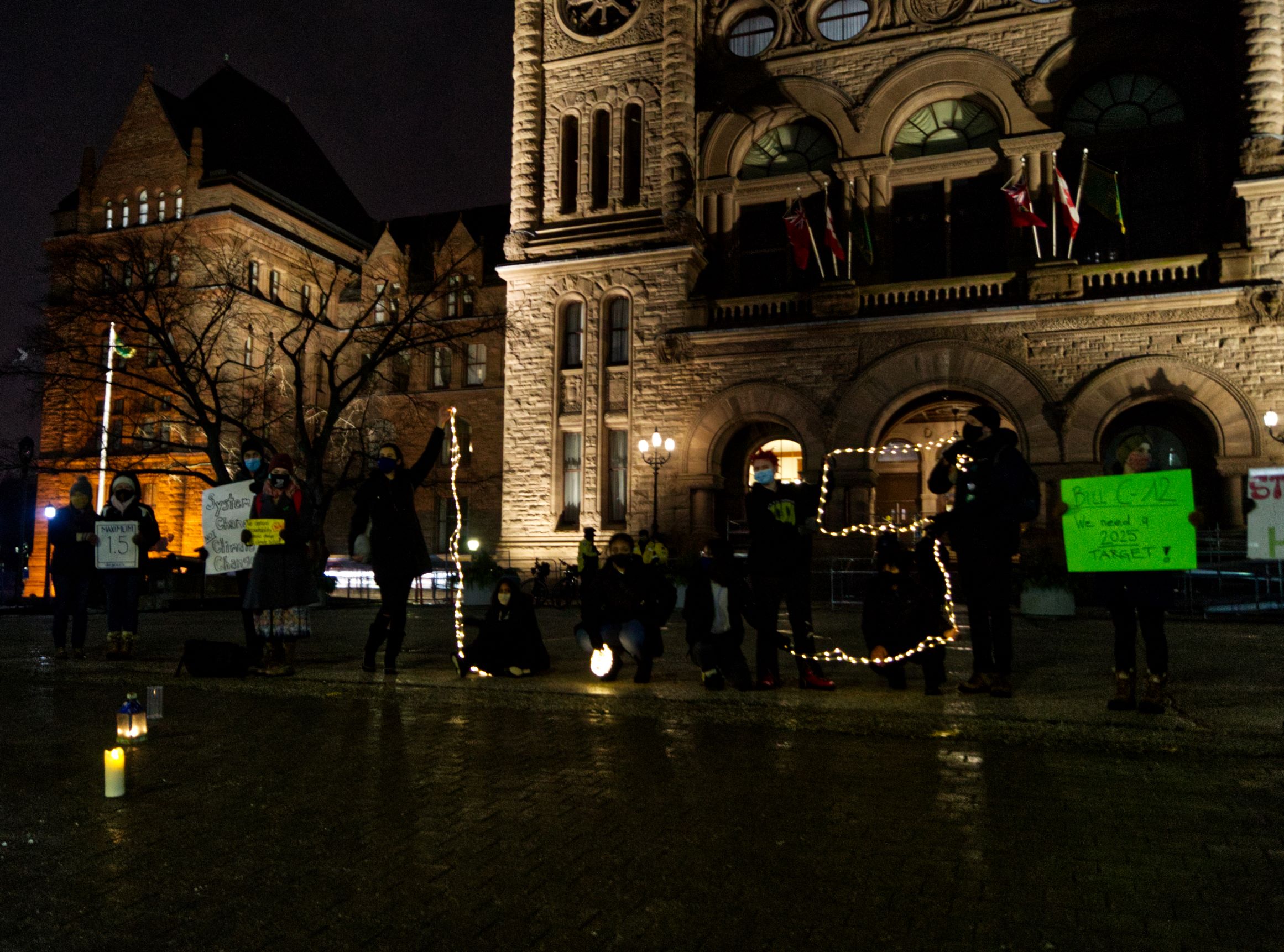 (1)The Fight for 1 point 5 Promise, fridaysforfuture.org.