Finale: At COP 27, The World Called Out for Climate Justice 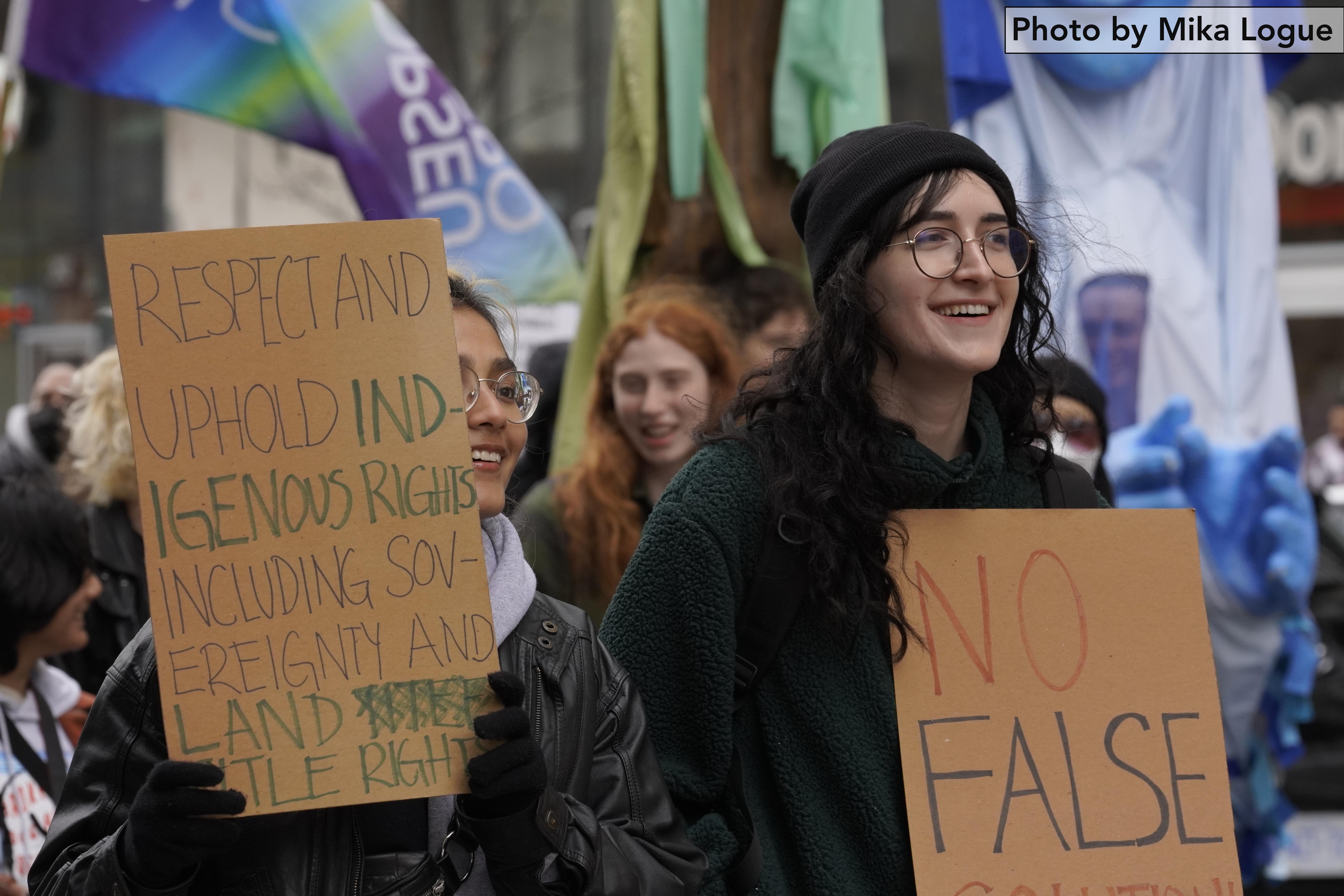 (Finale to the story about the November 12th COP 27 Global Climate Justice rally in Toronto.)

Next the marchers stopped at the offices of CDEV, the crown corporation that bought the sinking Titanic of a pipeline, TMX. In fact, in a report from Climate Change Performance Index that came out during COP, Canada ranked #58 lowest of 63. One of the main reasons cited is the high level of oil and gas production. All the while Canada poses as a climate leader!

A just transition does not include continued Indigenous rights violations and false solutions like blue hydrogen (fossil fuel production with methane and massive storage of carbon). It means reducing emissions now, directly, and putting those investment dollars into renewables and public programs that protect communities as we transition.

Atlas urged Canada to move away from “the idea that tech innovation and capitalist market-based solutions will save us from the climate emergency,” calling it a “fairytale” and ”nothing but greenwashing” and underlined the fact that “[e]xpecting that the very system that created this crisis in the first place will mitigate it” is highly unwise to say the least!

Aiming for “net zero” instead of real emissions reductions, prolongs fossil fuel production and delays a fair transition to a healthier, more sustainable society. As well, the use of land-based offsets endangers Indigenous communities and intact ecosystems worldwide. 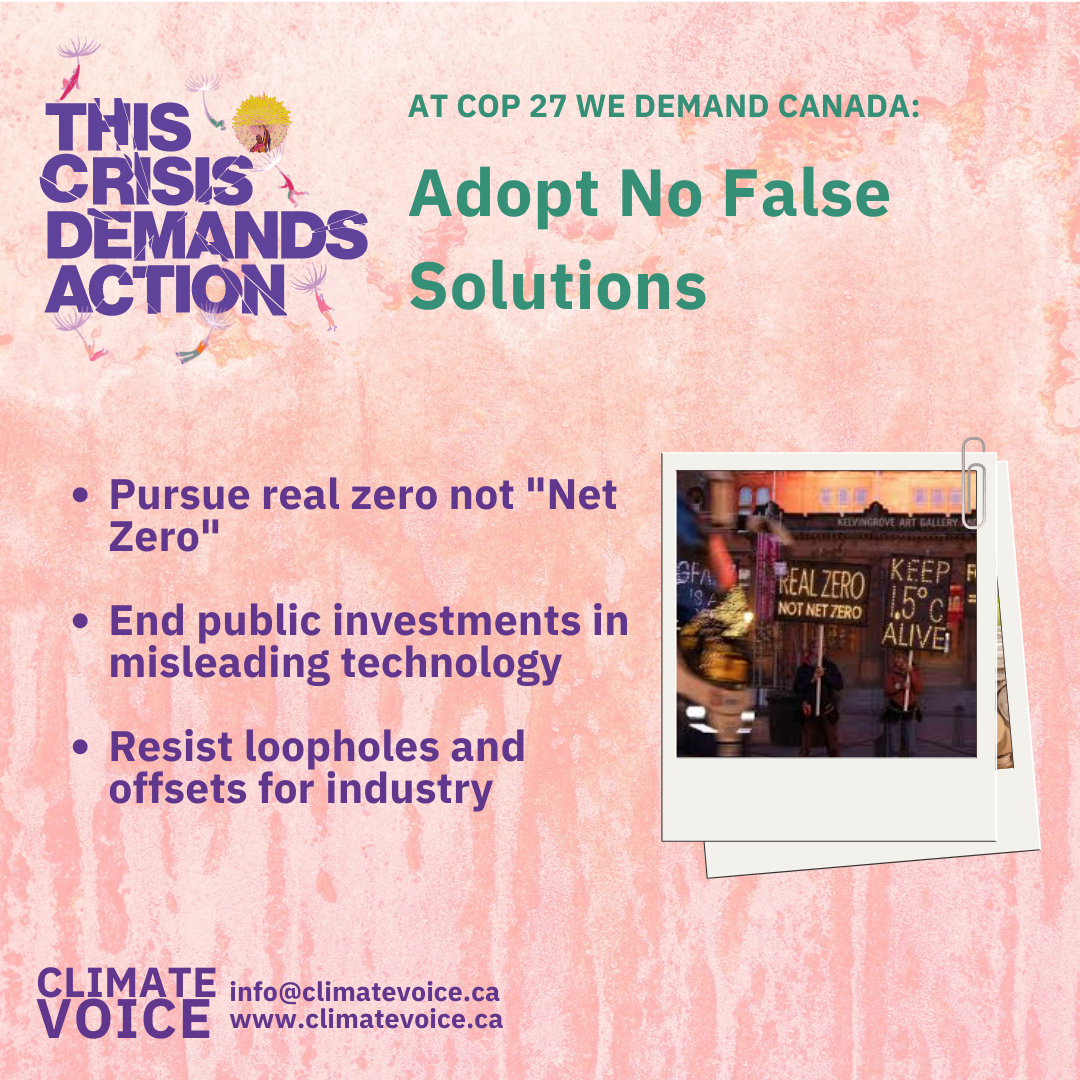 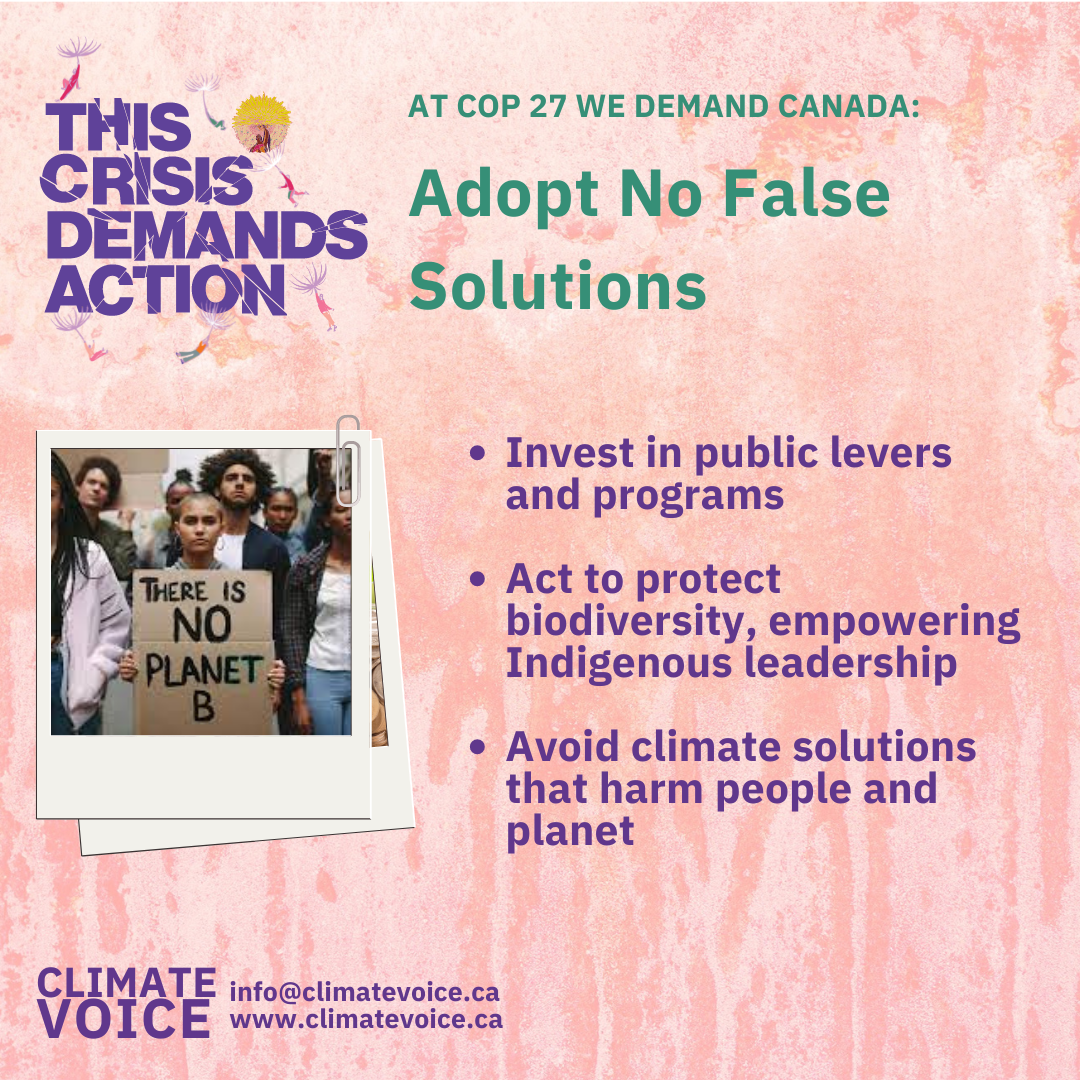 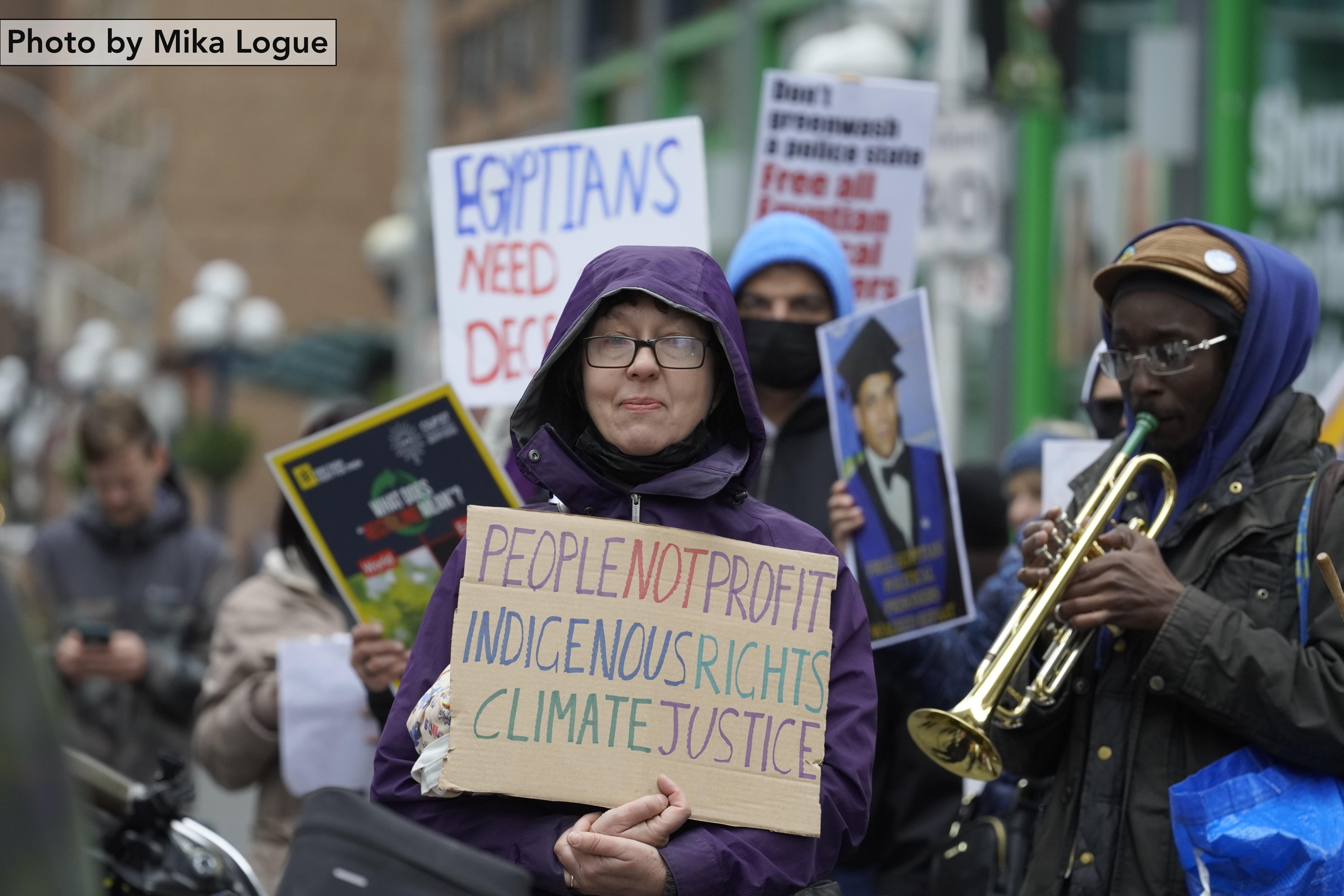 and its man camps….”

She explained that 550 pipeline workers are located in the man camp there and that “[t]hese man camps increase the violence against Indigenous women. As you know, there is an epidemic here in so-called Canada with our murdered and missing Indigenous women and girls and this industry is connected to it.”

She said, “[w]e want to stand in solidarity with everyone today as we target CDEV, the crown corporation that purchased the trans mountain pipeline and now owns it and is pushing it through my territory…..we’ve never given our consent for this and we’ve been continuing to resist this pipeline expansion project which really is a devastation to our home lands.”

“They want to pump 890,000 barrels of bitumen, diluted bitumen from the Alberta tar sands, though these pipes, though my homeland, through the mountain, all the way to …the coast and they want to pump that into massive…supertankers that will be destined to Richmond California oil refineries.…So this Trans Mountain that Canada has purchased is part of a bigger, global energy project that really affects Indigenous people all throughout the corridor….” 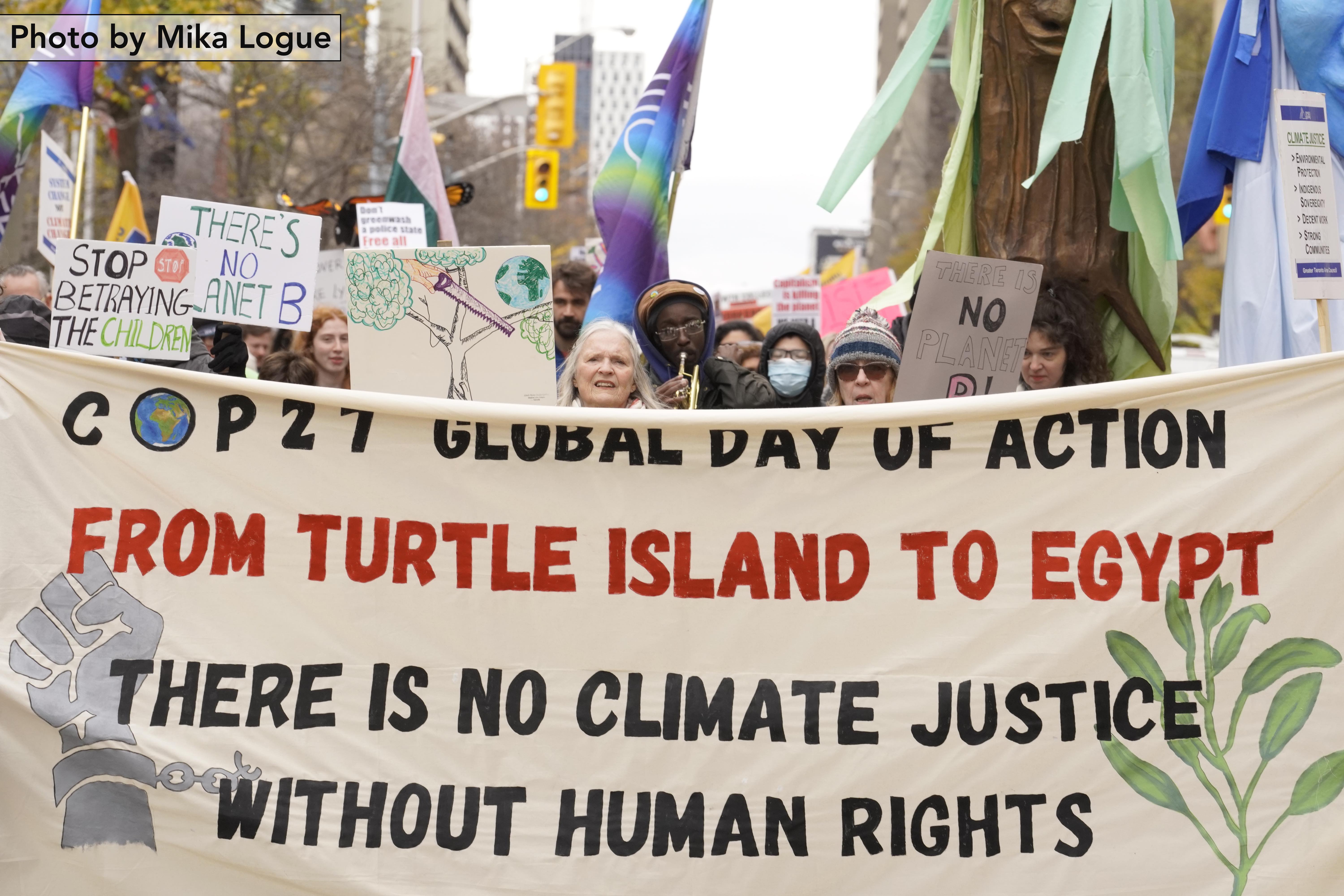 The peaceful, mobile rally continued eastward to Yonge and Bloor, right through the heart of the financial district, the beautiful banner reading “from Egypt to Turtle Island,” leading the way, calling for a just transition away from oil and gas, calling for Indigenous and human rights.

“Wall Street, Bay Street, Listen, Listen Up. The planet is dying, start to give a —.”

“We are unstoppable, another world is possible” we chanted. “Sisi’s regime has got to go…fossil fuels have got to go.”

The crowd came to rest at its final stop, the RBC at Yonge and Bloor. RBC is Canada’s biggest financier of fossil fuel projects across the country and the fifth largest in the world. They’ve given over $260 billion in fossil fuel funding since the Paris Climate agreement and what’s more, are under investigation for allegations of greenwashing and misleading advertising. 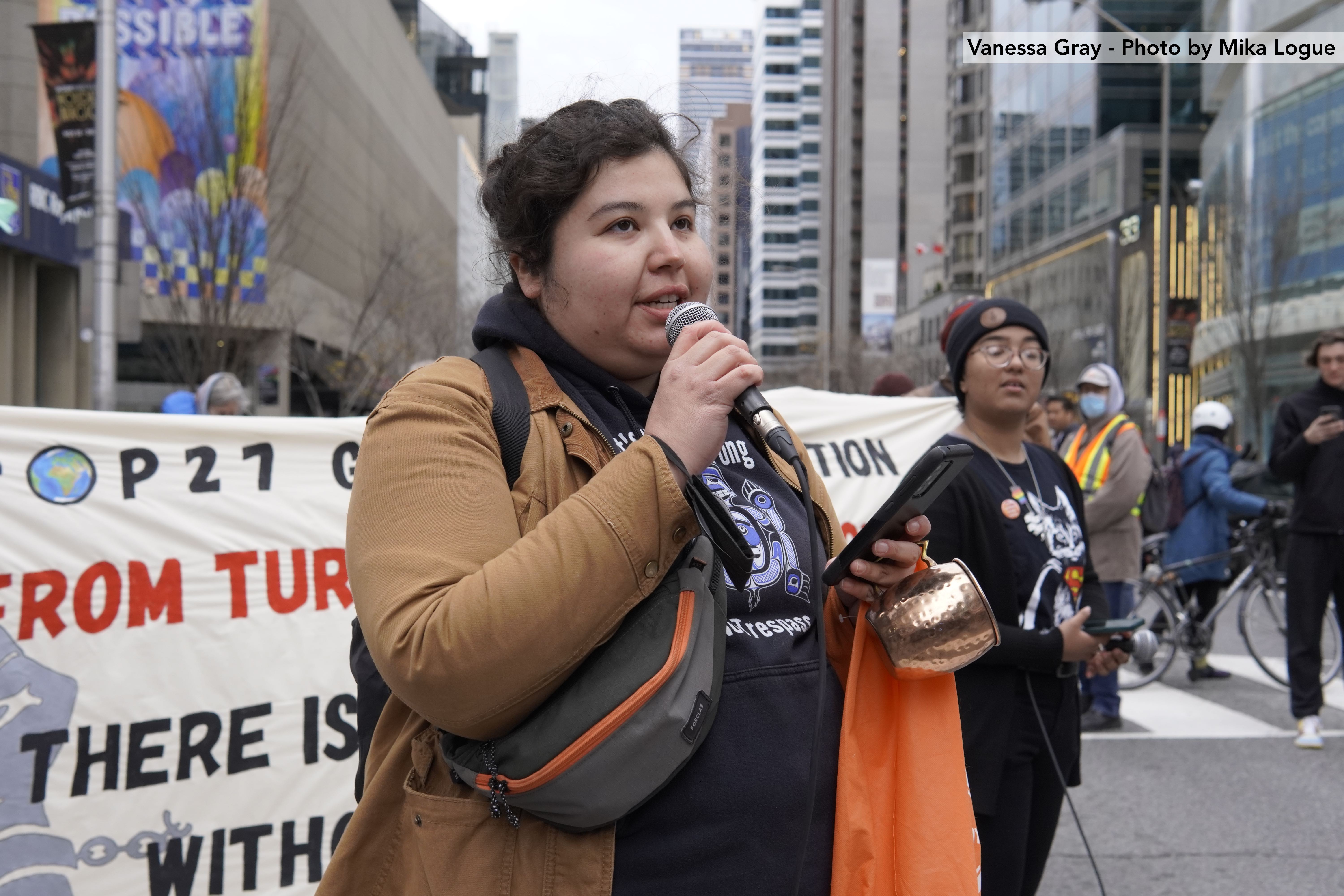 On the west coast, in Wet’suwet’en territory, RBC is funding the Coastal GasLink Pipeline. The corporation drills under the Wedzin Kwa river, enacting government sanctioned Indigenous rights violations. This attempt to transport more oil and gas contradicts any COP 27 commitments. Instead, with the leadership of Indigenous Nations around the world, this country must stop its extractive mandates and prioritize human rights, including a healthy environment.

Vanessa Gray, Anishinaabe Kwe from the Aamjiwnaang First Nation spoke to these points, saying she was “here today on behalf of Indigenous Climate Action to stand in solidarity with the Indigenous Nations represented at COP 27. Indigenous people play a sacred role in taking care of the land and upholding our traditions that rely on a healthy environment.”

“While world leaders decide our fate at the UN International Climate Conference, our Nations on the ground are facing this crisis. Our voices must be heard by the Canadian government and world leaders globally to address the climate crisis now.”

Bringing it back to where we stood, in the financial district, she declared, “[n]o amount of RBC’s corporate greenwashing will lower emissions or protect our water. RBC must immediately withdraw financing for all projects that do not have Free, Prior and Informed consent in line with United Nations Declaration on the Rights of Indigenous Peoples. If we want to invest in our future we must divest from fossil fuels. Our movements, our communities, our Nations depend on each other.”

Across the country and worldwide, Indigenous Peoples face the legacy of colonialism and ongoing rights violations in the name of extractive projects and corporate interests. 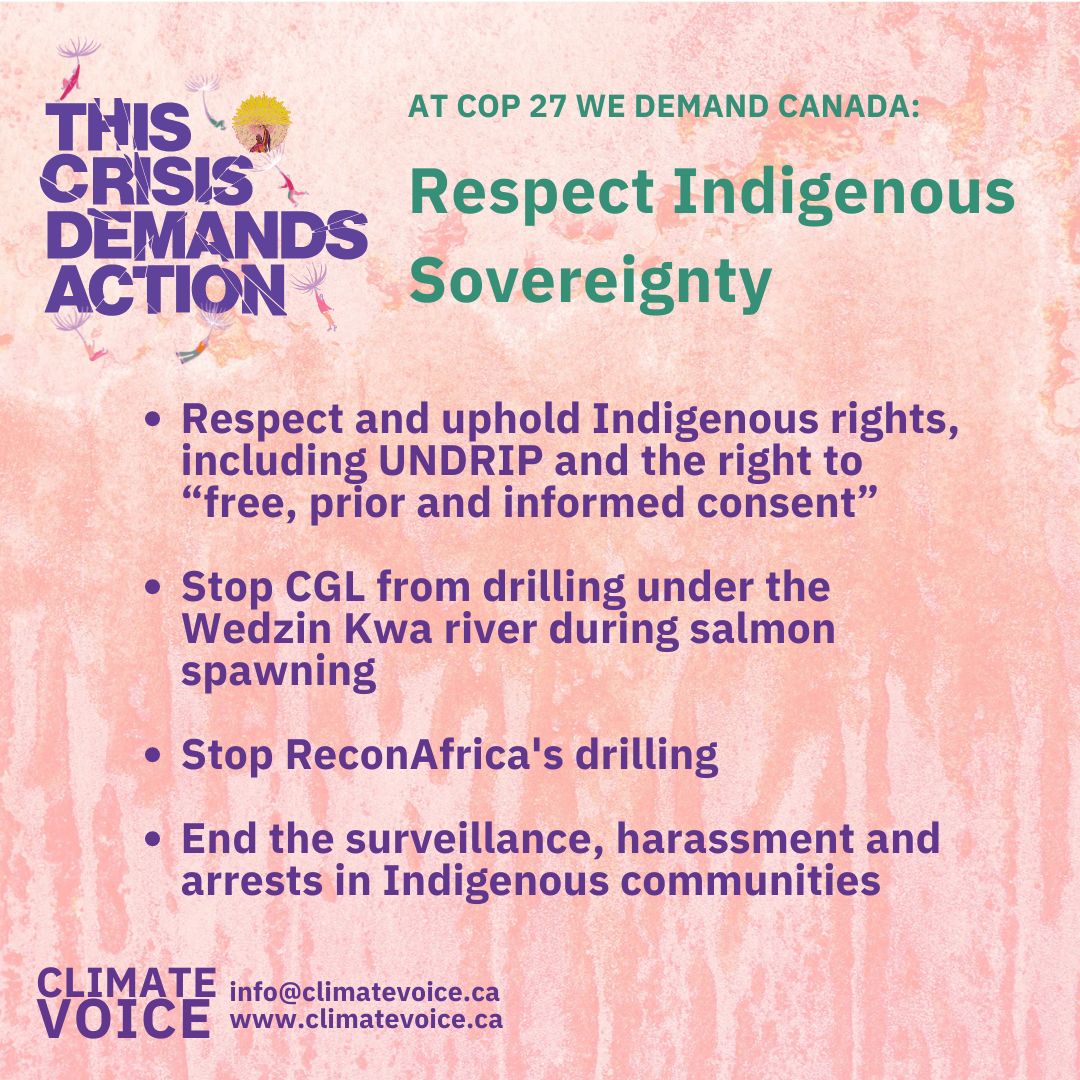 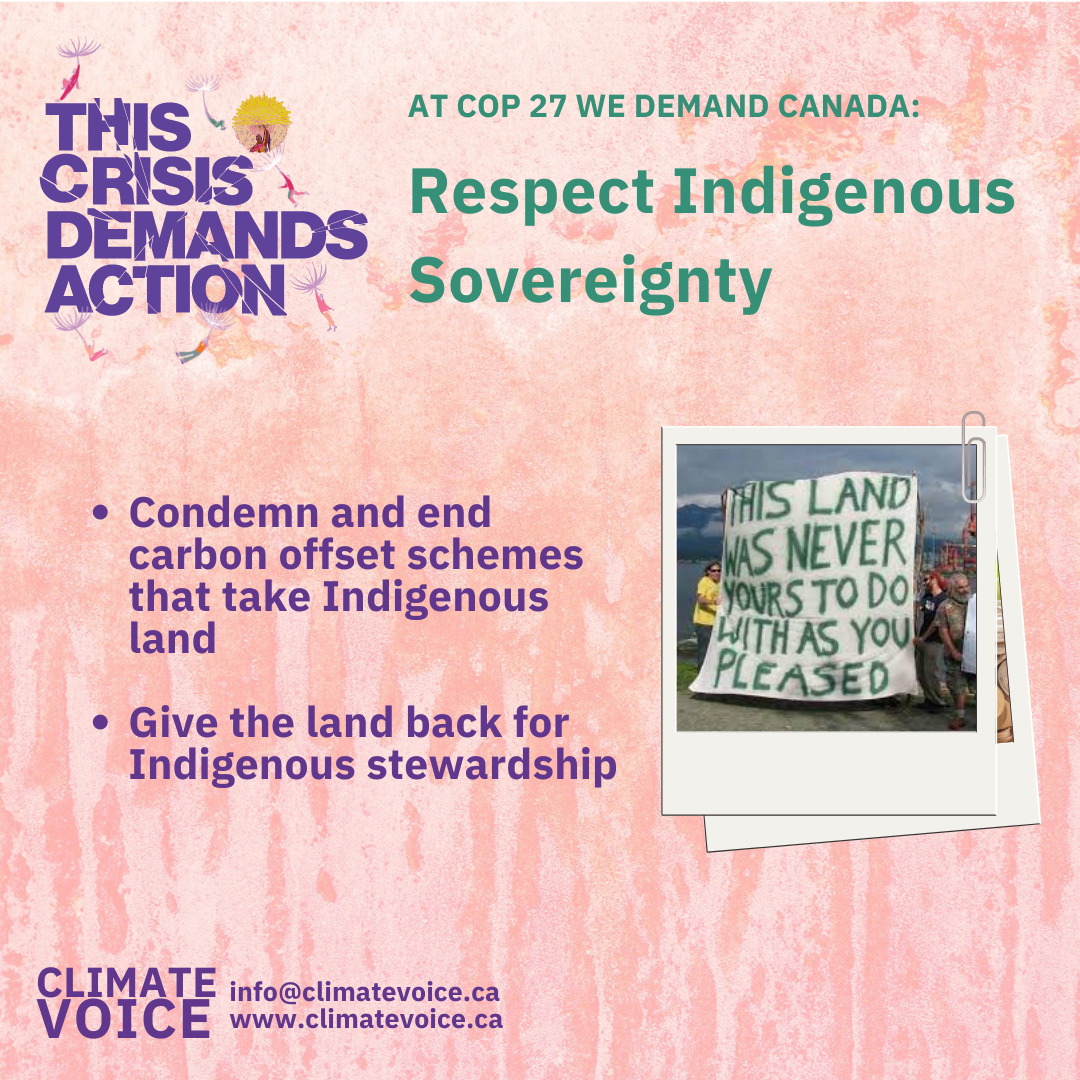 Eve Saint, Muskegowuk, Wet’suwet’en, the last to speak at the rally, acknowledged that the Wet’suwet’en people had lost hereditary chief Dinï ze’ Madeek, and were in mourning, 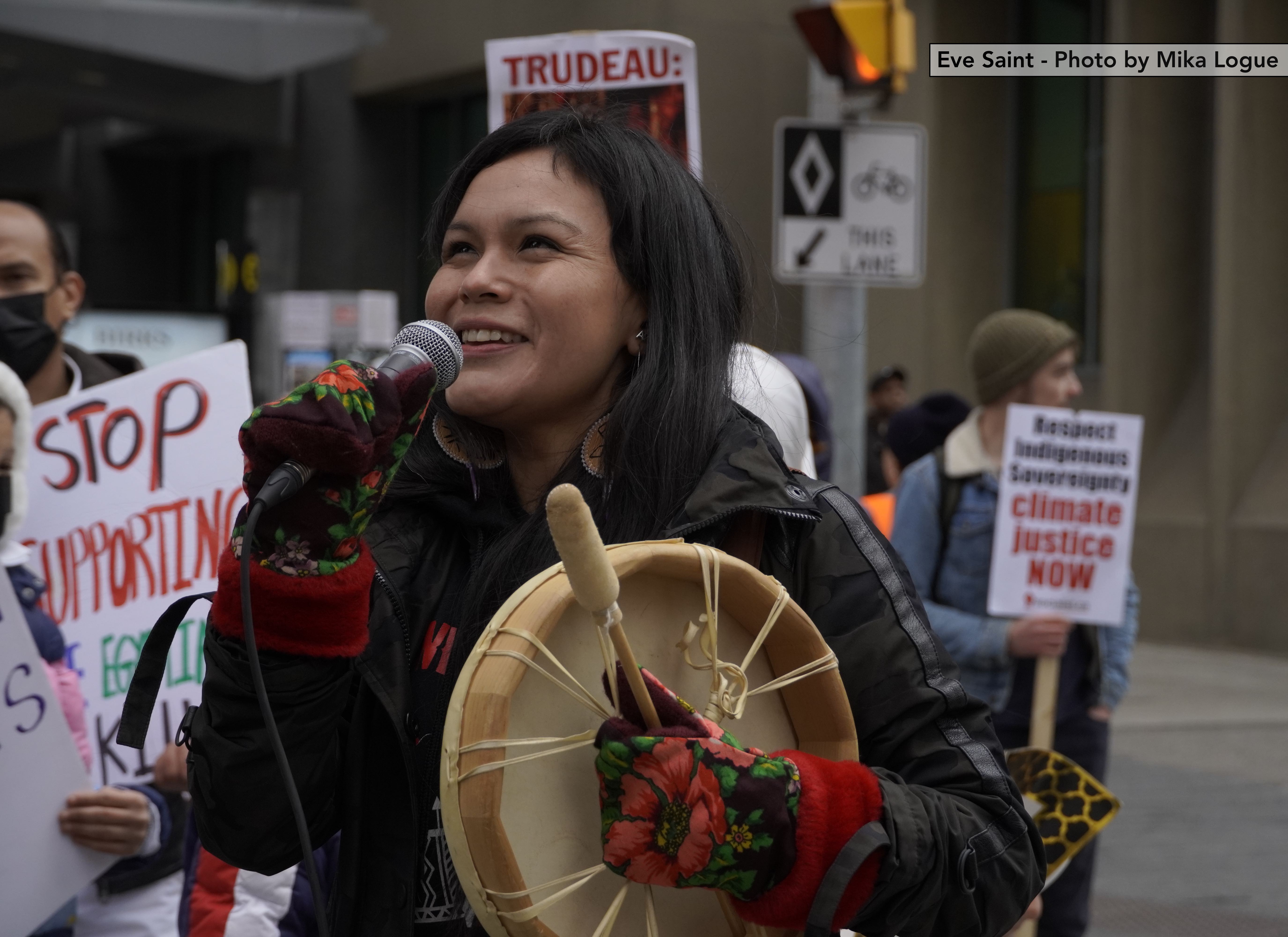 saying “[h]e was quite a force on fighting the Coastal Gaslink pipeline. He dedicated a lot of his life standing with the people, standing for mother earth….right now, they’re having a funeral out there as we speak…”

She gave a stirring speech, saying, “yes, we are still fighting this pipeline and we’re not going to stop. Sleydo and other Wet’suwet’en land defenders along with my little sisters are still at camp, they’re still holding space. They are still facing police and RCMP harassment, surveillance and brutality. Every single day they face this and they are not going to give up….So they need us. They need us right now.”

She reminded us, saying, “you know when we shut down Canada, you know how much power we had? Because of us shutting it down, it forced these…politicians, these so-called leaders, to meet with the hereditary chiefs…So remember, every time you show up is the power we have together.”

Eve urged everyone to “continue to answer the calls for action [from Sleydo and the Wet’suwet’en hereditary chiefs] because we’re in this fight, we’re in this climate crisis and it's up to us…we gotta fight for those future generations and mother earth and continue this work.”

The mobile rally came to a close on the vibrations of the drums and the echoes of the singers’ last notes, calling everyone to hear deeply, to know connection, to stand for human rights, the rights of all living things and with the rallying cry, “ten times we will triumph.”