When the Truth and Reconciliation report was released in 2015, many saw it as a chance to finally acknowledge the past and move forward together in a harmonious relationship with the Indigenous peoples on whose land we live and work. Fast forward to five years later and while the ongoing COVID-19 pandemic continues to threaten peoples’ health and disrupt their lives, industry is pushing ahead with projects that disregard Indigenous rights, including the right to Free, Informed and Prior Consent. From east coast to west coast, we continue to see racist harassment and violence directed against Indigenous people, often in the name of land and resource theft. Government is complicit in these ongoing acts of colonial violence whether they support industry outright or stand aside and do nothing. Both stances are an abdication of duty. They are the continuation of a genocidal Canadian protocol that puts profits above the health and wellbeing of Indigenous communities, valuing industrial projects more than human rights. 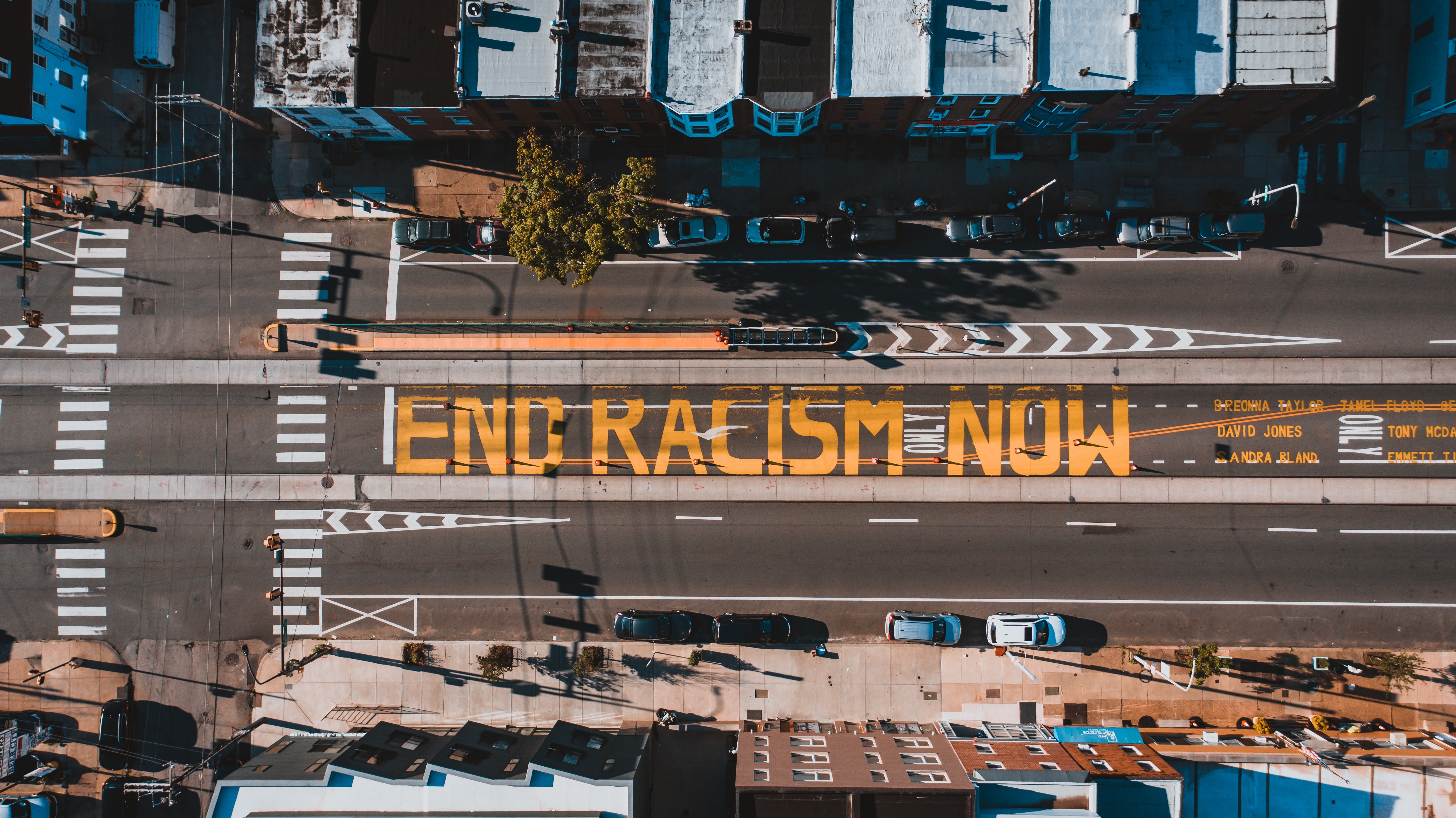 Here is a look at some current Indigenous rights violations, and how we can help.

Wet’suwet’en territory is being threatened by the building of a pipeline called the Coastal GasLink, a corporate project operated by TC Energy. The 670 metre pipeline will run through Wet’suwet’en territory (Yintah) across Northern BC, endangering the lives of both community members and the environment they live in. The pipeline builders have been caught in several violations, including clearing protected wetlands. They continue to construct man camps that endanger women and two-spirited people and make the community more vulnerable to COVID-19. All five clans have unanimously opposed the pipeline yet are being arrested by the RCMP for protecting their unceded territory.

Right now, Coastal Gaslink begins test drilling below the headwaters of the river Wedzin Kwa, which nourishes the entire territory. A stand off is ongoing, with RCMP trying to remove Wet’suwet’en community members who are occupying their own territory in order to protect the waters and uphold their laws.

The Wet’suwet’en are calling for solidarity actions on the Gidimt’en Yintah Access site.

To donate, see a current go fund me here. You can also donate to the legal fund at Raventrust or directly to the Unist’ot’en camp here.

Also in BC, the Secwepemc people are defending their unceded territory against the government-owned Trans Mountain Pipeline Expansion. This monstrous project has ballooned in cost to $12B on the books, with more costs expected. Because it is government owned, this makes tax payers unwitting shareholders in the environmentally destructive project. The Secwepemc people are building tiny homes along the path of the pipeline to block the project, and have become known as The Tiny House Warriors. They demand no man camps, no bitumen near their waters and no pipelines built on their lands. They too are being targeted for arrest. Several violent incidents have been committed against them for defending their land.

Happening right now, as of October 16th, five were arrested for standing in opposition to construction, including drilling underneath the Thompson River. Arrestees include Hereditary Chief Seqwses and his daughter as well as a former Trans Mountain engineer. The Secwepemc also delivered a Cease and Desist letter to TMX Pipeline corporation for a second time. The UN has also advised that construction on the unceded territory without consent should stop.

You can donate here.

In Ontario, near Caledonia, the Six Nations of the Grand River are defending unceded territory from development. Previously known as McKenzie Meadows, the area has been re-dubbed 1492 Land Back Lane.

The graphic below, is found on the Six Nations Lands and Resources website which shows the Six Nations original tract and in red, the area remaining to them. Caledonia falls just above the top right corner of that remaining area. Also see the booklet "Six Miles Deep, Land Rights of the Six Nations of the Grand River". 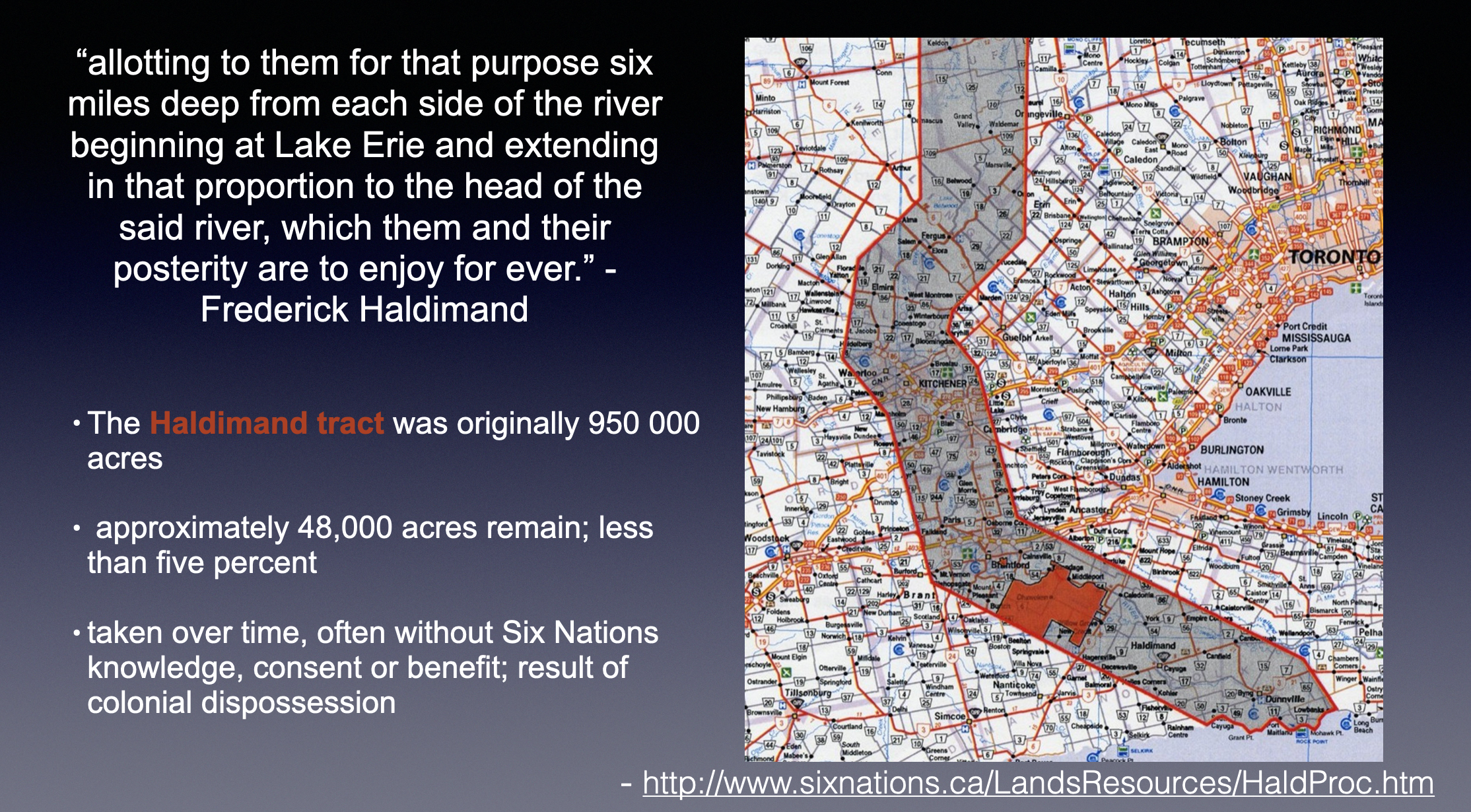 Peaceful resistance by land defenders has been met by court injunctions and Ontario Provincial Police enforcement, including rubber bullets. After discussions, the Haudenosaune land defenders removed most of the roadblocks that they had in place. They continue to camp in and occupy their own territory and the Ontario Provincial Police has gone from arresting land defenders to also targeting those who bring supplies to the protestors and journalists, some being arrested long after leaving the site. The graphic below is from Fridays for Future's Instagram and features Alicia Elliott's twitter quote. 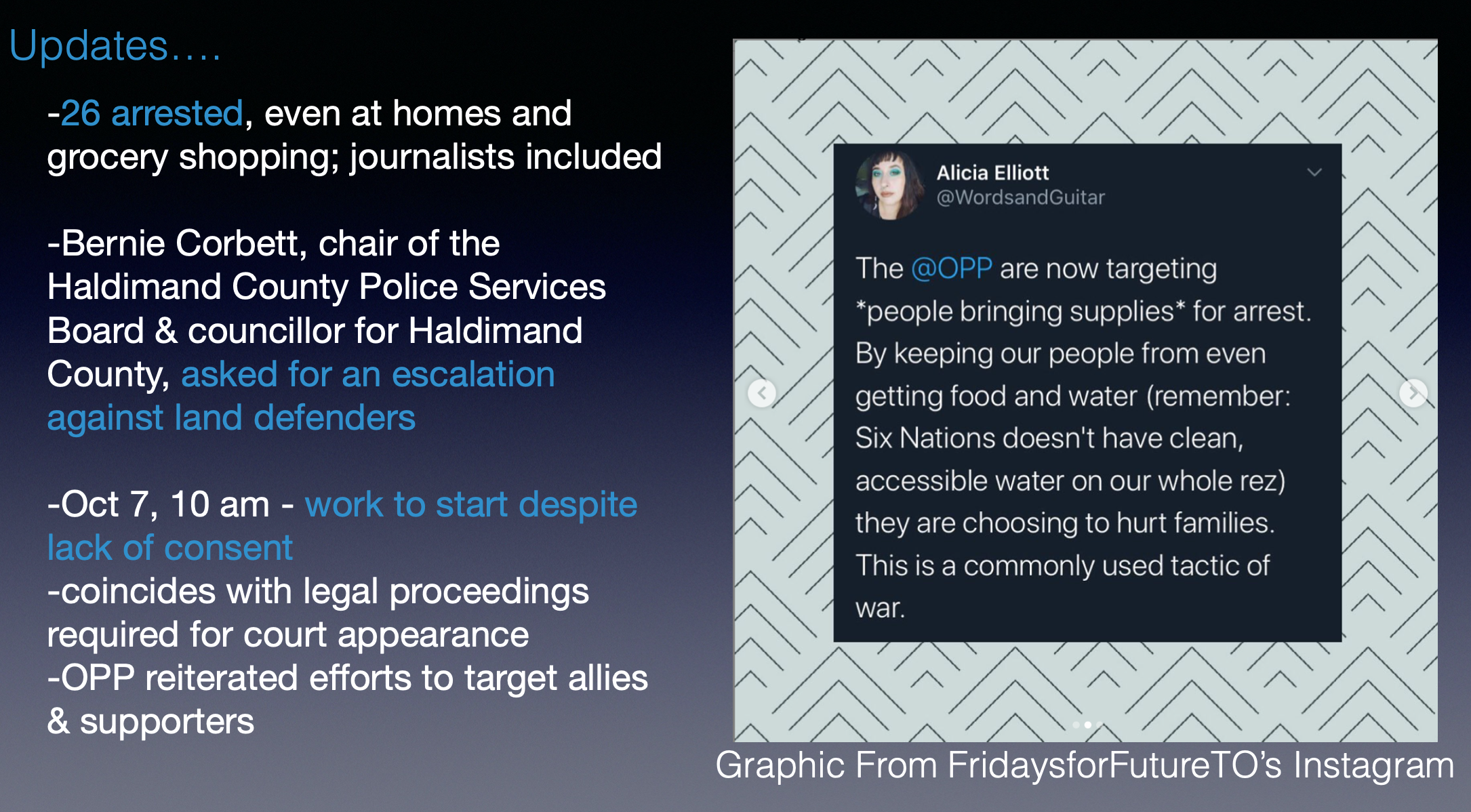 As Niagarans Sean VanderKlis and Karl Dockstader of the “one dish one mic” radio program write in the post the Top 11 questions about 1492 Land Back Lane, “Canada needs to reconcile its own systemic racism before it labels land defenders - mothers, fathers, children, and their friends who care about preserving the very existence of their way of life - as criminals standing in the way of Canada’s short sighted economic interests” and “supporting a financial system that reinforces a status quo that benefits few at the expense of many is toxic; forcing pipelines on Canadians and First Nations people without any real measure to stop them is toxic…”

The Demands below accompanied a call out for solidarity actions.

Sabrina Constance YouTube Video of Skylar re: escalation of OPP action against land defenders the day after Orange Shirt Day.

Yellowhead Statement Regarding Arrests At 1492 Land Back Lane

Donate: go to Go Fund Me Legal Fund or send an e-transfer to [email protected]

Below from Niagarans Sean VanderKlis and Karl Dockstader of One Dish One Mic radio station:

-Visit Camp and bring supplies - “just past the corner of Mackenzie and Fuller in Caledonia….drug, alcohol and violence free….be mindful that standing on the property can lead to arrest and charges…”

-Tell people about the camp “ask them how they would feel about being in the situation the people of Six Nations are in, and have a discussion.” - Top 11 questions about 1492 Land Back Lane

Once the site of a violent stand off between land defenders and RCMP in response to a golf course expansion, Oka is now facing another kind of violation as the Kanien’keha:ka people experience an archaeological dig on their territory. Many sacred, traditional items are being torn up from under the ground, leaving the area in shambles and the people bereft.

The Algonquin and Cree of Barriere Lake are calling for a moose moratorium due to declining populations in the Quebec area. Moose are a traditional source of sustenance for Indigenous peoples, and they are being over-hunted by the non-Indigenous. An injunction was granted forcing the Indigenous to remove the signage and barriers they had up to deter non-Indigenous hunters as once again, our colonial justice system works against instead of in favour of the original dwellers of the land. 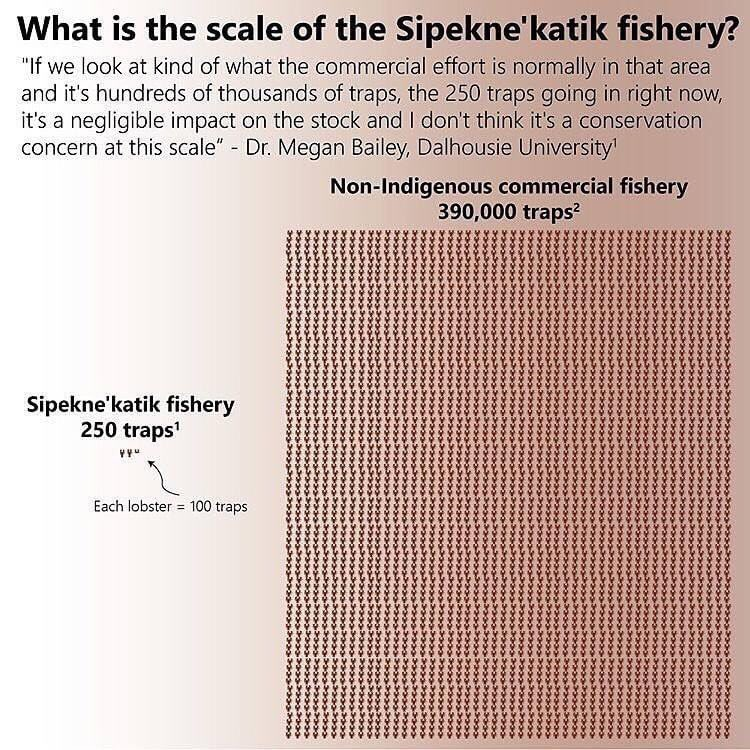 On the east coast, in what has become a rapidly escalating situation, Mi’kmaw fishermen are being attacked for fishing in their own coastal waters. Protected by treaty rights allowing them to make a livelihood from the water, the Indigenous peoples are being harassed and threatened for setting lobster traps despite their right to do so. From circling the Indigenous boats, to firing flares dangerously close to them, the non-Indigenous commercial fishers continue to terrorize the Indigenous fishers. As of October 19, after multiple acts of violence and intimidation, only one charge has been laid. The excuse of modern rights vs historic treaties is being used as a means to deflect responsibility. As of October 16, the violence has resulted in a Mi’kmaw fishing vessel and a worker van being set on fire, mob attacks and multiple acts of arson. As well, hundreds of lobsters were killed with chemicals in a wasteful display meant to intimidate Indigenous fishers and in violation of their protected treaty right to make a livelihood. Graphic tweeted at: https://twitter.com/Jus5tice_4_All/status/1309128033287180289?s=20 Infographics & details by: @LaurenThompson

These are just some of the more recent violations the country continues to perpetuate against the Indigenous, as it continues to steal from them. There are also the long standing water boil advisories that were supposed to have been lifted by now. There is the Aamjiwnaang of Sarnia, who reside in what is known as Chemical Valley, living in the shadow of the Suncor refinery that is polluting their water with chemicals and damaging the land. There is the Grassy Narrows First Nations who are re-experiencing the fear of the mercury poisoning they faced 50 years ago at the hands of a paper company, as the Ford government ends assessments for clear-cut logging. Time and time again, "KKKanada", as Kanahus Manuel, leader of the Tiny House Warriors camp names the country, acts in ways that harm Indigenous communities and compel them to defend their lands and waters.

To acknowledge that there are existing treaty rights means nothing if they are being flouted again and again. A system in which the RCMP and OPP operate as pointy sticks for the state, perpetuating systemic racism and wielding an armed power directed at people like clan chief Allan Adam of the Athabascan Chipewyan, who was beaten by RCMP during a confrontation over an expired license, must change. A system in which Indigenous fishermen are being attacked in broad daylight with no repercussions for the attackers, must be fought. It is time to defund the police. It is time to close the loophole that allows industry to directly fund weapons for police forces. It is well past time for the country to legally adopt and actively protect Indigenous rights.

Now more than ever, as biodiversity loss, climate crisis and systemic racism continue to endanger peoples’ lives and wellbeing, we must stand in solidarity with Indigenous land defenders who work to stop the degradation of their lands and culture. Indigenous rights are a vital element in the struggle to preserve a livable world and to create a regenerative future, one that is healthy and safe for everyone. Standing in solidarity may be a form of self preservation, but it is also the right thing to do. The theft of land and resources from Indigenous peoples, and the ongoing harm against their bodies and livelihoods must stop. Indigenous rights and partnership with Indigenous peoples is the only path forward.